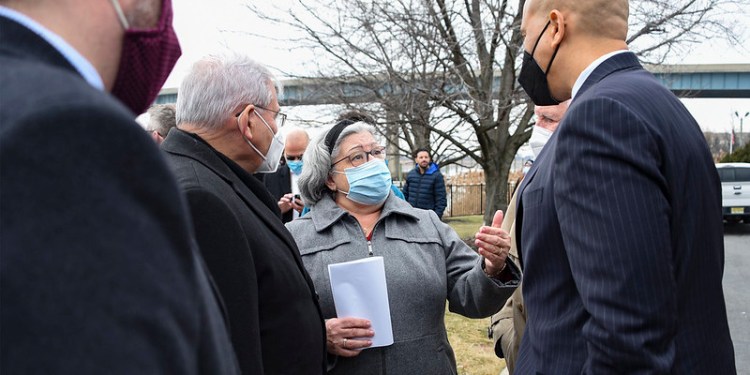 Alongside plans to replace one of the most heavily used and oldest bridges in New Jersey, the state’s top officials unveiled their vision to add a new light rail connection between the Meadowlands and Secaucus Junction train station.

As part of a $143.6 million federally-funded project to construct a new eastbound Route 3 bridge over the Hackensack River, the span will be built to hold a future light rail light that could allow for easier access to destinations at the Meadowlands in East Rutherford, such as the American Dream megamall and MetLife Stadium.

Adding the capacity to lay down a light rail connection across the river, linking East Rutherford and Secaucus, “is, in and of itself, a potential gamechanger” because it would relieve “a lot of the traffic in and out of MetLife and American Dream,” Murphy said.

“That is an option that we will have as a state, obviously an option we want to pursue,” the Democratic governor said.

‘We Have A Vision’

Gutierrez-Scaccetti said, “We have a vision for the Secaucus Junction train station to make it a hub for those who wish to come and enjoy entertainment at American Dream, or a game at the stadium.”

“We have a vision that says you can come from Boston or Washington, take a nice train ride, get off at Secaucus, and hop on a monorail type system that may allow you to travel all the way through without being in your car,” she said.

Last year, the state announced it was moving forward with a long-awaited $220 million project on the south end that will extend the light rail line by a half mile to a new station in Jersey City west of Route 440 to support the planned development on the Hackensack River waterfront.

Built in 1934, the Route 3 crossing is now in “the worst condition of any bridge in the state” and needs to be replaced “sooner rather than later,” Gutierrez-Scaccetti said.

More than 150,000 vehicles cross the bridge daily, connecting drivers to the Lincoln Tunnel, NJ Turnpike, Route 21, Route 17 and Route 46. It has also become the site of frequent emergency repair work that has triggered significant traffic jams along an already busy route into New York City.

Rebuilding the bridge “is going to be a reality,” Menendez said.

“We’re not standing here today and saying, ‘We look forward to trying to fight for monies for a bridge that’s going to do this or that,’” the senator said. “The money is here, the design is going to begin and that means we are going to see success.”

According to officials, the new bridge will be built north of the existing one and raised to accommodate marine traffic.

The project is currently in the design phase and construction expected to begin in two years, however no estimate was provided on when it will be complete.

After work starts, crews will begin installing piers into the Hackensack River to support light rail to make sure “the bridge is ready,” said Gutierrez-Scaccetti, adding, “It’s the wisest use of our dollars.”

When it comes time to build the light rail tracks, Gutierrez-Scaccetti said the state hopes it will be done via a public-private partnership, in which a private-sector company constructs and operates the system.

The replacement of the Route 3 bridge will be among the first New Jersey projects funded by the $1.2 trillion bipartisan federal infrastructure package signed by President Joe Biden in November.

Over the next five years, the Garden State is expected to get $1.14 billion to upgrade and repair over 500 bridges across the state considered to be in poor condition. The state will receive an initial installment of $229 million in 2022.

Pascrell echoed the sentiment, saying, “Paired with the major Gateway Tunnel milestone we recently achieved, the investments we are announcing today will make sure that the travelers moving on these roads won’t lose an extra minute of their lives.”

The allocation will include funding for roads, ports, power grids, railways, broadband internet and water systems.

Booker called the funding “the greatest one-year investment in New Jersey we have seen in federal governance in over a century” and said it will not only upgrade infrastructure but create thousands of jobs, positioning the state “to build a stronger economy that will help us to recover from this pandemic.”

According to Federal Highway Administration, the Route 3 Bridge alone would support 1,859 jobs both within and outside the construction industry. Another 13,000 jobs will be created by the additional $1 billion of bridge work secured by the Congressional delegation.

Pascrell: No State Relies On Its Roads More Than NJ

Prior to announcing the plan to rebuild the bridge, Menendez led his colleagues in singing ‘Happy Birthday’ to Pascrell, who turned 85 on Tuesday — just three years younger than the Route 3 span.

“Revitalized bridges are the best presents any of us could dream of,” the congressman said, who gave a fiery condemnation of Republicans who voted against the bill. “There’s no state in the union that relies on its roads and bridges more than New Jersey.”