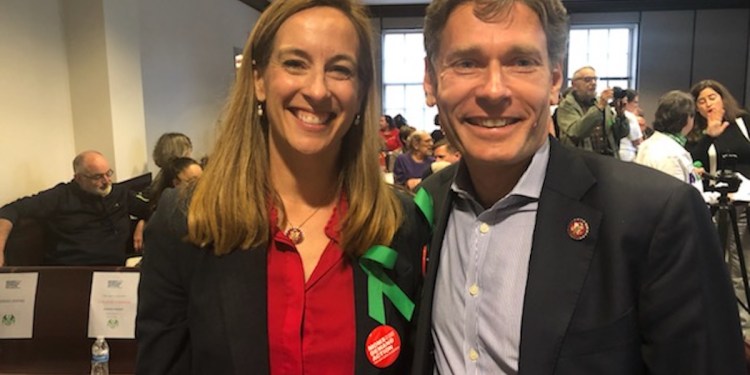 While the filing date to run for Congress in 2022 is still months away and the primary in New Jersey beyond that, the primary fields for both parties are taking shape.

North Jersey will have at least one new member as Rep. Albio Sires announced that he was retiring and would not seek re-election in 2022. And a new congressional map has strengthened some districts for Democrats while weakening one that places an incumbent in danger of flipping from Blue to Red.

The six districts in the North-JerseyNews.com coverage area are held by Democrats. National Republicans believe the path to regain the House goes through New Jersey this Fall. Following is an overview of the districts and who is running.

Democrats: Rep. Josh Gottheimer is the only announced candidate for this party at the moment. Seeking a fourth term, Gottheimer won the 2020 race by a 7.6% margin. The Wyckoff resident, who starts the year with $10 million to spend for his campaign, faced a primary challenge from the progressive wing of the party in 2020 from former Glen Rock Councilwoman Arati Kreibich.

Republicans: Three challengers are currently in the race to be the GOP nominee. Investment banker Frank Pallotta, who lost a race to Gottheimer in 2020, is seeking the nomination again. Two new challengers are in the race as well— Nick De Gregorio, a U.S. Marine Corps veteran who served in Iraq and Afghanistan and businessman Fred Schneiderman. A Fair Lawn resident and a newcomer to politics, De Gregorio’s campaign reported raising over $400,000 on his year-end report for 2021 and has won the backing of District 39 Assembly members Robert Auth and DeAnne DeFuccio. Meanwhile, Cresskill businessman Schneiderman has assembled a campaign team that includes former President Donald Trump aide Kellyanne Conway and Jamestown Associates, a top-tier Republican media firm that has created TV ads for both of Trump’s presidential campaigns and for dozens of successful U.S. Senate, gubernatorial and congressional races.

New Map: The district is now made up of all of Hunterdon and Warren counties, parts of Morris, Somerset, Sussex and Union. A district previously leaning Blue, the additions from Warren and Sussex while removing some Democratic strongholds makes this a national race Republicans are putting resources in to win.

Democrats: Rep. Tom Malinowski, after some deliberation at the end of the year, will defend his seat in seeking a third term. Malinowski won by 5,000 votes in 2020 and is one of a number of Congressman under investigation by a House ethics committee for failing to follow the proper protocols for filing stock trades.

Republicans: Sensing an opportunity with the new map, eight Republicans have declared their intentions to challenge Malinowski. The favorite is former State Sen. Tom Kean, Jr., son of the former governor, who was the party’s nominee in 2020 and came within a percentage point of defeating the incumbent. The frontrunner will face a strong challenge from Assemblyman Erik Peterson (R-23), a conservative who led the Republican rebellion in December against COVID-19 health protocols in the Statehouse. Other notable candidates are Fredon Mayor John Flora, who originally declared to run in the 5th District but switched after his town was placed in CD7; Phil Rizzo, a former pastor and real estate developer who ran for governor in 2021; businessman John Henry Isemann; Sterling Irwin Schwab, a U.S. Navy veteran from Flemington; Kevin Dorlon, a licensed public works contractor from Long Valley; and perennial candidate Robert Trugman.

New Map: The district is now made up of parts of Essex, Hudson and Union counties. With two thirds of the district consisting of Hudson County, this North Jersey seat is one of three Democratic strongholds in North Jersey.

Democrats: Rep. Albio Sires is not seeking re-election to the seat he’s held for 16 years. Lawmakers on local, state and federal level quickly backed Robert J. Menendez, a Port Authority commissioner and the son of Sen. Bob Menendez, for the seat previously held by his father. Two candidates plan to challenge the younger Menendez—Ricardo Luis Rojas, who managed an unsuccessful primary campaign against Sires in the last election, and David Ocampo Grajales.

New Map: The district is made up of Bergen, Hudson and Passaic counties. The district exchanged parts of Bergen County with the 5th District and gained Pompton Lakes, North Haledon and parts of Wayne from the 11th District.

Democrats: Rep. Bill Pascrell, who turned 85 on Jan. 25, will run for his 14 term in office. Pascrell was first elected in 1996 from the old 8th district, defeating incumbent William J. Martini. He has represented the 9th since 2012 after winning a primary against incumbent Rep. Steve Rothman.

Republicans: Two members of the GOP have announced their intention to win the party’s nomination. Paterson native Billy Prempeh, a U.S. Air Force veteran who ran against Pascrell in 2020, is pitted against first-time candidate Patrick Quinn, a realtor who had been running in the 11th when redistricting moved his hometown to the 9th.

New Map: The new map is 56% in Essex County, with the rest divided between Hudson and Union. The district is a dominant one for Democrats, with 81% of voters registered with the party.

Democrats: The real election for this seat will happen in the primary set for June 7. The seat has been occupied by a Payne since 1988—first by Rep. Donald Payne and then by his son, Rep. Donald Payne, Jr. after the passing of his father in 2012. Payne has two announced primary challengers: Imani Oakley, who has had multiple jobs in politics over the last few years including Legislative Director for the New Jersey Working Families Alliance; and Akil Khalfani, a sociology professor at Essex County College who ran as an independent in 2020.

Republicans: No candidates from the GOP have announced their intentions to run for the seat.

New Map: A majority Morris County district, it includes towns from Essex and Passaic counties. Maybe the most reshaped of all districts, the 11th received towns from the 7th, 8th and 10th CD’s while exporting municipalities to the 5th, 7th, 9th, and 10th

Democrats: If Rep. Malinowski’s road to returning to Washington was made more difficult, the biggest beneficiary may have been Rep. Mikie Sherrill. A seat held by a Republican since 1984 before Sherrill won in 2018, the newly written district was a plus 10 for President Joe Biden. More importantly for the Navy veteran, Sherrill has a warchest approaching $5 million for this election cycle.

Republicans: While it seems that anyone who is a Republican in the 11th District is running for the nomination, it is actually seven candidates who have declared—and two other big names still deciding to jump in. The name that GOP leaders want on the ballot is reportedly Assemblywoman Aura Dunn (R-25), a former Sesame Street lobbyist and top aide to Rep. Rodney Frelinghuysen. At a screening of candidates in Passaic County, published reports stated she ended her remarks to the Passaic GOP with “Once again, my name is Aura Dunn, and I am running for Congress.” Additionally, 2020 nominee Rosemary Becchi has not yet declared if she will attempt to unseat Sherrill after losing by a 53-47 margin. Those that have declared for the race include Morris County Commissioner Tayfun Selen; Morris County GOP State Committeeman Larry Casha; former assistant Passaic County Prosecutor Paul DeGroot; former Ridgefield Park Councilman Robert Kovic, who now lives in Sussex County; attorney Larry Friscia; Iraq War veteran Toby Anderson; and screenwriter Hillery Brotschol.