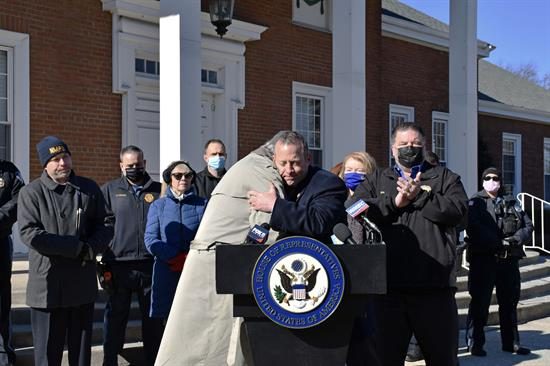 Rep. Josh Gottheimer is continuing his push on Capitol Hill to enact more measures that will better protect against the threats of terrorism, antisemitism and extremism, both in the U.S. and abroad.

The 5th District congressman has once again called for regulations to strengthen information collected by vehicle rental companies and dealers in order to deter lone-wolf terrorists from committing truck attacks — similar to the one that killed New Milford resident Darren Drake on Oct. 31, 2017.

Passed by a vote of 397-15 in October 2021, the Darren Drake Act would require the U.S. Department of Homeland Security to develop and disseminate best practices for vehicle rental companies and dealers to report suspicious behavior to law enforcement, helping them stop potential threats in their paths.

The bipartisan bill, sponsored by Gottheimer and co-sponsored by Rep. Brian Fitzpatrick (R-PA), was named in memory of Drake, who was killed in an ISIS-inspired terrorist truck attack on the West Side Highway in New York City.

Since then, Gottheimer has been working closely with Drake’s parents, Barbara and Jimmy Drake, to craft and advance legislation. Now, he is pushing for the bill to be introduced and passed in the U.S. Senate.

‘There Is No Time To Waste’

During a Jan. 26 press conference in New Milford, the Drake family and several local officials joined Gottheimer in his call to get the bill across the finish line.

“It’s hard to believe that it’s been four years since New Milford and the Drakes lost Darren. Four years since an ISIS-inspired lone wolf terrorist rented a vehicle, used it as a weapon of terror on the West Side Highway, and killed their son and other innocent souls.  Four years since Darren’s dad, Jimmy, sat across from me and, with tears in his eyes, declared that no other family should suffer what he, his mother, Barbara, and their family had – and that we must take action, in Congress, in the country they love, to stop any terrorist on American soil from deploying the same heinous tactics that had killed their son,” Gottheimer said.

The Darren Drake Act, he said, is a “commonsense, bipartisan bill aimed at stopping ISIS-inspired, lone-wolf, and domestic terrorists from easily acquiring trucks and other vehicles to wreak havoc and cause mass destruction and death.”

“But it is just one critical weapon against the alarming rise in terrorism, extremism, and acts of hate in the United States and around the world. There is no time to waste. And we must use every weapon in our arsenal against terror,” the congressman said.

‘Any And All Steps Possible’

Gottheimer is also calling for several other measures to be taken.

The congressman, who sits on the Homeland Security Committee and Financial Services National Security Subcommittee, said, “There is more we can do to prevent lone-wolf terror and build systems to protect against all types of attacks.”

“And, as violent extremists and lone-wolf terrorists remain a national threat priority for the United States Department of Homeland Security, we must take any and all steps possible to fight back and keep our communities safe,” Gottheimer said.

Additionally, Gottheimer is leading a bipartisan group of 42 House lawmakers calling for an end to the United Nations Human Rights Council’s (HRC) “discriminatory and unwarranted treatment of Israel.”

In a Jan. 25 letter, they urged U.S. Secretary of State Antony Blinken to work to shut down the HRC’s newly-formed Commission of Inquiry (COI) on the Israel-Palestinian conflict. And while they applauded the Biden administration’s “multiple clear statements of opposition to the COI, including its Dec. 24 vote to entirely defund” the probe, the group requested the White House pressure Congress not provide funding to the effort.

Created in May 2021 by the UN Human Rights Council, the COI is a permanent and ongoing, independent inquiry into alleged violations of international humanitarian law and international human rights law within the Occupied Palestinian territory and in Israel leading up to and since April 2021, when tensions between the sides escalated.

The COI was ordered to report to the HRC – annually – with a first report due in June and will report every year to the General Assembly in New York, beginning in September.

COIs, or fact-finding missions, launched by the HRC typically have an expiration date, with most lasting several months to a few years.

And, until now, none have had an “ongoing mandate,” which the Congressional members said they believe “is designed to accelerate the political, economic, and legal challenges to Israel and undermine its legitimacy by pressuring international legal institutions to take action against Israeli leaders.”

In their letter, the lawmakers wrote, “This commission will not only focus on the actions Israel took in Gaza as it sought to defend its citizens from unprovoked rocket attacks. It will also have a carte blanche mandate – in perpetuity – to investigate any allegations against Israel in the past or in the future whether in the West Bank or Gaza or in all of Jerusalem, and even within the recognized pre-1967 borders of the State of Israel.”

After noting that the UN already has six other bodies focused on Israel, the lawmakers pointed out, “There are no commissions of inquiry on the mass genocide of Uyghurs in Xinjiang or specific mandates toward Hamas, an internationally designated terrorist group.”

‘Ought To Be Cancelled’

They also went on to say that the permanent inquiry reflects “continued broader bias against Israel,” since other UN-led investigations of Burundi, Libya, South Sudan, Syria, Venezuela, and Yemen have yet to be renewed.

Instead, lawmakers said, the UN “should be using its resources to fulfill its mission of promoting human rights around the world – not singling out a country that was attacked by more than 4,000 rockets aimed indiscriminately at civilian populations.”

They also added: “This COI is outrageous and ought to be cancelled. With the UN budget in crisis, stretched by the COVID pandemic which affects all humanity, it is irresponsible to spend precious resources on yet another unjustified U.N. investigation of Israel.”