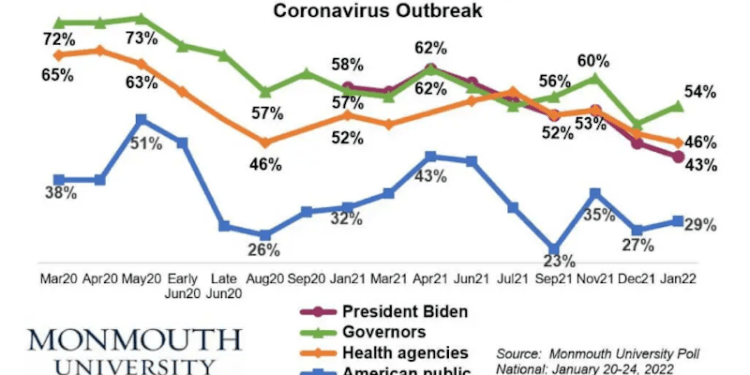 Americans are concerned about the spread of COVID-19 but are ready to accept it as part of a new normal in their life.

Those are the sentiments gleaned from the national Monmouth University Poll released Jan. 31. A majority of respondents continue to support some preventative measures, such as face masks and social distancing guidelines, but not others, such as workplace vaccine mandates. But faith in the ability of President Joe Biden and the federal government to get a handle on the pandemic is declining amid persistent opposition from anti-vaxxers.

The most lopsided result in the poll is how Americans feel their fellow citizens have done in responding to the pandemic. Opinion on how the public is dealing with the pandemic remains largely negative at 29% good job and 58% bad job, remaining virtually unchanged but up from a December 2021 27%/56% split.

The Jersey Shore polling outfit found 70% agree with the sentiment that “it’s time we accept that COVID is here to stay and we just need to get on with our lives”—including 78% of those who report having gotten COVID and 65% of those who say they have not been infected. But, as past polls have indicated, there is a partisan divide as 89% of Republicans and 71% of Independents agreed with the statement compared to 47% of Democrats.

Only 34% of the public feels the country will get the outbreak under control and return to normal by the end of the year. The number who believe a return to normalcy will never happen continues to grow—28% in the latest poll, up from 22% who felt this way in September and just 6% who were similarly pessimistic exactly a year ago.

“Americans’ worries about COVID haven’t gone away. It seems more to be a realization that we are not going to get this virus under control in a way that we thought was possible just last year,” said Patrick Murray, director of the independent Monmouth University Polling Institute.

The shift in public opinion comes as 40% report that they have had or think they have had COVID since the pandemic began in March 2020, including 27% who said their infection was confirmed with a test. About one-third (36%) of people who have been vaccinated report also being infected with COVID compared with 61% of those who have not gotten a shot say they have been infected with the virus.

With the recent surge fueled by the Omicron variant waning in the Garden State, over half the the public when combined is either very (23%) or somewhat (27%) concerned about catching one of the new COVID variants. This concern includes 58% of those who have not had COVID and includes 38% of those who have already had it.

Omicron seems to have affected respondents’ views on the number of adults who are very concerned about catching a new variant, up from 14% in early December. Similarly, the number of people who are very concerned about a family member becoming seriously ill from the virus (38%) has increased since December (30%), but it is still lower than concern in September (45%) when the Delta variant was spreading.

“A key factor in the public’s inclination to accept having to live with COVID is the intransigence of a sizable segment of the population on vaccination. It seems unlikely that herd immunity could ever be achieved through preventative measures,” said Murray.

Two of the more polarizing health protocols in fighting the spread of the virus continue to see support slipping. For a face mask mandate, 52% were in support of instituting face mask and social distancing guidelines in their home state. This number is down from December (55%) and September (63%), but is the same as last July (52%) when COVID’s spread hit its lowest ebb so far.

And under half—43%—support requiring some sort of vaccine passport in order to work in an office or other setting where they are around other people. Support for this approach has declined steadily since September (53%), including 46% last month.

“We still see public support for maintaining some degree of public safety around COVID. However, there appears to be an acknowledgment that federal measures have not been effective, or at least have failed to be widely accepted,” said Murray.

Ratings for how both the president and federal health agencies have handled the pandemic continue to slip as well. Just 43% say President Biden has done a good job on this while 53% say he has done a bad job—the first time his rating on this metric has been underwater since he took office.

Public opinion on the President’s handling of COVID was evenly split in December 2021 ast 46% and was consistently positive in polls prior to that. Views of federal health agencies’ handling of the pandemic have now dipped into negative territory (46% good job/47% bad job) after declining but remaining positive a month ago (48%/41%).

At the same time, ratings for state governors’ COVID handling have improved slightly (54% good job and 41% bad job, compared with 50% good and 41% bad in December).

As for those that have passed, the state reported 115 confirmed deaths, bringing that total to 28,628. The state listed probable deaths at 2,919, bringing the overall total to 31,547. State officials noted 54 deaths occurred in the last 24 hours of reporting that have not yet been lab confirmed.

The state’s dashboard had a count of 2,919 patients hospitalized as 71 hospitals in the Garden State filed reports Feb. 1. By region, there were 1,112 in the North, 1,045 in the Central and 762 in the South—the first time under 1,000 since New Year’s Day. Of those hospitalized, 505 are in intensive care units and 430 on ventilators. A total of 278 patients were discharged in the last 24 hour reporting period.

Health officials noted 564 long-term care facilities are currently reporting at least one case of COVID-19, accounting for a total of 26,044 of the cases, broken down between 11,925 residents and 14,119 staff.

The state’s official death total will now be reported as those that are lab confirmed, sits at 9,021 on Jan. 31. The facilities are reporting to the state 8,414 residents deaths and 148 staff deaths.