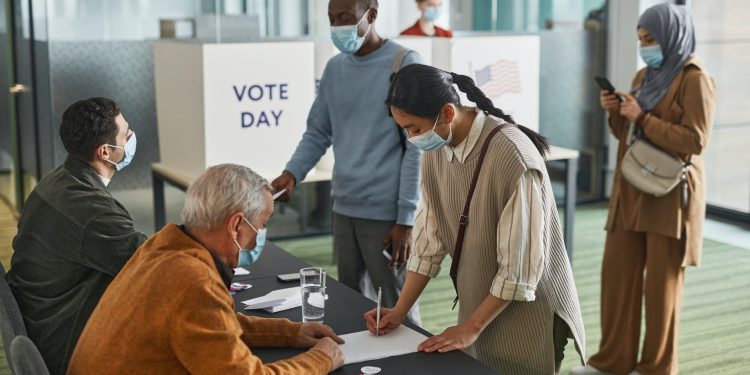 Photo by Edmond Dantu00e8s on Pexels.com

In a move designed to reduce voter suppression tactics at polling stations, Gov. Phil Murphy signed into law a bill that would reduce police presence on election day.

The bill, which featured sponsorship from Assembly members Benjie Wimberly (D-35),  Verlina Reynolds-Jackson (D-15), and Linda Carter (D-22), would protect voters from intimidation through the use of “poll watchers” and law enforcement officers (LEOs).

Past Examples in New Jersey

“We are in unprecedented times in this nation,” said Reynolds-Jackson. “Voter intimidation tactics and suppression have no place in New Jersey. We’ve seen the punitive effects of these anti-civil rights strategies in other states as well as in New Jersey in the past.”

The Democratic lawmakers pointed to the gubernatorial election of 1981 as an example of voter suppression in New Jersey. During that election, voters came across many uniformed and armed patrols operating under the National Ballot Security Task Force.

“A voter’s right to cast their ballot is a constitutional right that should remain unencumbered, and unthreatened,” said Wimberly. “Voter intimidation and suppression come in many forms and can happen anywhere. We’ve seen this done before right here in New Jersey. This new law makes it clear that there’s no place for these tactics here, in this general election or future elections.”

Additionally, before the 2020 presidential election, former President Donald Trump expressed in an interview his intention to deploy LEOs and U.S. attorneys to polling sites across the nation.

Under the law, a law enforcement agency would not be permitted to assign LEOs to any district board to enforce election laws, maintain order, or “peace and quiet” during the hours of registry and election. Additionally, LEOs would be prohibited from serving as a member of the district board of elections unless they were off duty.

Specifics of the Law

LEOs would be prohibited from remaining or standing within 100 feet of a polling place or ballot dropbox unless voting in a personal capacity or travel to, from, or remaining within their voting residence. They would be allow to escort citizens looking to vote.

Under the law, LEOs would still be allowed to enter a polling site in the case of emergency or a call for assistance during a disturbance. LEOs will only be permitted at the site until the specific emergency or disturbance was handled.

“There should be a clear separation between law enforcement and the electoral process,” said Carter. “Apart from responding to emergencies, law enforcement is not needed at polling places, particularly since their presence may intimidate voters and discourage them from casting a ballot. Every voter should feel comfortable going to the polls and performing their civic duty.”