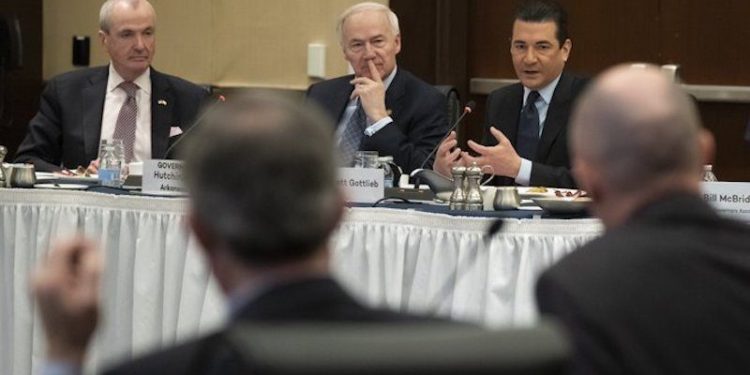 The summary assessment from the National Governors Associations about COVID is that the U.S. is trending in the right direction, according to Gov. Phil Murphy.

“The consensus is that we are on a road from a pandemic to an endemic,” said Murphy at a press briefing Feb. 2 that ended abruptly after 45 minutes due to a blaring fire alarm. “No one knows how straight the road is or how long it will take us…Please God that’s the way it continues.”

Murphy, who is vice chair of the governor association, noted that both Democratic and Republican governors were in step of where they wanted to end up. Meetings in Washington included President Joe Biden, Vice President Kamala Harris, members of the Biden administration and an updated on COVID from from head of the Food and Drug Administration Dr. Scott Gottlieb.

Getting Back to Normal

“The overwhelming sentiment from both sides of the aisle was we want to get to a place where we live with this thing in as normal a fashion as possible,” he said. “Good comparing of best practices among governors…Everyone is struggling with the road forward in that pandemic to endemic (as) none of us want to overmanage it or by undermanaging it getting clocked out of left field which we are all trying to avoid.”

The governor returned to a state where health officials noted the rate of transmission has been under 1.00 for the longest period of time, numbers continued to decline in other key leading health metrics and the state’s booster rate is almost double the national average.

“Trends that we are literally seeing across all metrics continue to suggest that the Omicron tsunami, as fast as it washed in, is washing out at nearly the same speed,” said Murphy

But Murphy warned that despite the drop in numbers, he is not completely comfortable in making any health protocols changes due to the recent history of how the numbers can quickly turn around.

“Everytime you think you have this thing figure out, it humbles you,” he said. “We do not want to test that theory with omicron so we have to remain on a vigilant footing.”

One area of increase were the most recent school numbers, as rates of in-school transmission have increased as schools that delayed all in-person instruction after Winter break returned. But Murphy offered there has been significant decrease in the overall rates of infection among all students and staff since their highs a few weeks ago.

“That speaks to the importance of the multi-layers approach we have in our schools and speaks to why we are not yet prepared to pull away any of these layers,” said Murphy. “But as I have said over the past week—and my conviction has only gone up—I look to a time in this school year where we are no longer masking in our schools.”

When asked when the health emergency would be lifted when it expires Feb. 11, the governor said it was an issue he would be discussing with State Senate and Assembly leaders in the coming days but would not comment one way or the other.

As for those that have passed, the state reported 107 confirmed deaths, bringing that total to 28,744. The state listed probable deaths at 2,919, bringing the overall total to 31,663. State officials noted 39 deaths occurred in the last 24 hours of reporting that have not yet been lab confirmed.

The state’s dashboard had a count of 2,170 patients hospitalized as only 60 of the 71 hospitals in the Garden State filed reports Feb. 1. By region, there were 721 in the North, 652 in the Central and 731 in the South. Of those hospitalized, 462 are in intensive care units and 187 on ventilators. A total of 318 patients were discharged in the last 24 hour reporting period.

Health officials noted 563 long-term care facilities are currently reporting at least one case of COVID-19, accounting for a total of 26,193 of the cases, broken down between 11,987 residents and 14,206 staff.

The state’s official death total will now be reported as those that are lab confirmed, sits at 9,046 on Feb. 2. The facilities are reporting to the state 8,429 residents deaths and 148 staff deaths.