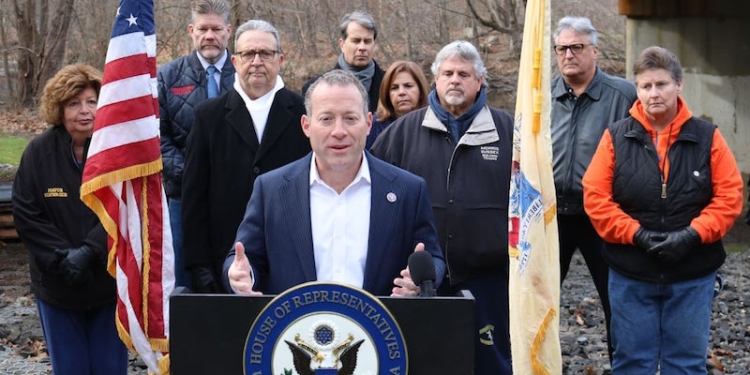 Rep. Josh Gottheimer was part of a coalition of House Democrats spanning the party’s ideological spectrum urging the U.S. Senate to pass a version of the Build Back Better agenda that centers on climate action.

In a virtual press briefing Jan. 31, Gottheimer joined representatives of the New Democrat Coalition and the Congressional Progressive Caucus to support a letter led by Rep. Mike Levin (D-CA) calling on President Biden “to move swiftly to finalize the most comprehensive legislation that can pass the Senate and get this historic progress to [his] desk for [his] signature in the coming weeks.”

“Fighting for clean air and water on our planet that our kids and grandkids can live in is something that has been a focus of mine since before I came to Congress and is something that is actually critical now and we can’t afford to wait,” said Gottheimer on a call organized by Climate Power and the League of Conservation Voters. “There is no time to delay. For Jersey. For our planet. We must take action to tackle climate change now to make sure our best days will always be ahead.”

Next Step After Infrastructure Bill

The co-chair of the Problem Solvers Caucus noted the bipartisan infrastructure bill was the first step that Congress made to deal with climate change but more is still needed as damages from Tropical Storm Ida and other storms in New Jersey have cost the state $50 billion over the last 10 years.

“These costs will get worse if we do not continue to act urgently,” proclaimed Gottheimer. “The cost of inaction is simply too high….We have an important opportunity to deliver another piece of the puzzle in fighting against climate change.”

Congressional Progressive Caucus Deputy Chair Katie Porter (D-CA) noted weather and climate related disasters cost taxpayers $145 billion dollars in 2021 alone as she recalled her personal experience with the Silverado fires in 2020. In the last two years, more than 6.9 million acres have burned in California because of wildfires that the Congresswoman said causes disruptions in education and healthcare.

“It’s fiscally irresponsible not to take action to mitigate these natural disasters, to prevent them, and to fight against the climate crisis,” said Porter. “We simply cannot afford to keep stalling on climate action. The price if we do not act today is just going to keep going up.”

The California lawmaker added that “the climate crisis is real and is not going to go away just because Washington fails to act.”

According to New Democrat Coalition Chair Rep. Suzan DelBene (D-WA), the Build Back Better Act’s climate change legislation would create American jobs, cut energy costs for families, build a more resilient future, and significantly reduce greenhouse gas emissions that moves the U.S. towards the goal of reaching net-zero emissions by 2050 at the latest.

“In order to deliver on climate, we must agree on a bill that can get 218 votes in the House and 50 votes in the Senate. New Dems believe there is a path forward by building on the existing areas of agreement and focusing on doing a few things well for longer,” said DelBene. “We’ll do everything in our power to prioritize that BBB Act prioritizes climate and is signed into law. The time to act is now and failure is not an option.”

Speakers on the call stated there is broad consensus among Democrats on these climate priorities and even support from Republicans on the issue.

“This is no longer just a conversation for climate activists; I think that every group and every decision we make as members of Congress has to take into account… the long term impact that we will have on our environment and our communities,” said Rep. Jahana Hayes (D-CT). “This is no longer a single issue conversation—the climate impact of legislation has to be incorporated into everything that we do.”

The Connecticut representative recalled her time as a teacher and the inability to provide clean drinking water to students due to lead piping—an issue that is addressed in the legislation.

“This is deeply personal to me…I was surprised at how hard we had to fight to get clean drinking water into these plans,” said Hayes. “We have to think of water as infrastructure. This should be non-negotiable.”

Rep. Abigail Spanberger (D-VA) said she was driven to address the issue due to the national security, health, and economic ramifications for the U.S. as the country is “consistently responding to reactionary decisions instead of making investments that are forward looking.”

The Virginia Democrat focused her comments on the impact on the rural and agricultural communities.

“Over the last few years we’ve seen firsthand how extreme weather fueled by the climate change we are all experiencing has not only disrupted lives in our communities but exacerbated long term challenges facing our air, soil, and water,” said Spanberger. “We need to deliver on climate smart practices that build on the tremendous work of our farmers who are already working to build a healthier climate. We need to invest in a cleaner grid and transportation system to be sure our rural businesses and communities are not left behind as we work to rebuild our economy in the wake of the pandemic.”