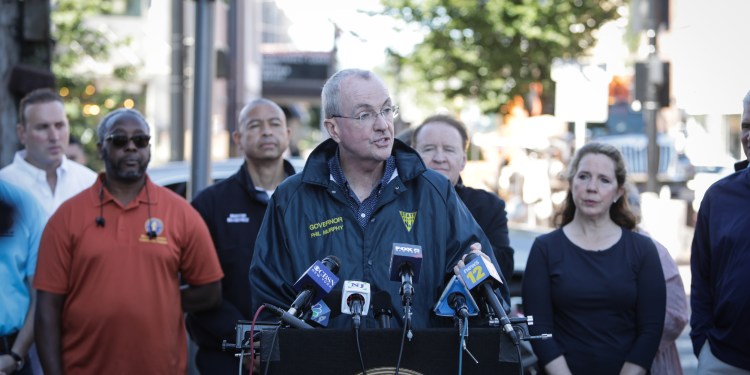 New Jersey state Senate Republicans have launched “Give It Back,” a new campaign calling on Democratic Gov. Phil Murphy to put an end to pandemic-related measures he has put into effect over the past two years.

In addition to walking back COVID-19 vaccine and school mask mandates, the initiative demands Murphy restore the balance of power between the governor’s office and state Legislature and return a $3 billion budget surplus to taxpayers.

As part of the push, the GOP is encouraging New Jersey residents and business owners to take to social media and newspaper opinion pages to “tell Gov. Murphy, in a unified voice, to give back everything he has taken from them over the past two years,” State Senate Minority Leader Steven Oroho (R-24) said.

‘It’s Time To Give It Back’

Three days after the launch of “Give It Back,” an online petition in support of the movement has already garnered 3,660  signatures.

Since the onset of the coronavirus crisis in March 2020, Republicans have complained that Murphy has seized too much control, sidelining state lawmakers.

“Governor Murphy has taken so much from New Jerseyans since the start of the pandemic,” Oroho, a fierce critic of the governor, said in a statement. “He’s taken money, he’s taken power, and he’s taken rights, choices, and freedoms from every single New Jerseyan. We’re going to help New Jerseyans send him the message that it’s time to give it back.”

The campaign follows Murphy’s Jan. 11 extension of the public health emergency to fight a surge in COVID-19 cases driven by the omicron variant.

The latest order allows the state to continue COVID-19 vaccine distribution, testing or vaccination requirements in certain settings and collection of virus-related data. It also left mandates in place for masks in schools and daycare facilities.

Republicans opposed the latest renewal, pointing to the continued downward trend in COVID-19 cases. They noted Murphy’s recent orders were made without input from the state Legislature or public. A deal reached with legislative leaders last Summer was to have the powers sunset on the Jan. 11 date.

“Instead, he unilaterally started to rule by executive decree once again,” Oroho said.

Murphy has until Feb. 10 to extend that declaration, which grants him broad authority to act during a public health crisis without needing approval from the state Legislature.

Currently, a state of emergency lasts until the governor lifts it. Under the Emergency Health Powers Act of 2005, New Jersey’s governor can keep issuing renewals of the status every 30 days.

The current state of emergency declaration has been extended monthly since it was initially established on March 9, 2020.

‘An Obscene Amount Of Money’

While the upcoming deadline to renew the public health emergency played a role in the launch of the campaign, Republicans said it wasn’t the only factor.

State Sen. Declan O’Scanlon (R-13) said, “Yes, it has to do with next week, but it also has to do with really, truly an obscene amount of money that the state is holding, or will hold shortly, that’s not in people’s wallets, it’s not in business people’s budgets. We need to give that back.”

After lagging during broad shutdowns during the early part of the pandemic, tax collections later rebounded in New Jersey. As of December, halfway through the state budget year, revenues were up $3.4 billion — about 23.5% — from the same six-month period a year earlier.

The Give it Back campaign comes on the heels of a GOP-sponsored measures to curb the health emergency powers that have previous failed in the Democratic-controlled state Legislature in the last two years.

However, the tide may be changing.

The latest bill, introduced Jan. 31 by O’Scanlon, has the support of at least one Democrat.

Last week, the GOP announced that state Sen. Vin Gopal (D-11) signed on as co-sponsor of the measure, which seeks to limit public health emergencies to 60 days — unless the state legislature explicitly approves an extension.

Gopal said he was backing the bill to make sure the state Legislature is a co-equal branch of the government and maintain “a check and balance of power,” regardless of whether the governor is a Republican or Democrat.

O’Scanlon: No One Should Oppose This Bill

O’Scanlon said he is “proud” of the fact that his bill has bipartisan sponsorship.

“It’s unfathomable to many people that our laws would allow a single person to wield such an astonishing amount of authority with virtually no oversight. Our new legislation is based on our experience over the last two years and addresses the serious concerns expressed by both legislators and the constituents we represent,” said O’Scanlon.

The senator went on to say, “Every single member of the New Jersey Legislature should want to sponsor and support this legislation, which would improve their ability to represent their constituents.”

“The Governor too should support this reasonable policy if he has been honest recently when he publicly said he desires to work in conjunction with the legislature going forward. His support of this bill would simply be keeping that promise,” O’Scanlon said.