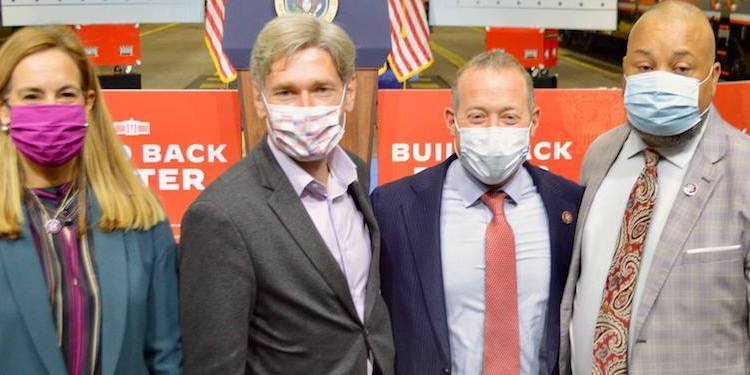 The America COMPETES Act, co-authored by Rep. Tom Malinowski, is aimed to  bolster U.S. supply chains and spur domestic manufacturing of critical goods. Among other provisions, the America COMPETES Act establishes a new Office of Manufacturing Security and Resilience responsible for implementing a $46 billion program to map and monitor supply chain vulnerabilities, provide financial assistance to strengthen supply chains and domestic manufacturing, and equip the private sector with the tools and best practices needed to address supply chain weaknesses before they become full blown crisis.

“I’m delighted that the House has passed the key pillar of the America COMPETES Act that I led alongside (Reps. Lisa Blunt Rochester (D-DE) and Adam Kinzinger (R-IL)) to fix our supply chains, and bring home to America manufacturing of critical goods,” said Malinowski after the bill was passed Feb. 4.

Malinowski highlighted that the bill arose from House Energy and Commerce Committee hearing in October 2021. Four bills formed the basis of the supply chain title in the America COMPETES Act:

“One of the hard lessons we’ve learned during the pandemic is that America should never be dependent on strategic adversaries like China for the goods most critical to our economic and national security,” said Malinowski. “Whether it’s the PPE that protects us from disease, the chips that power our cars and phones, the ingredients needed for vaccines, or the key materials used in electric vehicles and solar panels, we must bring our supply chains home.”

“The pandemic damaged and exposed issues in our nation’s supply chain that are now driving inflation and raising the costs of crucial goods such as groceries, gas, and cars for New Jersey families,” said Sherrill. “I was proud to vote for the America COMPETES Act, which will help strengthen our supply chain and reduce inflation, increase our competitiveness with China, and bolster R&D initiatives that are critical to innovation and GDP growth.”

Among the provisions in the bill promoted by Sherrill include helping critical supply chain sectors like the trucking and warehouse industries hire and train more workers quickly, expanding access to the national apprenticeship system and increase funding for a research initiative developing new long-duration energy storage—bolstering America’s grid resiliency and sustainability to increase energy independence from nations like China.

The bill includes Pascrell’s bipartisan “National Critical Capabilities Defense Act,” which is written to repair America’s frayed supply chains and staunch the bleeding of American industrial might to foreign adversaries. This led provision would create a whole-of-government screening process for outbound investments and the offshoring of critical capacities and supply chains to ensure that the United States can quickly detect supply chain vulnerabilities.

“The Chinese Communist Party government climbed America’s back to economic power. They are abusing that power to commit genocide, crush democratic norms, bully our allies, and undermine workers. Now is the moment where we must stop our adversaries from leaching off America’s economic might to sow discord,” said Pascrell, the Chairman of the House Ways and Means Subcommittee on Oversight.

“I will fight to protect our bipartisan, bicameral bill as Congress begins conference negotiations to hopefully send a final bill to the President quickly.”

According to Gottheimer, amendments he was involved with include requiring a report to Congress detailing links between private sector Chinese technology and social media companies, ensuring the U.S. is coordinating national security-related tech innovation with allied nations like Israel, as a part of a strategy for countering China in the Middle East.

As for domestic initiatives, the Congressman highlighted the bill having STEM-focused career and technical education for veterans looking to transition into the workforce; determine the need for an automated supply-chain tracking application to provide near real-time insight into the critical medical and health supplies available in the Strategic National Stockpile; and set a 30-day chokepoint countdown clock, requiring the U.S. Departments of Commerce and Transportation to report to Congress and the public on major current chokepoints in the U.S.’s supply chain within one month.

“This critical bill includes my provisions to address supply chain chokepoints and stockpile issues, to counteract Chinese money laundering and social media privacy issues, and to support career advancement for our brave veterans, among other critical steps,” said Gottheimer. “It also fully funds the CHIPS Act, which will encourage game-changing investments in semiconductor research, design, and manufacturing here in America.”

Payne added that “America’s economic prosperity depends on our ability to invent the technologies and build the products of the future…American manufacturing created our strong middle class and provided a living wage for millions of American workers and families. But it has been eroding as foreign countries increase their research and manufacturing sectors. We need this bill, and others like it, to regain and retain our position as the number one center for product innovation and development in the world.”

Malinowski argued the “ambitious proposal” will make supply chains more resilient and reduce reliance on adversaries, all while creating good-paying jobs in New Jersey and throughout the country.

“The American supply chain will no doubt experience a major shock again—and whether it’s caused by market or economic forces, a global conflict, a natural disaster, or another public health crisis, we need to be ready,” said the 7th District Congressman. “This bipartisan legislation will help us restock our shelves and bring inflation under control today, while putting America on the strong footing we need to win in the 21st Century.”