State Treasurer Muoio: ‘We have substantially reduced our debt load’ 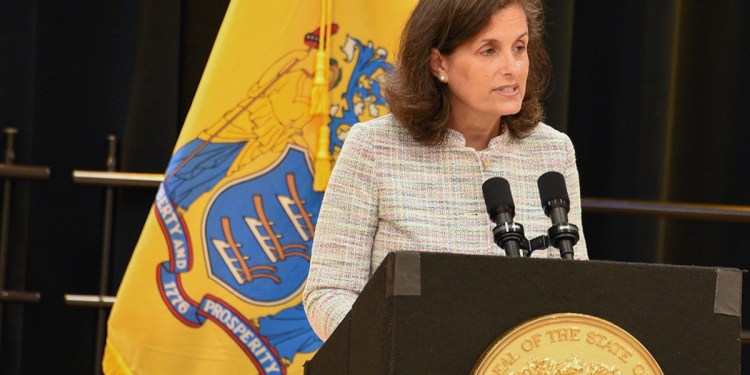 Gov. Phil Murphy touted the development in a press statement as “about making New Jersey more affordable for this generation and beyond. Paying down debt will relieve some of the pressure on taxpayers and free up funding to invest in the things that matter, proving that we can place a premium on fiscal responsibility without sacrificing our values.”

“This was an extremely complex undertaking and our Office of Public Finance, along with the other professionals involved, deserve to be commended for both their diligence and expediency throughout this process,” added and State Treasurer Elizabeth Maher Muoio. “At the end of the day, we have substantially reduced our debt load while securing real savings for the taxpayers of this state.”

The state Department of the Treasury said $2.5 billion was earmarked for retiring existing debt while $1.2 billion has been allocated to support capital construction to avoid taking on new debt.

Murphy has been on defense for months on the issue of borrowing. State Republican lawmakers repeatedly have criticized Murphy for moving too slowly to pay back state debt after taking on debt in their view unnecessarily and burdening taxpayers.

The governor in September 2020 signed into law a budget that included $4.5 billion in borrowing, which now Senate Minority Leader Steve Oroho (R-24) said at the time would burden Garden State taxpayers “for decades into the future.” Murphy argued the $4.5 billion in new debt would help close a revenue shortfall sparked by the coronavirus pandemic.

In April 2021 budget analysts told state lawmakers at budget hearings that the $4.5 billion in borrowing ultimately proved unnecessary, prompting criticism of Murphy and his administration. In the hearings, Muoio defended the borrowing, saying it was carried out amid great economic uncertainty brought on by COVID-19.

And in an April 2021 report, the Office of Public Finance of the State of New Jersey said that the state’s bonded obligations totaled more than $44 billion—a debt total almost as large as the $46.4 billion overall state budget Murphy signed into law in June 2021.

Oroho continued to press for months for Murphy to act on the state’s debt, saying in a November 2021 statement: “It’s extremely disturbing that it’s taken Governor Murphy a year to begin discussing ways to retire debt after his administration admitted it borrowed $4.5 billion unnecessarily last fall without voter approval.”

And on Jan. 27, state State Sen. Mike Testa issued a statement asking: what had happened to Murphy’s promise last year to reduce state debt by $2.5 billion.” Testa said that in financial disclosure documents “filed quietly by the Murphy administration with the financial marketplace last week, the State reported an increase of almost $26 billion in its long-term debt.”

“The Murphy administration’s lack of candor and transparency begs lots of questions about the true state of New Jersey’s finances,” Testa said.

“Treasury’s plan to pay down $3 billion in high-interest debt underscores the importance of the Legislature’s insistence on the establishment of a debt defeasance fund during budget negotiations,” said Sarlo.

“Our focus in crafting the last two budgets has been on affordability and fiscal responsibility, and our ability to pay down $3 billion in high-interest debt will produce more than $600 million in savings for New Jersey taxpayers,” said the Bergen County lawmaker.

“This action follows through on the debt reduction plan we put in place to produce taxpayer savings,” said State Senate President Nick Scutari (D-22). “It’s just like paying off a mortgage or refinancing a mortgage at a lower rate. We’re doing the same thing at the state level and saving large amounts of taxpayer money in the process.

In June, Murphy and Democrats who control the Legislature set aside a “Debt Defeasance and Prevention Fund” $2.5 billion to defease, or retire, existing bond debt. They set aside an additional $1.2 billion for future capital projects.

Treasury’s Feb. 3 press release detailed a lengthy process and said it now has “successfully completed the last in a series of transactions necessary” to retire the debt.

The now-retired bonds had a total debt service cost of $3.107 billion, including principal and interest, over their remaining life.

“When measured against the cost of purchasing the securities, the net savings to the state is $607.2 million over ten years,” Treasury said.

According to World Population Review, a website dedicated to global population data and trends, New Jersey has the second highest amount of debt among the 50 states. New York had the highest debt of the states. Illinois, Massachusetts, and California, ranked third, fourth and fifth highest for debt.