Governor says “no reason” to cancel any parades in 2022 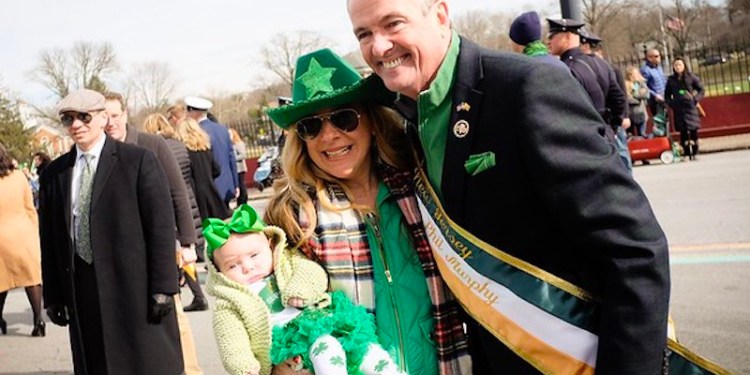 Gov. Phil Murphy, like most politicians, loves a parade.

And he believes municipalities around the Garden State should proceed with them this year, starting with St. Patrick’s Day celebrations next month

“There’s no reason to cancel,” Murphy said when asked about the parades at his weekly press conference Feb. 7 when he announced the school mask mandate would be lifted in March. “We should go ahead—be responsible, be smart particularly when you are indoors.”

But the governor cautioned those heading out for Super Bowl parties this upcoming weekend and any festivities surrounding parades inside should still adhere to health protocols where they can, including holding events outdoors, wearing a mask and social distancing. Throughout the pandemic, the Governor and health officials in his administration have continually noted the virus is more lethal indoors than outdoors.

“I still think you have to use your head, if you’re inside and you’re with a bunch of people … whose vaccination status you don’t know, but there’s no reason whatsoever to cancel them,” Murphy said.

The Newton Fire Department announced on Jan. 20 that it would not hold the Sussex County St. Patrick’s Day Parade in a Facebook posting as “the amount of planning and funding needed to organize this event due to numerous members of our department falling ill to our current pandemic, it has made it rather difficult to hold our meetings and seek funding, while maintaining adequate fire and safety.”

The social media message added that “this event takes weeks of meetings and hours of everyone’s time that wasn’t possible this year. Our main concern is providing Fire Protection and (we) could not risk compromising our membership falling ill from attending meetings for a parade. We hope things will change and improve and that this Parade will get back on track next year if not better than ever.”

The organizers in Atlantic City on Jan. 26 announced the cancellation resulting from a combination of a scaled-down parade route due to boardwalk safety concerns as well as a lack of participant interest “ultimately led to the decision for the 2022 parade cancellation.”

A number of other parades will still take place in North Jersey to celebrate the Irish, including Bayonne, Bergenfield,  Hackettstown, Jersey City, Newark, Morristown, Nutley, Ringwood, Rutherford, and West Orange.

As for those that have passed, the state reported 108 confirmed deaths, bringing that total to 29,157. The state listed probable deaths at 2,937, bringing the overall total to 32,094. State officials noted 29 deaths occurred in the last 24 hours of reporting that have not yet been lab confirmed.

The state’s dashboard had a count of 1,952 patients hospitalized as all 71 hospitals in the Garden State filed reports Feb. 8. By region, there were 744 in the North, 678 in the Central and 530 in the South. Of those hospitalized, 366 are in intensive care units and 262 on ventilators. A total of 159 patients were discharged in the last 24 hour reporting period.

Health officials noted 560 long-term care facilities are currently reporting at least one case of COVID-19, accounting for a total of 26,685 of the cases, broken down between 12,218 residents and 14,467 staff.

The state’s official death total will now be reported as those that are lab confirmed, sits at 9,099 on Feb. 8. The facilities are reporting to the state 8,455 residents deaths and 149 staff deaths.