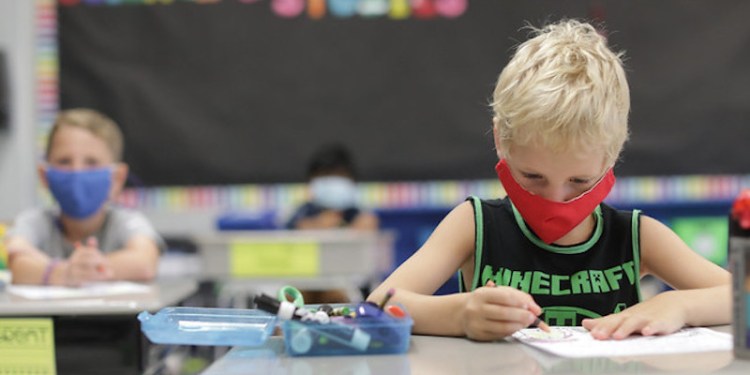 State Republicans believe that Gov. Phil Murphy should have gone further and moved quicker than March 7 when it comes to ending the school mask mandate.

North Jersey GOP lawmakers asserted the ultimate decision should not be made by the government but by parents; the emergency powers the governor has used should end; the governor was picking an arbitrary date based more on politics than science; and was a result of a new State Senate campaign.

“Gov. Murphy has ruled through emergency powers for far too long, and he’s taken away parents’ rights over all of their objections. He should give it all back now,” said State Sen. Anthony M. Bucco (R-25).

The mandate has been effective since the beginning of the 2020-2021 school year, requiring students, staff and visitors to wear a face covering. Murphy in his announcement Feb. 7 said the move and the timeline was being made due to key health metrics continuing to move to better places after a Winter surge.

“Given the continued drop in new cases and hospitalizations, projections indicating a continued decline over the coming weeks, and the continued growth of vaccinations for our school-aged population, we believe that we can responsibly end the universal mask mandate,” said Murphy. “Thankfully, we have reached a point where we feel confident that we can take another step toward normalcy for our kids.”

But the month long delay did not satisfy members of the 40th Legislative District. Assemblyman Christopher DePhillips is questioning why the action can not be done immediately.

“March 7th is an arbitrary date that doesn’t have scientific backing,” said DePhillips (R-40). “Why not end the mandate and all of the issues that go along with it today? What is the rationale behind a one-month delay?”

State Sen. Kristin Corrado (R-40) argued any decision for masking should be made by families and not the government.

“Parents want their rights to make masking decisions for their kids restored today, not next month,” said Corrado. “Gov. Murphy should ‘Give It Back’ now. There’s no excuse to wait any longer.”

Lawmakers further expressed their dismay that Murphy extended the Public Health Emergency another 30 days. The governor said the extension was needed in order to allow the state to continue vaccine distribution, vaccination or testing requirements in certain settings, the collection of COVID-19 data, and other critical components of the state’s COVID-19 response.

It was not an argument that Bucco was buying, stating Murphy has governed through executive action throughout the pandemic.

“By every metric, New Jersey’s COVID numbers have plummeted to the point that overbearing mandates and executive orders are completely unnecessary,” said the Morris County lawmaker. “Gov. Murphy should let the Public Health Emergency expire this week and give back the emergency powers and parental rights he has taken from New Jerseyans. There’s no justification to drag this on for another month while children continue to suffer both educationally and emotionally.”

DePhillips added “The legislature should have more input into decision making, because every legislator is more in tune to the concerns of the districts, teachers, parents and students we represent than any other state official. This never should have been a decision by one person, because in our democracy the legislature is a co-equal branch.”

Assembly members from the 39th, Robert Auth and DeAnne DeFuccio, commented the decision by Murphy is a continuation of a failed mask policy that has “done more harm than good.”

“Gov. Murphy has finally decided to take the muzzle off our children, but he should have never had that type of power in the first place,” said Auth. “His pandemic policies have been illogical and harmful, especially to schoolchildren who have needlessly suffered learning loss and endured mental health struggles.”

DeFuccio was dismayed that the New Jersey Department of Health did not have updated guidance for schools regarding social distancing or quarantining timelines when Murphy made the announcement.

“Details are important to parents, but Gov. Murphy has seemingly left those out …just as he has done to guardians and lawmakers during the state’s entire two-year pandemic response,” said the Assemblywoman. “While I think we can all breathe a collective sigh of relief that our innocent children will return to some sense of normalcy, the governor’s unilateral decisions will continue to have long-lasting consequences.”

State Senate Minority Leader Steven Oroho proclaimed the ending of the school mask mandate marks the first victory for the Give it Back campaign Senate Republicans announced late last week.

“Gov. Murphy will never admit that the pressure is getting to him, but it absolutely is,” said Oroho (R-24). “That’s why he rushed to make this announcement weeks before he actually plans on lifting the school mask mandate. It’s our first ‘Give It Back’ victory.”

The campaign is focused on such issues as taxes, emergency powers, parental rights, vaccine choice, economic freedom, and safe streets Republicans say Murphy has taken from residents that he must give back.

As for those that have passed, the state reported 81 confirmed deaths, bringing that total to 29,323. The state listed probable deaths at 2,937, bringing the overall total to 32,260. State officials noted 26 deaths occurred in the last 24 hours of reporting that have not yet been lab confirmed.

The state’s dashboard had a count of 1,708 patients hospitalized as all 71 hospitals in the Garden State filed reports Feb. 10. By region, there were 673 in the North, 580 in the Central and 455 in the South. Of those hospitalized, 327 are in intensive care units and 212 on ventilators. A total of 264 patients were discharged in the last 24 hour reporting period.

Health officials noted 549 long-term care facilities are currently reporting at least one case of COVID-19, accounting for a total of 26,748 of the cases, broken down between 12,349 residents and 14,399 staff.

The state’s official death total will now be reported as those that are lab confirmed, sits at 9,127 on Feb. 10. The facilities are reporting to the state 8,461 residents deaths and 149 staff deaths.

Ahead of Valentine’s Day, Relationships Return to Pre-pandemic Norm

Ahead of Valentine's Day, Relationships Return to Pre-pandemic Norm