Congressman: ‘We shouldn’t stifle innovation in the cryptocurrency market’ 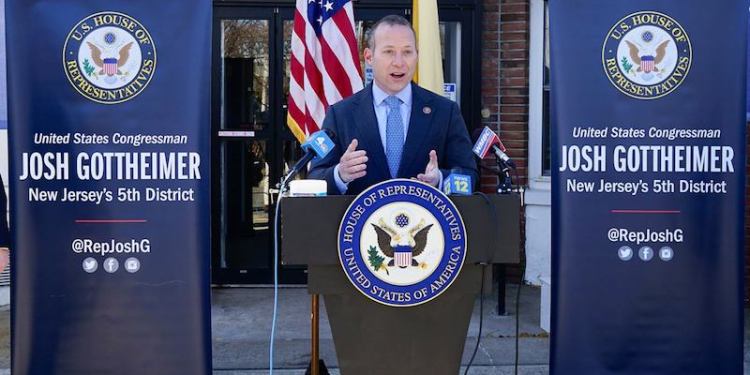 Rep. Josh Gottheimer is pushing for federal legislation to provide “more direction and certainty” to the emerging cryptocurrency marketplace while at the same time protecting consumers and investors.

“We shouldn’t stifle innovation in the cryptocurrency market. We should ensure the proper safeguards are in place, and ensure our nation is a leading force in financial technology,” Gottheimer said in a press statement.

Gottheimer’s legislative proposal, “The Stablecoin Innovation and Protection Act,” would define qualified stablecoins as a cryptocurrency redeemable on demand on a one-to-one basis for U.S. dollars and issued by one of two qualified issuers, either an insured depository institution such as a bank or a non-bank qualified stablecoin issuer, which would be subject to reserve requirements.

Stablecoins are a type of digital asset generally designed to maintain a stable value relative to the U.S. dollar. Gottheimer said his proposal would protect against systemic risk, fraud, and illicit financing.

The North Jersey lawmaker’s draft proposal provides for the federal Department of the Treasury to have primary oversight over both types of stablecoin issuers through Treasury’s Office of the Comptroller of the Currency.

The Federal Deposit Insurance Corporation (FDIC) would be required to create a “Qualified Stablecoin Insurance Fund,” which would manage the insurance of redemption payments of non-bank issuers of qualified stablecoins.

Gottheimer said the expansion of cryptocurrency offers “tremendous potential value” for the U.S. economy but added that legislation was needed “to protect Americans against bad actors like predatory entities and terrorists.”

What’s in the Proposal

Gottheimer’s proposal states that non-bank issuers of stablecoins must maintain at least 100% reserve assets consisting of U.S. dollars, U.S. government-issued securities such as U.S. Treasuries, and other assets deemed appropriate by federal regulators.

Cash collateral must be held in a segregated FDIC-insured account.

The proposal would require Treasury’s Office of the Comptroller of the Currency to write rules addressing issues such as leverage ratios, auditing requirements, anti-money laundering measures, redemption requirements, liability management standards, and interoperability.

A summary of the proposal states that it would not restrict the federal Securities and Exchange Commission (SEC) and the Commodity Futures Trading Commission from examining non-qualified stablecoins and other cryptocurrencies as potentially being securities and derivatives.

Gottheimer’s release of “discussion draft” legislation follows the November 2021 release of a report on stablecoins by the President Joe Biden’s Working Group on Financial Markets, a group that is chaired by the federal Treasury secretary and comprised of financial regulators. The group’s report pointed to gaps in the authority of federal regulators to reduce risks associated with stablecoins.

“Stablecoins that are well-designed and subject to appropriate oversight have the potential to support beneficial payments options. But the absence of appropriate oversight presents risks to users and the broader system,” said Secretary of the Treasury Janet L. Yellen in a statement accompanying the report.

“Current oversight is inconsistent and fragmented, with some stablecoins effectively falling outside the regulatory perimeter,” Yellen added. “Treasury and the agencies involved in this report look forward to working with Members of Congress from both parties on this issue. While Congress considers action, regulators will continue to operate within their mandates to address the risks of these assets.”

Included with Gottheimer’s proposal was a favorable statement from the Blockchain Association, a cryptocurrency industry group.

“We are pleased that Congress is taking a proactive approach by engaging with stakeholders in industry and government as they consider the best path for stablecoin regulation,” Smith said.  “We thank Rep. Gottheimer for his leadership in this area and look forward to continuing to work with him on these issues going forward.”

There appears to be some legislative steam behind proposals to create a regulatory framework around cryptocurrency.

The House Committee on Financial Services held a Feb. 8 hearing on digital assets where a Treasury undersecretary noted that there are no standards regarding the composition of reserve assets used to support the value of stablecoins, “and information made publicly available regarding stablecoin reserve assets is not consistent across stablecoin arrangements in either its content or the frequency of its release.”

On the other side of the U.S. Capitol, Sen. Cynthia Lummis (R-WY) reportedly is drafting legislation on cryptocurrency as well.