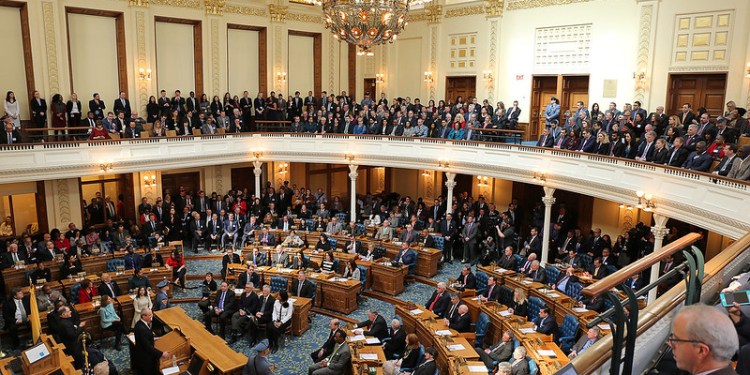 Passage by Democrats allowing the state budget address from Gov. Phil Murphy to be delayed two week drew the ire of Republicans in both the Assembly and State Senate.

Along party line votes in both chambers and signed by the governor on Feb. 14, the deadline for fiscal year 2022-2023 gubernatorial budget message to the state lawmakers was pushed back from the fourth Tuesday in February to March 8 this year.

Republicans said the delay is politically motivated, unnecessarily delays an important process and is just the latest example of Murphy not cooperating with legislators on both sides of the aisle during the coronavirus pandemic.

“Thumbed His Nose at Us”

“He has thumbed his nose at us and has constantly run the state as a one-man band,” commenetd Assemblyman Hal Wirths (R-24), the Assembly Republican budget officer. “When we asked him not to do the public health emergency, he went and instituted it anyway, which kept our kids masked up, put prisoners back on the street, and made workers’ comp claims get paid unnecessarily.”

A leading critic of Murphy, Assemblyman Brian Bergen (R-25) argued that the budget address isn’t ceremonial but starts the process in a very defined timeline.

“The last session, the majority party had the full amount of time between the budget message and the budget deadline and (Democrats) barely got it done,” said Beregn. “Every time this legislative body comes to a crossroads, where you can choose between transparency, good government, open public input, lengthy discussion and debate with the intent of getting to the best possible solution the first time, or opaqueness, backroom deals, and a rushed legislative process, you always make the wrong choice.”

While Murphy asked for the delay to allow key COVID-19 health metrics to decline among other factors, Assemblywoman Nancy Munoz (R-21) disputed that reasoning. Munoz cited an analysis out of Johns Hopkins University that found measures to protect COVID spread made no significant difference and news reports on Murphy’s post-election focus groups to prove his request is based on political science.

“Sadly, Gov. Murphy hasn’t dropped the act. He says it’s data-driven decisions, but we just don’t see it. Pushing the budget address back has nothing to do with science, it’s political science,”  said Munoz, the ranking Republican on the Assembly Budget Committee. “COVID has been used as a cop-out for too long. This bill helps the governor politically, while the actions over the past two years have proven not to help the residents medically.”

The bill moving straight to both chamber’s floors was an issue for Assemblywoman Aura Dunn (R-25). The Morris County lawmaker found the bill being emblematic of a process that saw nearly 30 bills in 2021 passed and signed into law that circumvented the committee process.

“The system is broken. Our process is no longer responsive. If we do not adhere to our processes, we disenfranchise our residents,” said Dunn, sponsor of a constitutional amendment to require every bill to be heard in committee. “(The public has) lost trust in us. I urge all of my colleagues, on this procedural matter, to respect the process and vote no on this extension.”

In the upper chamber, State Senator Declan O’Scanlon (R-13) noted both the Senate and General Assembly have been holding regular in-person sessions safely, so there’s no legitimate public health reason to delay a joint session.

“We believe Gov. Murphy should comply with the law and deliver his Budget Message to the Legislature on time and in person,” said O’Scanlon (R-13), the Senate Republican Budget Officer. “The proposed delay is really about buying time to try and hide $3 billion of overtaxation that everyone knows exists and should be given back to taxpayers. That’s why the Murphy administration is trying to keep his budget plans a secret for as long as possible.”

During a press briefing Feb. 16, Murphy responded that he was confident that that the budget process would not be affected by a two week delay. The governor cited the State of the State address as well as his Inauguration in playing a role for the deferral in the address but noted his administration started the budget process in October.

“I now know enough to be dangerous about other state’s practices, and New Jersey has a really good setup in terms of how they do the budget,” Murphy stated. “You’ve got from March 8th to June 30th to basically conduct all the hearings, to head the discussions, to go out and talk about the budget. So for all those reasons, this is the right, responsible step to take.”

Murphy did confirm wanting to have a large, indoor address was a factor as well as “more time on the clock allows us to have a higher likelihood that we can do it in person.”

As for those that have passed, the state reported 65 confirmed deaths, bringing that total to 29,660. The state listed probable deaths at 2,949, bringing the overall total to 32,609. State officials noted 20 deaths occurred in the last 24 hours of reporting that have not yet been lab confirmed.

The state’s dashboard had a count of 1,232 patients hospitalized as all 71 hospitals in the Garden State filed reports Feb. 17. By region, there were 464 in the North, 416 in the Central and 352 in the South. Of those hospitalized, 201 are in intensive care units and 141 on ventilators. A total of 194 patients were discharged in the last 24 hour reporting period.

Health officials noted 513 long-term care facilities are currently reporting at least one case of COVID-19, accounting for a total of 26,435 of the cases, broken down between 12,206 residents and 14,229 staff.

The state’s official death total will now be reported as those that are lab confirmed, sits at 9,212 on Feb. 17. The facilities are reporting to the state 8,477 residents deaths and 149 staff deaths.