“It seems that Putin is headed towards conflict instead of diplomacy” 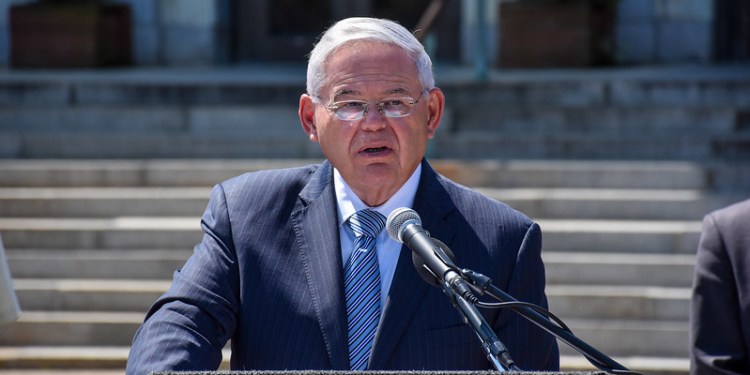 Sen. Bob Menendez sees Russia’s threat of invasion into the Ukraine as one that must be answered by the U.S.

Russian President Vladimir Putin on Feb. 21 delivered an emotional and aggrieved address, laying claim to all of Ukraine as a country “created by Russia,” recognizing the independence of two Russian-backed territories in eastern Ukraine and threatening the government of Ukraine that the bloodshed could continue.

“Vladimir Putin’s illegal recognition of the self-proclaimed Donetsk and Luhansk People’s Republics is an act of unprovoked aggression and a brazen violation of international law,” said Menendez in a press statement Feb. 21. “This illegal recognition is an attack on Ukraine’s sovereignty. To be clear, if any additional Russian troops or proxy forces cross into Donbas, the Biden administration and our European allies must not hesitate in imposing crushing sanctions.”

“There must be tangible, far-reaching and substantial costs for Russia in response to this unjustified act.”

Over the weekend during a recent television appearance, Menendez stated the posturing being demonstrated by the Russian leader “is Putin 101, and unfortunately, I’m getting more and more concerned that the window for diplomacy is being shut by Putin and his moving forward would be a tragic mistake for the Ukrainians but also a tragic mistake for Russia.”

Menendez comments come as diplomacy efforts across the globe continue with the U.S. estimating more than 130,000 Russian troops now stationed near Ukraine’s border.

The Biden Administration responded by saying it would begin imposing limited economic sanctions on the two separatist regions, stopping short of imposing any penalties directly on Russia for now but vowing that more would come. Leaders of the European Union condemned Putin’s move as well, promising to impose sanctions on those involved.

The actions are what led Menendez to express doubt that a resolution will be obtained without armed conflict.

“From all accounts, it seems that Vladimir Putin is headed towards conflict instead of diplomacy,” he said. “Using Ukraine as a battleground to exert the Kremlin’s influence only deepens our resolve to stand with the Ukrainian people so they can finally live in peace, determine their own future, and live in freedom.”

Menendez noted Russia has built a bridge over one of the rivers that is abutting Ukraine while troops are being placed into attack positions.

“So what is happening in the eastern part of Ukraine appears to be another false flag operation where Russian troops … ultimately (creating) an attack against Ukrainians to draw Ukrainians into a conflict and then claim Russia has to respond to it,” said the Chairman of the Senate Foreign Relations Committee.

As the inevitability of a conflict continues to increase, Menendez noted the Majority and Minority Leader of the Senate, joined by the ten Chairs and Ranking Members of the national security Committees, put out a bipartisanship statement of in support of Ukraine’s territorial integrity and sovereignty, assistance both lethal and non-lethal, and committed to crushing sanctions against Russia if it invades.

“The bottom line is we stand ready to support Ukraine. We have been sending lethal defensive weapons,” he said. “The Biden administration has supported it financially with a billion dollar loan guarantee. The administration has coordinated the international community in a way I haven’t seen in some time.”

Menendez added Russia’s president has miscalculated that Europe is seeking to diversify its energy resources instead of depending on Russia.

“NATO now has thousands more troops along the eastern border, which he would have never wanted but has caused because of the threat he’s created to Ukraine,” stated New Jersey’s senior senior. “NATO is stronger today in terms of a commitment to the alliance, and the U.S.-European alliance, the transatlantic alliance, is stronger today as well. I think everything we’ve done works against what [Putin] wanted to see.”

But despite the bipartisanship in backing the Ukraine, Menendez was displeased with a GOP-led sanctions package after weeks of failed negotiations between bipartisan senators. The proposed Republican sanctions package, introduced as the Never Yielding Europe’s Territory (NYET) Act, would “mandate sanctions” on the Nord Stream 2 project without a waiver should Russia invade.

The bill would sanction Putin’s “cronies, enablers and major banks,” and provide $500 million in Foreign Military Financing for Ukraine. Out of the $500 million, $250 million of that would be “emergency funding,” and $100 million would be for “emergency lethal assistance for critical capabilities like air defense, anti-armor and anti-ship capabilities.”

“It’s a shame that Senate Republicans have decided to choose partisan posturing instead of working to reach consensus on a comprehensive bipartisan proposal that would demonstrate a united front to deter Putin from re-invading Ukraine,” commented Menendez. “The latest proposal by Republicans is largely a reflection of what Democrats had already agreed to in our ongoing conversations, building off of the ‘mother of all sanctions’ we initially proposed.”

The Hudson County lawmaker noted a partisan victory only benefits Putin and why he had worked for weeks to convince Republicans to join Dems in legislating something that can deter the Russian leader.

“I will continue pushing for my Republican colleagues to reconsider this path before it’s too late for the people of Ukraine…there is still time to reach bipartisan agreement so the U.S. Congress can help impose the swiftest and harshest of responses for any unprovoked, unjustified actions by Russia,” he said.