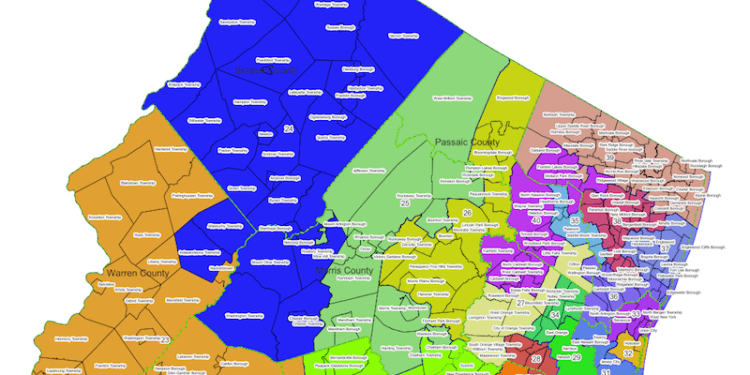 The map passed 9-2 on Feb. 18, with members Tom Kean, Jr. (a Republican) and Cosmo Cirilo (a Democrat) voting no on the 11-member New Jersey Apportionment Commission. The agreement was hammered out with Chairman Philip Carchman serving as a mediator in negotiations between the two parties after each submitted an initial map.

Democrats remain favorites to retain control of the State Senate and Assembly, but Republicans have a shot at gaining more ground in South Jersey. A better but still narrow path to retaking the Statehouse for the first time losing power 20 years ago.The map will take effect with next year’s elections when all 120 seats of the Legislature are up for grabs.

The agreement was historic as it was the first time Democrats and Republicans came to an agreement on a legislative map without the need for a tie-breaking member siding with one party over another. Carchman said both chairs—Democratic State Chairman LeRoy Jones, Jr. and Republican Apportionment Commission Chair Al Barlas—were “strong and fierce advocates for their respective positions.”

While party leaders on the committee were happy with the outcome, current and former Democratic lawmakers expressed unhappiness for a number of reasons.

Most notable was former Senate President Steve Sweeney, replaced on the map-drawing commission last month, who said Democrats on the commission who voted yes “committed nothing short of political malpractice.”

“A decade ago, with Democrats in New Jersey out-numbering Republicans by just over 300,000 people, we were able to construct a map that provided the possibility of 27 Democratic districts,” said Sweeney. “Now, with over one million more Democrats, this Commission is agreeing to a map that will pit four incumbent Democratic senators into two districts. It is now clear to me that I was removed from the committee because it was known I would never allow this to happen.”

The two races that will force incumbent Democratic State Senators to campaign against their long-term colleagues received the most headlines after adoption. The 27th district loses its Morris County portions and instead shifts north, combining Livingston, Millburn, Roseland, and West Orange with Montclair and Clifton from the 34th district.

The change results in Gill and Codey representing the same district to return to Trenton. The 27th district will have Dems represented by two veteran Dem Assemblymen, John McKeon and Thomas P. Giblin.

Codey, a former governor and Senate president, is the longest-serving state lawmaker in New Jersey history, at 48 years. Gill has 28 years in the Senate. Though both have been allies in the past, a primary between Codey and Gill could put the Democratic Party in the position of choosing a White man or a Black woman to back in a primary.

“It is what it is,” Codey said. “I have the utmost respect for (Gill). We have a long way to go before filing.”

Gill noted “In this new district, there are towns I represented before, those I continue to represent, and those I will represent for the first time.”

Sacco has not commented since the map was released on his future, but Stack declared that he would seek re-election in 2023.

”It’s unfortunate that two incumbents were put in the same legislative district when we had an explosions of growth in Hudson County,” said Stack. “Shame on Hudson County for allowing that to happen.

Stack added, “I think with the back room deals that were made in this county to not split Jersey City into three…caused problems.”

Stack was commenting on earlier redistricting proposals to split Jersey City into three districts, keeping representation across most of the county the same. But Jersey City Mayor Steven Fulop among others had raised objections to those plans, sending a letter to the commission voicing his displeasure and questioning the legality.

“This is absurd. … The simple solution is just don’t draw a map that could be illegal. If that was the case there would be no reason for me to have written a letter. Do people really expect me not to speak up if something is going to be counter to Jersey City’s interests? Clearly there was some validity to the points I raised. … this blame game is silly,” responded Fulop .

The new 33rd District is made up of North Bergen, Union City, Guttenberg, Secaucus, Weehawken and West New York. The new map also moves Harrison and East Newark out of a majority-Hudson County district and into the majority-Essex County 29th District. Kearny moves to the 31st District, which includes Bayonne and the southern part of Jersey City.

The previous versions moved only Harrison into the 29th District.

The redistricting has created an opportunity for Assemblyman Raj Mukherji, who wasted no time in announcing his intent to run for Senate in the 32nd district the same day the map was released. Mukherji has already been endorsed by Stack, Fulop, Hoboken Mayor Ravi Bhalla and Gov. Phil Murphy.

Additionally, the new map means that four Hudson County Assemblymembers would have to swap districts, but will technically remain in their old boundaries.

Assemblymembers Pedro Mejia and Angelica Jimenez, Democrats from Secaucus and West New York respectively, would have to move from the 32nd to the 33rd district. On the flipside, Hoboken Democrat Assemblywoman Annette Chaparro would now move from the 33rd to the 32nd district.

The new 33rd District is made up of North Bergen, Union City, Guttenberg, Secaucus, Weehawken and West New York.

Hudson was not the only county that saw Assembly members trading districts. The two Morris legislative districts were substantially redrawn; instead of two east-to-west districts, they will each go north-to-south, flipping the districts of two incumbent GOP assemblymen.

The 40th district, represented by Republicans State Sen. Kristin Corrado and Assemblymen Christopher DePhillips and Kevin Rooney, will pick up Hawthorne in Passaic County, and Essex Fells, Caldwell, North Caldwell and West Caldwell in Essex. The 40th will also add Pompton Lakes in Passaic and Pequannock and Riverdale in Morris.

Allendale, Ho-Ho-Kus, Midland Park, and Waldwick in Bergen County which will now be part of the 39th District represented by State Sen. Holly Schepisi and Assembly Members Robert Auth and DeAnne DeFuccio. The 39th will now be a Bergen only district, no longer having any part of Passaic County.

The 36th district teams of State Sen. Paul Sarlo and Assemblymen Clinton Calabrese and Gary Schaer will add Edgewater and Fairview, which had spent the last decade in the Hudson County-based 32nd district.