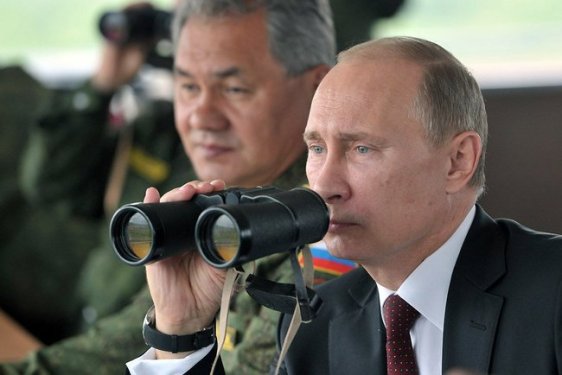 “My heart is heavy for the people of Ukraine. As we pray for them in this dark moment of uncertainty, it is clear that history will prove Vladimir Putin’s decision to sacrifice the lives of countless Ukrainians and Russians was made out of fear—fear of allowing a neighboring independent, sovereign nation to pursue democracy and freedom.

“This unprovoked attack has brought into sharp focus the need to expel the current Kremlin leadership from the international community. Today must mark a historical shift in how the world views and deals with the despot in Moscow.

“The United States and our allies have successfully galvanized an international coalition to counter Russian aggression; now we must refuse to stand by and watch innocent Ukrainian men, women, and children suffer. As Chairman of the Senate Foreign Relations Committee, I am committed to ensuring that the United States upholds our responsibility to exact maximum costs on Putin, the Russian economy, and those who enabled and facilitated this trampling of Ukraine’s sovereignty.

“I welcome the President’s announcement of additional sanctions on Russian banks and oligarchs as well as new tough export controls.

“The sanctions announced today will exact a significant toll on the Russian economy, including by blocking some of the largest banks in Russia; mirroring the steps I have called for in legislation. These measures will also limit Russia’s ability to participate in the global economy, restrict critical exports, and importantly, impose costs on Russian elites who have enabled and benefit from Putin’s aggression and grip on power. These are all critical steps.

“As we seek to impose maximum costs on Putin, there is more that we can and should do. Congress and the Biden administration must not shy away from any options—including sanctioning the Russian Central Bank, removing Russian banks from the SWIFT payment system, crippling Russia’s key industries, sanctioning Putin personally, and taking all steps to deprive Putin and his inner circle of their assets.

“Today’s announcement also shows the power of working in lockstep with our European and Asian allies and partners. The administration’s persistent effort to marshal a unified, international response to Putin’s aggression will make these sanctions hit harder. And they demonstrate that we will continue to act together, as a coalition, to maximize the pain on Putin for causing this war.

“The scenes coming out of Ukraine are heart wrenching. The world must do more to stop the brutality and horror unfolding in Ukraine. We need to do everything possible to support the Ukrainian people and their democratically-elected government. This means providing necessary assistance to support the economy, help the legitimate Ukrainian government continue to operate, and meet any humanitarian needs. We must be relentless in providing the assistance Ukraine needs to counter this threat from Russia.”

“Just five years ago I visited Ukraine to meet with the nation’s leaders to discuss the urgent threats they faced from ongoing Russian aggression. I found a hopeful, resilient people determined to build a free, prosperous nation that is a part of the international community, and I was lifted then as I am now by Ukrainians’ fierce commitment to democratic ideals like liberty and self-determination.

“President Putin’s illegal and unprovoked invasion is putting the lives and livelihoods of millions of people at grave risk. This unjust attack threatens the international rules-based order, which has helped to ensure peace and promote security in Europe. In these dark hours, the United States and our allies will stand with the freedom-loving people of Ukraine who share our most fundamental ideals.

“We will hold Putin and the Kremlin accountable for this outrageous violation of Ukraine’s sovereignty. I strongly support the enactment of broad and severe international sanctions targeting Putin, the Russian economy, and those individuals and entities that are supporting and enabling the Russian military’s invasion. We are united with Ukraine, its people, and our NATO allies in our determination to counter Russia’s aggression and its attack on an independent, democratic nation.”

Russian forces invading Ukraine — a sovereign nation — and launching a war of aggression is horrific. Putin must, and will, be met with strong and united opposition by the U.S. and our democratic allies.

Shutting down Putin’s access to assets in the United States and sanctioning Russia’s major banks are important first steps in responding to Russia’s aggression and invasion of Ukraine. However, we must continue implementing the strongest possible sanctions, including kicking Russia out of SWIFT, the secure global financial messaging system. China, Iran, and dictators around the world are watching how we respond, and we must stand strong with our democratic allies against this horrifying invasion.

Malinowski is a sponsor of a bill to implement full financial freezing sanctions and asset seizures against the so-called Navalny 35 and other enablers of the Putin regime.

“We urge President Biden to immediately impose full freezing sanctions on the so-called Navalny 35 list of Russian oligarchs, crooks, and officials who prop up the Putin regime. Endemic corruption and theft from the Russian people fuels Putin’s repression and military aggression; it is also his greatest political vulnerability. So as leaders of the Congressional Anti-Corruption Caucus, we have supported tough measures to seize the assets corrupt Russian officials hold outside of Russia, and to ensure the United States is not a safe haven for their ill-gotten gains. The time for coordinated action against these enablers of Putin’s abuses is now.

Further, we call on all nations standing against Russia’s invasion of Ukraine to take immediate action to seize the assets of these corrupt officials and kleptocrats. The United States government should use all of its diplomatic resources and legal authorities to ensure that third countries seize the yachts, private jets, beachside villas, and hidden bank accounts of Putin’s cronies. If additional legal authorities are needed to compel action by such countries, the Biden administration should work with Congress to pass the necessary legislation.”

“Putin has once again shown his utter disregard for the sovereignty of the Ukraine. His decision to attack Ukraine is dangerous and will harm many. We must stand with our allies to protect human rights, international law, and the foundations of democracy.”

“President Biden’s new sanctions are decisive leadership and an appropriate action as we stand with the people of Ukraine. Vladimir Putin and his leadership are waging a deadly war against Ukraine and its people. They must feel acute pain for their crimes and the horrors they are causing. Seize their estates. Impound their yachts. Auction their possessions. Topple their stock market. Embargo their fuel. Kick their kids out of our colleges. Vladimir Putin may be one of the richest man on earth with billions he has looted from his people: grab every penny of it that can be grabbed.

“The United States must lead the world community. President Biden’s leadership in working with our European, G7, and NATO allies has allowed for these tough multilateral actions. And our allies must continue to join us in accepting the weight of further measures. Certainly there will be some pain and sacrifice for the greater good of freedom, democracy, and the world community. Banishing Russia from international banking systems like SWIFT is a next step we should support to bring the Putin regime to its knees. If 20th Century history has taught us anything, it is that if you continually sate a wolf, he will not stop but eventually devour you. We must band together with our allies to isolate Russia economically, diplomatically, and financially”

“Vladimir Putin has instigated an unprovoked and unjustifiable attack against Ukraine––a sovereign, democratic nation. He has attempted to rewrite history and has unleashed propaganda and disinformation in pursuit of his clear desire to rebuild the Soviet Union’s so-called sphere of influence. The strikes he authorized last night are unconscionable, and he is directly responsible for the deaths caused.

“I am supportive of the sanctions imposed so far by the US and our allies, but our sanctions must impose more consequences on Putin and his cronies. In addition to freezing monetary assets, we should immediately restrict travel for Oligarchs and their families. We must remove Russian banks from the SWIFT payment system and put into place full blocking sanctions for the Russian Central Bank. We must sanction Putin himself. It is critical to show Putin just how damaging this decision to invade will be to his country and his allies.”

“Vladimir Putin is a thug. He runs a kleptocracy. This is a bad, bad, bad dude who has no right whatsoever deciding about somebody else’s borders.”

“This guy is the enemy. Not the Russian people. This guy and his cronies are the enemy of the United States of America. Let there be no doubt about that.”

“Russia’s invasion of Ukraine marks one of the darkest days in Europe since WWII. We stand with New Jersey’s Ukrainian American community and with (President Biden) in supporting the people of the independent nation of Ukraine.”