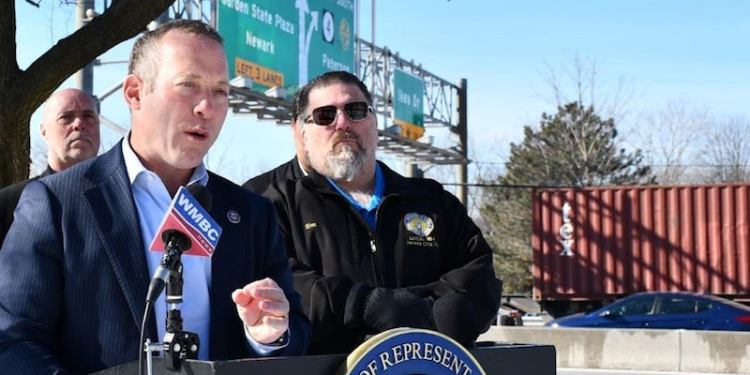 Speaking earlier this month in Paramus near the interchange of Route 4 and Route 17, Gottheimer said the funding would improve roads and bridges, leading to smoother and safety commutes.

Besides better roadways that cause less damage to North Jersey residents cars, the 5th Congressional District Congressman said the investment in infrastructure would help to grow the economy and create construction jobs for the renovations and repair projects.

Gottheimer said the state already prioritized three projects on the 100-year-old Route 17, and that it would help New Jersey residents as they used the roadway.

“Today, we are looking over Route 17, which everyone here knows has its fair share of potholes and pockmarks and other issues that make the commute on this road not the easiest on residents — or on their cars,” he said.

Route 17 is not the only road or railway in need of refurbishing within the Garden State. Gottheimer said more than 3,995 miles of highway were rated in poor condition, and that New Jersey had the third worst roads in the U.S.

Additionally, he highlighted the train tunnel connecting New York and New Jersey, saying it was 110 years old and in need of major repairs despite the fact 20% of the state’s GDP ran through the portal.

The $713 “pothole tax” represents the average each New Jersey driver pays annually for damage to their vehicles, according to Gottheimer. The Representative noted this didn’t account for lost productivity, either.

“That’s a massive extra tax that our residents shouldn’t have to be paying,” he said.

In a separate visit, Gottheimer visited the western side of the district to highlight how the infrastructure bill will help local businesses.

The third-term Democrat showcased Braen Stone’s quarry in Franklin as it one of the  local businesses key to fixing New Jersey roads and highways as part of monies from the infrastructure bill. The Sussex County company produces crushed rock, sand, and gravel — essential raw materials and the main ingredients in concrete and asphalt — critical to building and fixing our roads, highways, bridges, and tunnels.

“This bipartisan legislation will help create new jobs and support local businesses like Braen Stone, improve commutes and safety, and save our families their hard-earned dollars when they aren’t repairing their cars from pothole damage,” said Gottheimer. “The cherry on top: for every $1 we invest in infrastructure, we can create $3 of economic output, which will help our North Jersey communities and businesses grow.”

Gottheimer highlighted the bipartisan nature of the infrastructure package, noting the role he, the Problem Solvers Caucus, on which he serves as co-chair, and a group of Democrats and Republicans from both the House and the Senate, for working together on the bill.

“The Bipartisan Infrastructure Bill, which was signed into law just a few months ago, is the game changer we need,” he said.