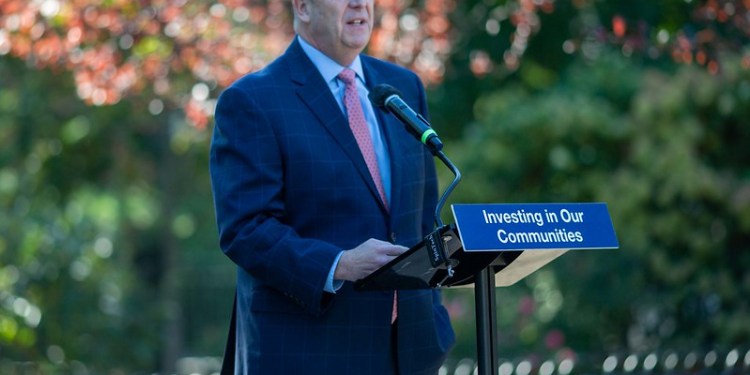 The fight of who would be the State Senator from North Jersey’s newly redrawn 33rd legislative district is over before it ever began.

State Sen. Nicholas Sacco (D-32) broke his silence last week to announce that this would be his last term as a State Senator and would not run in 2023. The North Bergen Mayor said he decided not to run for re-election for the State office several months ago before the new map was adopted by the New Jersey Apportionment Commission after consulting with family and close friends.

“Although I had planned to announce that I will not seek re-election to the State Senate in my own time at a later date, it’s important to send a clear message now that Hudson County Democrats will remain united and to put any speculation about a divisive and unnecessary primary next year to rest,” said Sacco.

The move comes after the new legislative maps were set to pit Sacco against fellow State Senator  Brian Stack (D-33) in a 2023 primary race. The new map shifted North Hudson from the 32nd Legislative District to the 33rd, which in 2024 will now include North Bergen, Union City, Weehawken, Guttenberg, West New York, and Secaucus.

Sacco said he will back Stack’s candidacy for State Senate, saying “can’t think of a better person to represent our community.”

“Brian shares my commitment to public service and making government work for people, and he understands the demands of municipal government and the need for state government to deliver for our residents. I am proud to endorse Brian Stack and look forward to working with him in the years ahead.”

Both State Senators were displeased with the way Hudson County was treated by the Apportionment Commission and state leaders.

“Thanks to Nick Sacco’s selfless decision, Hudson County Democrats have never been more united,” said Stack, who is the Mayor of Union City.

The lawmakers questioned the decision to combine North Bergen and Union City as well as West Hudson towns split up and moved to legislative districts in other counties.

“If anyone thought that they could weaken Hudson County by attempting to divide and conquer us they were sadly mistaken,” said Sacco.

The decision by Sacco eliminates one of the two high-profile races in the State Senate pitting incumbent Democratic State Senators against each other.

State Sens. Richard Codey (D-27) and Nia Gill (D-34) would be vying to represent Essex County’s 27th district and both have stated they plan to run. Codey, a former governor and Senate president, is the longest-serving state lawmaker in New Jersey history, at 48 years. Gill has 28 years in the Senate. Though both have been allies in the past, a primary between Codey and Gill could put the Democratic Party in the position of choosing a White man or a Black woman to back in a primary.

“Nick Sacco is one of the most important leaders in our Democratic Party and I greatly value his experience, his judgment and his friendship,” said Stack. “By making this announcement, Senator Sacco is demonstrating his steadfast dedication to the people of Hudson County and to our Democratic Party. I appreciate his endorsement very much, and I plan to fully support him and his team in their local re-election campaign next year in North Bergen.”

But now the focus in Hudson County turns to the Assembly. Sacco and Stack reportedly reached a deal whereby North Bergen will get to choose one of the General Assembly seats for the new 33rd Legislative District. Currently, the 33rd’s assembly seats are occupied by Pedro Mejia of Secaucus and Angelica Jimenez of West New York. Jimenez is expected to receive the party’s backing, leaving Mejia’s future uncertain.

The redistricting has created an opportunity for Assemblyman Raj Mukherji, who wasted no time in announcing his intent to run for Senate in the 32nd district the same day the map was released. Mukherji has already been endorsed by Stack, Jersey City Mayor Steve Fulop, Hoboken Mayor Ravi Bhalla and Gov. Phil Murphy. Assemblywoman Annette Chaparro would now move from the 33rd to the 32nd district.