Booker: This is a Jackie Robinson moment for our nation 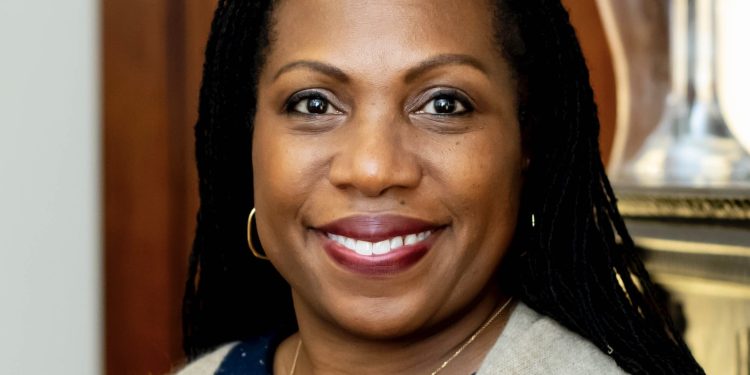 If the Senate approves, the 51-year-old would be the high court’s first former public defender and the current court’s second Black justice — in addition to Justice Clarence Thomas.

Jackson would be the third Black justice in U.S. history (Thurgood Marshall served from 1967-1991) and only the sixth woman to serve on the court. Additionally, Jackson’s confirmation would mean that, for the first time ever, four women would sit together on the nine-member court.

On the day the nomination was announced, , Senate Judiciary Committee Chairman Dick Durbin (D-IL) said the advice-and-consent process will begin “immediately” and vowed the panel would take a “careful, fair and professional approach” what he described as an “extraordinary nominee.”

Sen. Cory Booker, a member of the Senate Judiciary Committee

“I’m deeply grateful to President Biden for conducting a rigorous and thorough process to determine his first Supreme Court nominee. He clearly found the best person for the job.

I’m so impressed with Judge Jackson’s exemplary career, particularly her experience as a public defender—a deeply important role in our justice system that no one who’s ever served on the Supreme Court has experience doing. This kind of occupational diversity is badly needed on our nation’s highest court and helps root Judge Jackson in the reality that the Court’s decisions have on people’s lives—especially those without great wealth and privilege.

This is a Jackie Robinson moment for our nation. For generations America has been blessed with extraordinary legal talent in people of all backgrounds, but for the first time in our history an extraordinarily talented Black woman will serve on the Supreme Court. I’m profoundly moved by this; my heart aches with joy. I’m committed to doing everything possible to make sure that Judge Jackson becomes the next justice on the Supreme Court.”

“Judge Ketanji Brown Jackson would be an excellent addition to the Supreme Court. She is a highly-qualified and thorough justice who will serve on the high court with distinction. Her work as a public defender and service on the U.S. Sentencing Commission gives her an understanding of how the legal process affects Americans and American families. I am proud that President Biden has fulfilled his campaign promise to nominate an African-American woman to the Supreme Court. This is an outstanding selection and I look forward to seeing her as our country’s next Supreme Court Justice.”

“This is an excellent and historic selection by President Biden. Judge Jackson is an outstanding jurist and will bring needed balance to the badly slanted High Court. Her public defender background will be indispensable as we continue to bend the Court back towards justice. The Senate has already confirmed Judge Jackson once and should confirm her now fast.”

“Judge Ketanji Brown Jackson is an eminently qualified jurist with impeccable credentials, profound integrity, and sound judgment. Throughout her career, Judge Jackson has excelled as a practitioner, including as a former assistant federal public defender, and as a federal district court and federal appellate court judge, writing over 500 legal opinions on a myriad of complex issues ranging from constitutional and administrative cases to matters implicating national security and civil rights.

For the first time in history, women and girls across America will see themselves more fully reflected in our judicial system. Since its founding in 1789, only two Black men and only five women have been appointed to serve on our Nation’s highest court. President Biden’s decision to appoint the first Black woman to the Supreme Court is a historic and momentous occasion and also marks the first time that four women will be seated on the high court at the same time. Today’s nomination of Judge Jackson opens up a world of possibilities and opportunities for future generations of Americans.”

“I applaud President Biden for nominating Ketanji Brown Jackson, whose wealth of experience will make her an excellent addition to our country’s highest court. Today is an undeniable win in the fight for greater diversity in our government. With the addition of Jackson, the Supreme Court will be one-step closer to reflecting the rich diversity of the United States.

Representation in our elected and appointed officials matters, and I am proud that in New Jersey we are making progress in our efforts to promote diversity. From the confirmation of Fabiana Pierre-Louis, who made history as the first Black woman to sit on the New Jersey Supreme Court, to the election of the most diverse Assembly Democratic Caucus in history, we have recently gained many new, strong voices that reflect our State’s diversity.”

I will continue to be a champion for diversity, and I hope that Jackson’s nomination to the Supreme Court encourages more people of color and members of the Asian American and Pacific Islander community to pursue inclusion at all levels of government.”

“Congratulations to Ketanji Brown Jackson for being nominated as the next Associate Justice of the United States Supreme Court. This is a historic nomination of an eminently qualified jurist which should move forward with bipartisan support.”