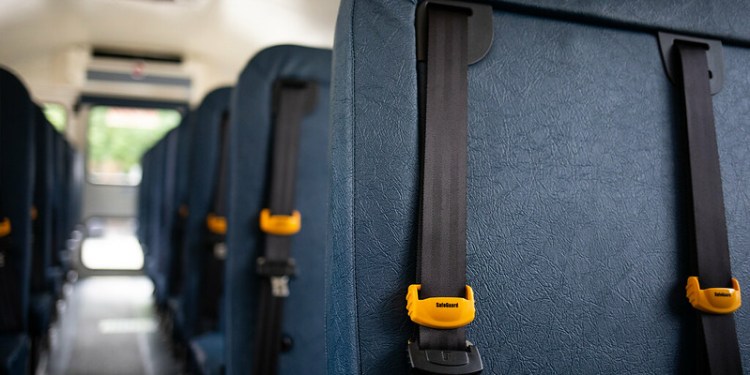 Students getting on New Jersey school buses have the option to not to wear a mask this week.

But Gov. Phil Murphy is urging residents to wait until the school mask mandate ends March 7 when the state lifts the requirement for students and school personnel.

The issue of mask mandates comes after the Centers for Disease Control and Prevention announced new guidelines for health protocols last week, using “community levels” that take into account the total number of cases, hospital admissions and the number of hospital beds available. The three levels now used by CDC are low, medium, and high.

All 21 New Jersey counties currently fall into the low or medium range. Healthy people in these two areas are no longer recommended to wear masks indoors, including in schools. Previously, the agency recommended masks in all schools.

Murphy Administration officials reasoned it did not want to confuse school districts who had just received the state’s new health department guidelines two days prior to the CDC recommendations.

“Many districts and childcare centers are still reviewing the guidance released by the Department of Health earlier this week to determine how they will proceed,” said Murphy Spokeswoman Alyana Alfaro Post in a published report. “Changing the date the mandate is lifted would create challenges for districts and childcare centers that have not yet made a final determination about masking in their schools.”

But that explanation was not good enough for State Sen. Joe Pennacchio.

“The CDC is no longer recommending that masks be worn anywhere in New Jersey under new guidance that takes into account local community data,” said Pennacchio (R-26) in a press statement. “If Governor Murphy were truly basing his COVID-19 policies on science, he would follow the CDC’s recommendation and lift the mask mandate today for New Jersey schools and everywhere else.”

Pennacchio called out “fear-mongering” for those who attempt to make others “never feel safe without a mask regardless of how low the numbers go or what the experts recommend,” citing school districts that will keep local mask mandates in effect until April.

While the Morris County lawmaker recognized that some parents and teachers will continue to have concerns despite the latest guidance, he believes the decision should be made by families.

“While we should respect the personal decisions of those who want to continue masking, their fears shouldn’t be forced upon everyone else, especially our children,” he said.

The cumulative number of confirmed coronavirus cases in New Jersey as of March 1 was 1,873,522 with 873 total new PCR cases. There were 268 probable cases, bringing the cumulative total of antigen tests to 295,109. The total number of individual cases for the state is 2,168,631.

As for those that have passed, the state reported 41 confirmed deaths, bringing that total to 29,983. The state listed probable deaths at 2,968, bringing the overall total to 32,951. State officials noted seven deaths occurred in the last 24 hours of reporting that have not yet been lab confirmed.

The state’s dashboard had a count of 777 patients hospitalized as all of the 71 hospitals in the Garden State filed reports March 1. By region, there were 267 in the North, 259 in the Central and 251 in the South. Of those hospitalized, 132 are in intensive care units and 89 on ventilators. A total of 77 patients were discharged in the last 24 hour reporting period.

Health officials noted 404 long-term care facilities are currently reporting at least one case of COVID-19, accounting for a total of 22,467 of the cases, broken down between 10,537 residents and 11,930 staff.

The state’s official death total will now be reported as those that are lab confirmed, sits at 9,278 on March 11. The facilities are reporting to the state 8,495 residents deaths and 149 staff deaths.

In regards to outbreaks related to in-school transmissions as of Feb. 22, the state has tracked 507 school outbreaks and 3,450 cases linked to those outbreaks since the 2021/2022 school year starting Aug. 7, up four outbreaks and 17 cases from the week previous.