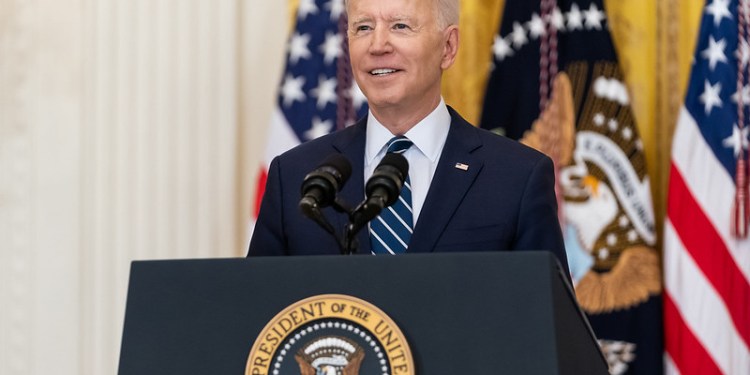 President Joe Biden assured the American people that “freedom would always triumph over tyranny” during the first State of the Union address of his presidency March 1.

In a speech that just a week ago was expected to be focused on the economy after a Winter COVID-19 surge, President Biden began his address noting the U.S. role on the world stage as the Russian invasion ordered by President Vladimir Putin of Ukraine begins its second week.

“Putin’s war was premeditated and unprovoked. He rejected efforts at diplomacy. He thought the West and NATO wouldn’t respond. And, he thought he could divide us here at home,” said Biden in his hour long speech. “Putin was wrong. We were ready.”

The President called on members of Congress to move a package of arms and humanitarian aid for Ukraine. And he told those watching at home to  brace themselves for economic hardships resulting from the conflict.

“Throughout our history we’ve learned this lesson — when dictators do not pay a price for their aggression, they cause more chaos,” the 46th President of the United States said. “They keep moving. And the costs and threats to America and the world keep rising. A Russian dictator taking action has a cost around the world.”

In a bid to ease those hardships, the U.S. and its allies will release 60 million gallons of gasoline from the strategic reserve to combat soaring gas prices. Among the new sanctions announced was the banning Russian aircraft from flying through American airspace as he promised to hold Russian oligarchs accountable.

“This is a real test and it is going to take time…(but) we are going to be ok,“ stated Biden. “When this is over, the rest of the work will be stronger and Russia will be weaker.”

The rest of the address centered on domestic issues, a mix of accomplishments and work still to be done.

Biden conceded that Americans are continuing to be hurting while highlighting the victories of his administration since taking office just over a year ago to the congressional joint session. He contrasted his most notable legislative achievement with that of Republicans under Donald Trump.

“Unlike the $2 trillion tax cut passed in the previous administration that benefited the top 1% of Americans, the American Rescue Plan helped working people — and left no one behind,” stated Biden.

The President thanked Republicans for their support in passing the Bipartisan Infrastructure Bill, Despite his setbacks on his legislative priorities from last year, Biden highlighted his success in passing a $1 trillion plan with Republican support to rebuild and expand the nation’s highways, bridges, airports, rail, internet broadband and other infrastructure.

On the domestic front, the president pledged to reinvest to make sure jobs return to the U.S. that have been done overseas in countries like China.

With his poll numbers declining due to concerns about inflation, Biden talked about the economy’s progress under his watch, especially job gains. He again pushed elements of his Build Back Better Act stalled in the Senate, including lowering prescription drug prices, climate change initiatives that will cut energy costs, childcare costs, and affordable housing.

Rodriguez was highlighted before the speech as being a beneficiary of the childcare funding initiative of the American Rescue Plan. Rodriguez enrolled her children in Bergen’s tuition-free child care program available from the federal program. The North Jersey resident is a first-generation American and the daughter of parents from Brazil and is on track to graduate Bergen with an associate’s degree in general science and aims to transfer to a four-year institution for a bachelor’s degree in nursing.

Biden stated he has “a better plan to fight inflation” compared with those he sees as driving down wages and making Americans poorer. He will urge U.S. companies to lower their costs, return manufacturing of such things as cars and semiconductors to America and focus on the need for more competition in certain industries as well as his decision to use the federal government’s antitrust authorities to help tame soaring prices.

“I am a capitalist. But capitalism without competition is exploitation,” said Biden, who announced a crackdown on foreign shipping companies that overcharged businesses during the pandemic. “My plan to fight inflation will lower your costs and lower the deficit.”

The Democrat argued that spending more on infrastructure will increase innovation in America as well, resulting in more goods moving faster and cheaper in the U.S.

“More jobs where you can earn a good living in America. And, instead of relying on foreign supply chains — let’s make it in America,” said Biden. “Economists call it ‘increasing the productive capacity of our economy.’ I call it building a better America.”

He again reiterated that anyone earning under $400,000 would not see their taxes rise and asked “let’s make wealthy Americans and corporations pay their fair share. Let’s get this done, we know we all have to make changes.

The address in front of House and Senate members was held without a mask mandate, as the rate of transmission and new cases continues to decline in the U.S. The President detailed the progress in combating COVID, noting three-quarters of the population is partially or fully vaccinating while cautioning that future variants could still threaten Americans.

“We reached a new moment in the fight against COVID-19,” said Biden. “I say we will never just live with COVID-19, we will combat the virus.”

Biden’s plan includes continued vaccinations and treatments, be prepared for new variants that endures a national stockpile, returning the workforce back to office buildings, including federal employees, and continue to support global vaccination efforts.

He sought to end the bitter divide that the pandemic has caused the nation, saying “Let’s stop seeing each other as enemies and instead as fellow Americans.”

Biden then focused on his attempt to fight crime as rates have risen in the last couple of years. He promoted efforts of community policing, while ensuring that police departments and their officers are supported.

“The answer is not to defund the police, it is to fund the police,” said Biden. The president pledged to tackle both immigration and border security as well, which drew the largest ovation of the night from GOP congress members.

Biden noted that he signed 80 bipartisan bills into law last year. He cited four areas that lawmakers could come together with where they have common goals—the opioid epidemic; mental health including holding social media company’s accountable for targeting children; improving support and care for veterans affected by burn pits; and increased funding to “end cancer as we know it.”

State of the Union

The President ended his speech with a fiery declaration that he is more optimistic about America than he has been in his whole life.

“The state of the union is strong because you, the American people, are strong,” said Biden. “We are stronger today than we were a year ago. And we will be stronger a year from now than we are today. Now is our moment to meet and overcome the challenges of our time. And we will, as one people.”