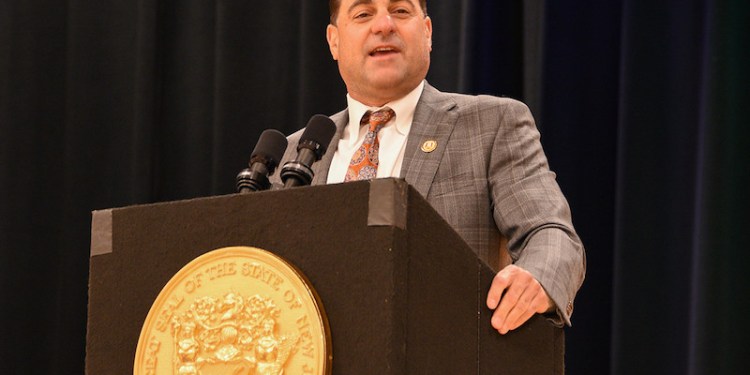 An influential Bergen County lawmaker is leading the charge for New Jersey to divest from Russia.

“We need to target Russia’s economic pressure points to make them pay a price for launching a war of aggression against a free people and the democratically-elected government of Ukraine,” said Sarlo, the committee’s chair. “The Russian playbook is to shift investments around to try to hide them from accountability.”

“New Jersey and other states can help cut off these financial maneuvers with restrictions that will reinforce international sanctions. Other states should join with us in a unified stance in support of the Ukrainian people.”

The legislation is in response to Russian President Vladimir Putin ordering the invasion of neighboring Ukraine on Feb. 21. The U.S. and its allies have imposed a suite of severe sanctions on Russia in recent weeks in a unified effort to keep economic pressure on the Kremlin. The U.S., alongside the U.K. and the European Union, have issued sanctions against Putin and Russian Foreign Minister Sergey Lavrov. Sanctions have continued in the days since the invasion

The bill, S-1889, would prohibit the state and local government in New Jersey from doing business with the Russian government or any business or financial institution with Russian interests. The bill would specifically prevent the state from investing pension or annuity funds in companies engaging in financial activities in Russia, and would prohibit the state from banking with institutions that provide banking services for Russia.

“It’s clear that Vladimir Putin has little fear that the people of his nation will learn the truth of the atrocities being committed under his command in Ukraine when they only have access to censored media that spews lies and fake news,” said O’Scanlon.

The GOP lawmaker added that “while Putin might be able to control the flow of information within Russia, but he won’t be able to shield his nation from the economic impact of sanctions and divestment undertaken by governments across the world, including the State of New Jersey.”

Under the bill, a person or entity that engages in investment activity in Russia would be prohibited from obtaining a professional service contract from the state or a local government, a tax credit or other economic incentive issued by the Economic Development Authority, a tax abatement, or a payment in-lieu of property tax agreement. The bill would apply to Belarus as well as Russia. It was.

“These unified actions are not intended to hurt peaceful Russian citizens, but to send a strong message to the oligarchs and others in positions of power that their leader has crossed a line with his war in Ukraine that the international community will not tolerate,” said O’Scanlon.