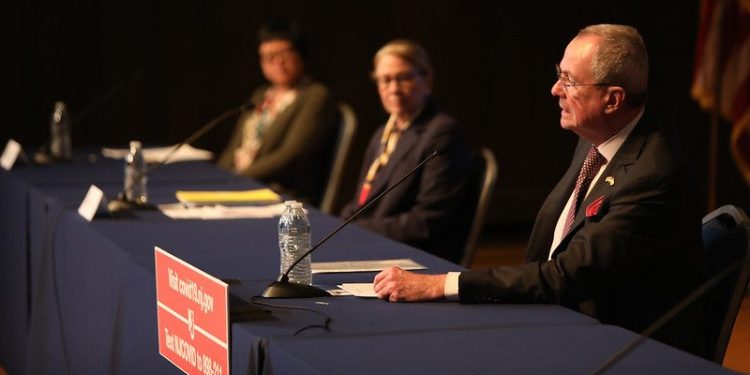 The decision to end the public health emergency by Murphy was announced on the two year anniversary of the first case discovered in New Jersey and the last of the weekly scheduled press briefings, the 257th in total.

“Like today’s briefing, this action marks the end of this phase in our war against the coronavirus as we make the transition from pandemic to endemic,” Murphy said. “Because we are committed to continuing our efforts to vaccinate, test, and coordinate the health care system’s response, this order will continue existing orders, directives, and waivers related to those areas.”

The governor said the general state of emergency declared March 9, 2020 will stay in place. He noted this is not unprecedented as the one that then Gov. Chris Christie enacted for Superstorm Sandy is still in effect to this day.

“This authority allows us to receive and distribute federal funding without any unnecessary red tape or bureaucratic obstacles…maintaining this one will not impact your daily life,” said Murphy. “But make no mistake, given the enormous progress we have made, the time when large-scale mitigation measures were necessary has passed, and hopefully will never return.”

Murphy pointed out that the public health emergency order was being lifted due to the work New Jerseyans took “to protect yourselves, your families, and your communities. We’ve persevered and fought.” When questioned, Murphy expected the indoor mask mandate in government buildings to end “sooner rather than later.”

“With all we have done to ensure the preparedness of our healthcare system and with the advent of both the vaccines and treatments, we are ready to move forward and to not live our lives in fear,” he said. “We have asked so much of each and every New Jerseyan for the past two years. You have overwhelmingly delivered and then some.”

Murphy, who eulogized 646 New Jerseyans during the press briefings, was emotional in noting those that passed before asking for a moment of silence.

“We honor them still. We honor each and every single one of the more than 30,000 lives we have lost,” said Murphy. “I would love to say that this is over and has come to an end….its not. We think we can responsibly live a normal life with COVID. But an endemic means it remains in our midst.”

The numbers for the final update include a total of 30,031 conformed COVID deaths and  2,968 probable deaths. More than 2.1 million have tested positive for the virus. Hospitals, overrun in the early days of the pandemic, currently have just over 700 hospitalized in the state’s 71 hospitals, with 124 in the ICU and 82 on ventilators. The rate of transmission sits at 0.77 for a second day in a row.

New Jersey Department of Health Commissioner Judith Persichilli listed the challenges during the pandemic and lauded the frontline healthcare workers and a vaccination program she said is one of the best in the nation. The commissioner continued to push for those who are not fully vaccinated to do so.

“The challenge to us is to discover the new normal,” said Persichilli. “It is likely that we will have surges and we must be able to adjust when that happens.”

Murphy added, “Be safe, be smart, enjoy the upcoming spring and warmer weather, enjoy getting together with family and friends, and one last time: don’t be a knucklehead.”

The cumulative number of confirmed coronavirus cases in New Jersey as of March 4 was 1,876,729 with 1,153 total new PCR cases. There were 324 probable cases, bringing the cumulative total of antigen tests to 296,042. The total number of individual cases for the state is 2,172,771.

As for those that have passed, the state reported 17 confirmed deaths, bringing that total to 30,031. The state listed probable deaths at 2,968, bringing the overall total to 32,999. State officials noted eight deaths occurred in the last 24 hours of reporting that have not yet been lab confirmed.

The state’s dashboard had a count of 708 patients hospitalized as all but one of the 71 hospitals in the Garden State filed reports March 4. By region, there were 257 in the North, 245 in the Central and 206 in the South. Of those hospitalized, 124 are in intensive care units and 82 on ventilators. A total of 124 patients were discharged in the last 24 hour reporting period.

Health officials noted 355 long-term care facilities are currently reporting at least one case of COVID-19, accounting for a total of 19,722 of the cases, broken down between 9,187 residents and 10,535 staff.

The state’s official death total will now be reported as those that are lab confirmed, sits at 9,301 on March 4. The facilities are reporting to the state 8,502 residents deaths and 149 staff deaths.