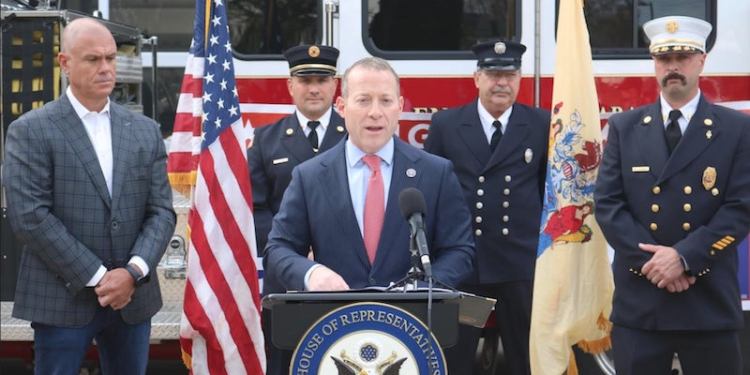 U.S. Rep. Josh Gottheimer is leading a bipartisan push to ban U.S. imports of Russian energy in response to the country’s unprovoked attack on Ukraine.

In a statement, Gottheimer said, “I’m proud to join forces — both across the aisle and across chambers — to help lead this critical bipartisan bill to ban Russian oil and petroleum from being imported to the United States.”

What The Bill Calls For

“We have the opportunity to cut off Putin’s largest revenue source, to support America’s own energy independence and security, and to work with our allies to stabilize the global energy market to help us mitigate rising energy costs for our hardworking families,” said the North Jersey lawmaker.

Among the action the proposed legislations calls for are:

Lawmakers noted that, despite the U.S. having “some of the largest reserves domestically,” it continues to import Russian energy, which “puts American national security at risk and supports Vladimir Putin’s ability to stay in power.”

Fitzpatrick said, “We must put an end to the importation of Russian energy products now. Our bipartisan Ban Russian Energy Imports Act will send Putin and his cronies a clear message: the U.S. will secure our own energy independence, and we will not partake in Russia’s energy manipulation tactics.”

Besides strengthening U.S. energy security, Manchin said the bill also “shows our strong commitment to stand behind the valiant efforts of the Ukrainian people and the measures our allies in Europe are taking to rebuke Putin and his continued aggression.”

Amid the escalating war in Ukraine, Canada and the U.K. have taken aim at Russia’s massive energy sector, announcing restrictions on oil deliveries from the country. Several European countries are also considering similar actions.

While President Joe Biden has imposed sanctions against Russia, targeting Putin, his allies and the nation’s banking system, the White House has been reluctant to curb Russian oil shipments to the U.S. over concerns it would cause inflation and already-high gas prices to skyrocket.

For now, the administration says it is considering a range of options.

On Friday, White House press secretary Jen Psaki said, “There isn’t a strategic interest in reducing global oil supply because that will increase the price of barrels of oil and increase gas prices. We are looking at ways to reduce the import of Russian oil while also making sure that we are maintaining the global supply needs that are out there.”

“I don’t have anything to predict in terms of what that will look like.  And we, of course, remain engaged with — with our friends in Congress,” she said.

The sanctions on the federal level follows move by lawmakers in Trenton.

A bipartisan bill sponsored by State Sen. Paul Sarlo (D-36) was passed by the State Senate Budget Committee Feb. 28 unanimously to prohibit public investments with Russia. The bill, S-1889, would prohibit the state and local government in New Jersey from doing business with the Russian government or any business or financial institution with Russian interests.

“We need to target Russia’s economic pressure points to make them pay a price for launching a war of aggression against a free people and the democratically-elected government of Ukraine,” said Sarlo, the committee’s chair. “The Russian playbook is to shift investments around to try to hide them from accountability.”

That was followed by the state of New Jersey moving forward with economic sanctions on Russia. Gov. Phil Murphy signed an executive order March 2 requiring all state agencies to review their authority to suspend or revoke licenses, permits, registrations, and certifications of businesses that invest directly in companies owned or controlled by the government of Russia and Belarus.

OPINION: Restating Our Commitment in Year 3