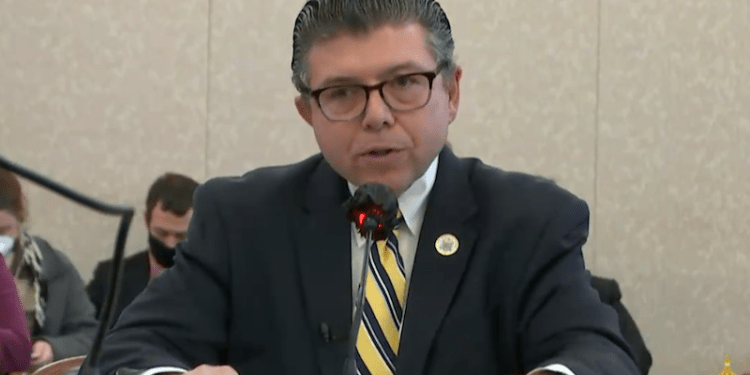 “Our bill will protect New Jerseyans from paying higher income taxes due to inflation and provide tax relief to the many New Jerseyans who live paycheck to paycheck,” said State Sen. Anthony Bucco (R-25). Bucco and State Sen. Steve Oroho (R-24) are the bill’s primary sponsors. Sen. Paul Sarlo (D-36), the committee’s chairman, is a co-sponsor of the bipartisan measure. The committee approved the measure (S 676), 9-0, with three members abstaining.

Bucco and Oroho said their legislation responds to increases in the inflation rate. U.S. inflation rose to a 7.5% annual rate in January, a four-decade high.

“Soaring inflation is making everything more expensive for New Jerseyans,” Oroho said in advocating for the bill.

The bill, Bucco said prior to the budget panel’s vote on it, seeks to prevent bracket creep, which happens “when a person gets a cost of living raise in their salary and that raise pushes them into the next tax bracket where they pay more, but yet inflation is giving them less buying power.”

Federal income tax brackets already are indexed annually for inflation and have been for more than 40 years, Bucco said in his testimony before the Budget and Appropriations Committee.

Bucco acknowledged concern from some Trenton lawmakers over the bill’s potential fiscal impact.

The state’s nonpartisan Office of Legislative Services projected that the legislation may reduce New Jersey’s Gross Income Tax revenues by $150 million to $440 million in the first full fiscal year in which it is effective—revenue that would go to the state’s Property Tax Relief Fund.

“The impact is in fact very small, and we know, year after year, income tax revenue continues to increase and we also know that by giving our residents some hope and a little bit more money in their pocket, perhaps they’ll stay here and continue to pay income taxes on into the future which will offset the small impact that this will provide,” Bucco told the panel.

The Senate Budget and Appropriations Committee heard testimony both praising the bill and requesting that it be tabled so that its provisions could be studied further.

“Overall, this makes our state more affordable….This is a small place where we can start making our tax brackets more affordable especially for the working families that we see leaving the state,” Christopher Emigholz, vice-president of government affairs for the New Jersey Business & Industry Association, told the committee.

Emigholz said that the bill is distinct from many tax policy proposals because it brings together fiscal conservatives who support cutting taxes and fiscal progressives who favor focusing relief on lower-income taxpayers.

“This proposal would drain up to half a billion dollars of funding for public services, which leads to layoffs and brutal cuts,” she said. “With no other way to raise revenue, for instance, municipalities would be forced to increase fines and fees. These are the kinds of changes that are always regressive—right?—falling most heavily on low-income residents who are disproportionately people of color.”

“Address the invisible tax hike more robustly by actually indexing for inflation other features of the income tax code designed to benefit low-paid New Jerseyans—the personal exemption and the standard deduction, both of which can decline in value as well if left unadjusted,” Reynertson said.

At least nine of the 32 states with graduated rate income taxes adjust all three of these features, she testified.

Sarlo: ‘Not Sure’ Where Murphy Admin Stands

Reynertson’s suggestions prompted interest from State Sen. Declan O’Scanlon (R-13), who suggested an immediate amendment to tie both the personal exemption and the standard tax deduction to inflation.

But Sarlo rejected this approach, saying that while he supported both ideas, he feared turning the measure into “an omnibus bill” and would rather pursue both ideas in separate legislation.

“I’m not sure where the [Murphy] administration stands on this,” Sarlo added.

O’Scanlon responded: “We’ll have a draft in front of you at the next meeting.”

‘Give It Back’ GOP Messaging

Both Bucco and Oroho tied their proposal into the state Republicans’ “Give It Back” messaging. The two North Jersey Republicans noted that state revenue collections are tracking $3 billion to $4 billion higher than projected for the current fiscal year, and Gov. Murphy and state lawmakers have an opportunity to return the money to state residents.

“Workers shouldn’t get slammed by higher tax rates when they get cost-of-living allowances that are meant to cover those higher costs, especially when the Murphy administration has billions in the bank. We should give it back and provide real tax relief to New Jerseyans,” Oroho said.

Bucco said of the bill: “I hope that we can get it through the Assembly and onto the governor’s desk.”