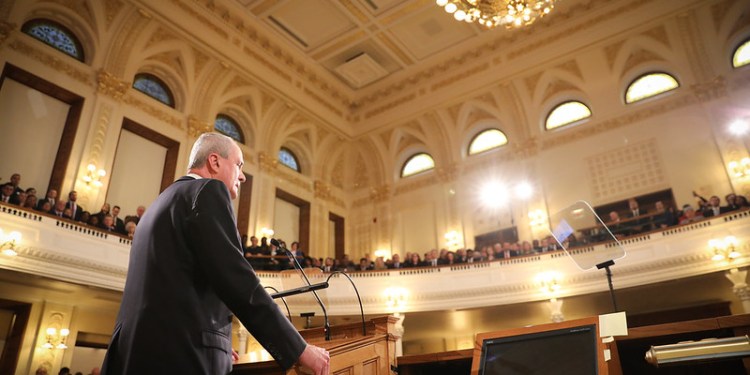 Delivered before a full statehouse for the first time in 743 days, Gov. Phil Murphy outlined his priorities for Fiscal Year 2023 in a budget address March 8.

Murphy presented a $48.9 billion proposed spending plan he said continues the work of the past four years to restore fiscal responsibility, supporting continued economic growth and making New Jersey stronger, fairer, and more affordable for families and seniors of the state.

“A budget is not an end in and of itself. It’s a tool to achieving an end. And this budget is built to help us make New Jersey a true State of Opportunity for all willing to roll up their sleeves and work alongside us,” he stated. “I made a promise that I would not raise taxes this year. This budget keeps this promise. But, even more, it delivers a promise of real and substantive direct property tax relief.”

Murphy started his address by again expressing support for Ukraine and calling for an end to the “unprovoked and desperate aggression of the Putin regime against the free people of Ukraine.”

“Our administration is assessing what financial or business exposure we may have to the Russian government or Russian-owned business interests or securities—including in our pension funds,” said Murphy. “And let me make it perfectly clear—we will take whatever actions are needed to ensure New Jersey taxpayer dollars are not supporting Putin’s unlawful invasion of Ukraine.”

Getting Back to Normal

Murphy acknowledged that it was the first time in over two years since he addressed a joint session of Assembly and State Senators due to the coronavirus pandemic and the day after a school mask mandate and the statewide public health emergency was lifted.

“This was the right step, taken at the right time. It has been, without any doubt, a long and hard two years,” said Murphy. “Today we are back in this Chamber. But more importantly, New Jersey is getting back to normal.”

Murphy said his budget is rooted in a renewed commitment to moving the state forward, creating opportunity for every family, and making the state more affordable.

“I also pledged that I would not raise taxes. And I am proud to keep that promise,” sid Murphy. “Moreover, this budget directly takes on the most stubborn affordability challenge that has faced our state for decades— property taxes.”

Rolled out last week, the governor promoted the ANCHOR Property Tax Relief Program to deliver direct property tax relief to nearly 1.8 million middle and working-class and senior households, whether they are homeowners or renters. It represents nearly $900 million this upcoming year alone in real help for New Jersey families.

“All of this goes to the heart of the meaning of affordability,” he stated. “To some, affordability means cutting the budget just so they can say they cut the budget—even if the end result is simply doing nothing at all to actually make life more affordable for our middle class, those working hard to get there, or our seniors.”

“We have always understood that opportunity and affordability are linked. Lowering costs and cutting taxes—the taxes that hit the middle class the hardest—is but one part of the equation.”

Murphy trumpeted that during his first term, taxes for the middle-class and seniors were cut 14 times, while assuring large corporations or those at the very top were paying their fair share. He proclaimed that as a result, the state was able to support public schools, meet the full annual pension obligation and create programs that “support the dreams of the middle class.”

“And—because facts matter—New Jersey has more millionaires today than ever before,” he added. “Because we did, we have been able to provide more relief and better opportunities for everyone else. We have…worked to make it easier for New Jerseyans to find more affordable places to call home.”

Among the proposals from Murphy are:

Murphy argued that the programs and budget he was proposing would not have been possible without the impacts of the past four budgets in firming up the state’s fiscal foundation that included meeting its  obligations and prudently investing in its future.

The governor noted that the state’s economy is growing, rising to fourth in the nation compared to 47th in the nine years before he took office.

“This is what happens when you focus on building an economy that works from the middle out and the bottom up instead of throwing everything at the top in the hopes that something will trickle down to those below,” said Murphy. “Not only have the ‘job-creators’ stayed, more and more of them are moving in. They’re coming here because our investments are deepening our state’s pool of talented and skilled workers. They’re coming in because our investments are focused on creating the communities in which their own employees want to live.”

He said one of the hallmark promises he made to the people of New Jersey when he first sought this office was to restore the state’s reputation for fiscal integrity.

“Last week, we received direct proof that the financial course we are following is the right one, with the news that Moody’s upgraded our credit rating,” said Murphy. “If you can’t remember the last time we got a Moody’s upgrade it might be because you hadn’t been born yet. Moody’s has only upgraded New Jersey once before. In 1977.”

Murphy’s budget address throughout kept circling back about make the state more affordable for those that live and work in the Garden State. It was the central platform for GOP nominee Jack Ciattarelli in the 2021 election and one that Republicans have continued with as the new legislative session has begun.

The governor framed the issue  as “when we talk about affordability and opportunity, what we are really talking about is empowering people. We’re talking about giving people more choices and more options— and, ultimately, more control over their lives and futures.”

“For whom are we making New Jersey more affordable? Who needs more opportunity? Who needs obstacles knocked down? To me, and in this budget, the answer is clear. It’s everyone looking for their opportunity to live their American Dream, whatever that dream is,” he stated.

The governor defined this group as hardworking families who simply want to catch a break, young people starting out looking for a rewarding career, seniors retiring in dignity and security as well as small business owners and entrepreneurs looking to make their ideas take flight.

Murphy’s speech, just over an hour, is the first step in a months-long budget process. The Legislature will introduce their own bills in the following months and negotiate with the administration over the final budget. Murphy has until July 1 to sign the budget into law.