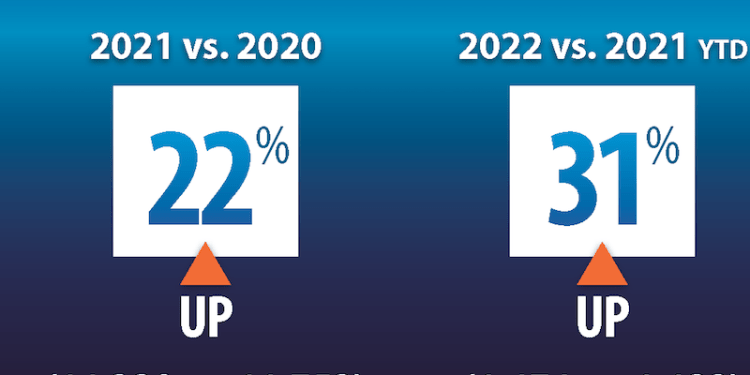 In addition, Platkin is making available up to $125,000 in federal Justice Assistance Grant (JAG) funds to bolster resources and capabilities for the Task Force, including law enforcement personnel and equipment purchases. Through increased overtime reimbursements for assigned law enforcement members, the Task Force will be able to expand its scope and coverage.

“Motor vehicle theft is a growing public safety issue that can lead to dangerous and even deadly confrontations between thieves and their victims, bystanders, or law enforcement officers,” said Platkin. “Expanding the Auto Theft Task Force demonstrates our commitment to reversing this trend while advancing our goal of apprehending criminals, recovering vehicles, and preventing violent crime.

In 2021, there were a total of 14,320 vehicles reported stolen in New Jersey, a 22% increase in overall thefts compared to the year before. In addition, State Police analysis reveals a strong nexus between cases involving receiving stolen property—including stolen vehicles—and shootings.

And the problem is particular and issue in North Jersey. According to data from the New Jersey Regional Operations & Intelligence Center (ROIC), auto theft is up 31% in the state’s CorrStat Region, which represents more than 80 municipalities in northeast New Jersey along the Route 21 corridor, including Newark. This area accounts for 63% of the state’s total motor vehicle thefts.

According to the State Police, the vast majority of auto thefts involve vehicles stolen when the key fob is left in the vehicle or the vehicle is left running. These incidents are commonly referred to as “crimes of opportunity.”

Thieves may commit several vehicle burglaries before finding a vehicle with a key fob to steal. Criminals use simple techniques— shared among car thieves via social media or by word of mouth—to steal vehicles and disable factory navigation systems.

“Reducing violent crime is a top priority for me, and we will do everything in our power to curb these thefts and keep our neighborhoods and residents safe,” said Platkin. “Meanwhile, we implore residents to not make it easy for car thieves by leaving a key fob in your car—not even for a moment—because your stolen vehicle could be used in the commission of a violent crime.”

Among the tips offered from law enforcement to prevent vehicle theft include:

“The public has to realize this is a very real and very dangerous problem that has implications far beyond the initial theft of a vehicle and carries into the realm of violent crime,” said Col. Patrick J. Callahan of the New Jersey State Police. “The technological resources at our disposal have allowed us to identify key trends and target offenders but to avoid becoming a statistic yourself, secure your vehicle and take the key or key fob with you.”

The New Jersey State Police established the Auto Theft Task Force. Since its inception in 2015, the task force has continued to expand and is currently comprised of 16 members, six of which are Task Force Officers (TFOs) from six partnering agencies, including the Division of Criminal Justice (DCJ) and the Westfield, Warren, Bernards, Middletown, and Paramus police departments.

The task force is currently in the process of expanding to include new assets, with the potential to expand further if circumstances warrant. In 2021, the Auto Theft Task Force conducted 33 vehicle theft investigations, made 75 arrests, seized five firearms, and recovered 130 stolen vehicles valued at approximately $5.7 million.

Law enforcement’s average time to recovery of stolen vehicles has been improving since 2016, which in part may be due to the deployment of license plate recognition technology and increased data sharing among law enforcement.

Data from State Police shows the time to recovery in 2016 was an average of 45 days. In 2021, the average time to recovery was significantly cut to 13 days, with 70% of vehicles being recovered within nine days or less.