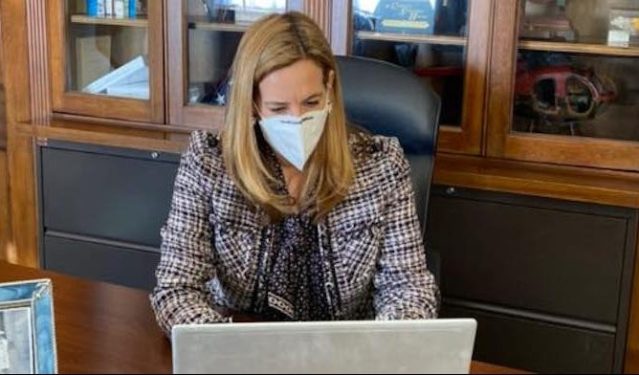 Rep. Mikie Sherrill is calling for a gas tax holiday on the heels of President Joe Biden’s March 8 announcement of a ban on U.S. imports of Russian oil.

“While we must do everything we can to stand up to [President Vladimir] Putin as Russia continues to wage a premeditated, unprovoked war on a fragile democracy, I am also fighting hard to address affordability here at home,” said Sherrill who represents North Jersey’s 11th congressional district.

“That’s why as we end all importation of Russian oil, I am calling for a gas tax holiday to ease prices at the pump,” she added.

Biden: ‘Decision Is Not Without Cost’

President Biden announced March 8 a U.S. ban on “all imports of Russian oil and gas and energy,” predicting that the move would “deal another powerful blow to Putin’s war machine.”

The president acknowledged that the move would cause U.S. gasoline prices to rise further.

The national average price for a gallon of gasoline as of March 8 was $4.173, according to the American Automobile Association. In north Jersey, gas prices on March 8 tracked slightly above the national average. AAA’s tracking app pointed to a high of $4.319 a gallon in Morris County to a low of $4.181 in Sussex County among the northernmost counties in the Garden State.

“The decision today is not without cost here at home.  Putin’s war is already hurting American families at the gas pump,” Biden said in a speech at the White House.

“Since Putin began his military buildup on Ukrainian borders, just since then, the price of the gas at the pump in America went up 75 cents.  And with this action, it’s going to go up further,” predicted Biden.

Almost two weeks after Russian President Putin invaded the Ukraine, President Biden outlined a long list of sanctions the U.S. and its allies have imposed on Moscow.

For her part, Rep. Sherrill expressed support for the ongoing efforts to “continue to put pressure on Russia to end their unprovoked invasion.” A U.S. Naval Academy alumnus, Sherrill served in the U.S. Navy for almost a decade as a helicopter pilot and Russian policy officer. She traveled to Kyiv, Ukraine in January to meet with President Volodymyr Zelenskyy and other top Ukrainian officials.

“While stepping up our sanctions on Russia is necessary to preserve freedom and democracy abroad, I deeply understand Americans’ real and legitimate concerns about the potential effect this could have on gas prices,” Sherrill said. “I will continue to push for additional steps our country can take to further bring down gas prices.”

Sherrill is not alone in calling for a gas tax holiday.

A group of five state governors, including Gov. Tom Wolf of neighboring Pennsylvania, wrote to U.S. congressional leaders March 8. Their letter expressed support for the Biden administration’s move to ban Russian oil imports and urged the U.S. Congress to act on House and Senate companion bills (H.R. 6787 and S. 3609) that would suspend the federal excise tax on gasoline of 18.3 cents per gallon through the end of the year.

North Jersey’s Rep. Josh Gottheimer, who has been advocating for a U.S. ban on Russian oil imports to punish Russia for its invasion of Ukraine, was pleased by the President’s announcement.

“Thanks to our bipartisan, bicameral push in Congress, the Administration is now banning the import of Russian oil to the U.S.,” Gottheimer added. “The Russians are killing innocent civilians, violating cease fires in refugee corridors, and escalating their horrific war. We need to hit Putin where it hurts.”

The Biden administration’s move to ban Russian oil imports marks a shift after the White House faced pressure from Congress.

Just days ago on March 3, White House Press Secretary Jen Psaki told reporters: “We don’t have a strategic interest in reducing the global supply of energy.  And that would raise prices at the gas pump for the American people, around the world, because it would reduce the supply available.  And it’s as simple as: Less supply raises prices.”

Two days later Ukraine President Zelenskyy was on a widely reported Zoom call with U.S. Congress members in which he urged the U.S. to stop purchasing Russian oil, among other measures to help his country.