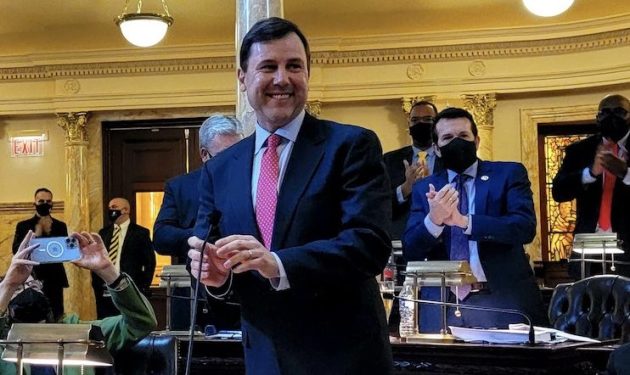 For the second year in a row, the Morris County Republican Convention produced surprising results. And this year’s version has not yet reached a conclusion.

Still to be decided is who will receive the sought after party line for the June 7 primary for the 7th and 11th Congressional District race. With Morris County making up large percentages of each district, being on the party line would provide a boost to the candidacy for those seeking to replace Reps. Tom Malinowski and Mikie Sherrill in November.

Online voting will begin on March 10 and in-person voting on March 11 at the Morris GOP headquarters in Parsippany. Only county committee members who voted on the first ballot are eligible to participate in the second ballot voting.

Kean has been considered the prohibited favorite to win the nomination after coming within 1% of defeating Malinowski in 2020. After redistricting, state and national GOP operatives have targeted Malinowski as a candidate to defeat in order to regain the House.

Kean entered the convention after winning the Hunterdon County GOP convention in February in a runoff with Peterson that saw Isemann finish third.

In the 11th, Morris County Commissioner Tayfun Selen and former Kinnelon Council President Larry Casha will battle for the nomination as the field was reduced from six.

Selen received 169 votes but fell about 15% points short of the 50% he needed for a first ballot win. Casha defeated third place Toby Anderson by five votes for second. Former Assistant Passaic County Prosecutor Paul DeGroot received 65 votes in his fourth place finish after securing the Passaic County line earlier this year. Attorney Larry Friscia (14) and former Ridgefield Park Councilman Robert Kovic (6) rounded out the group. The winner of the Morris County Convention is expected to have the inside track for the Essex line as well.

In the ensuing days, Casha and Selen have rolled out new endorsements before the runoff vote. Friscia has dropped his bid for the Republican nomination for Congress in New Jersey’s 11th district and endorsed Casha. And Assemblymen Jay Webber (R-26) and Christian Barranco (R-26) announced their support for Casha on the second ballot.

Selen received the backing of Kovic, who dropped his bid for nomination after the convention, and  fellow Morris County Commissioner Doug Cabana.

Problems with voting machines—and the subsequent departure of county committee members who didn’t stay past the first ballot—led to issues with voting. An attorney representing Rizzo complained that there were ballot irregularities as  well.

“I can’t tell you who’s responsible or what the actual cause of this is, but the bottom line is for a party that talks about election integrity—that is one of the fundamentals of the Republican Party from a local, state and national level—what’s going on right now is an absolute embarrassment,” John Coyle told the New Jersey Globe.

The race for Morris County Commissioner resulted in an upset with four-term incumbent Tom Mastrangelo not winning the backing of the party. He finished fourth in the race for three seats, behind Cabana, former Freeholder Christine Myers, and Mendham Township Committeewoman Sarah Neibart.

Florance-Lynch dropped out of the commissioner race with Mastrangelo has not said if he will run off the party’s county line.

The win by Myers comes after she left the board in 2018 to serve in the Trump Administration’s Small Business Administration. It is also the second convention upset since Morris Republicans switched from an open primary to an organization line in 2021. Last year, then Assemblywoman BettyLou DeCroce lost the convention vote to Barranco.