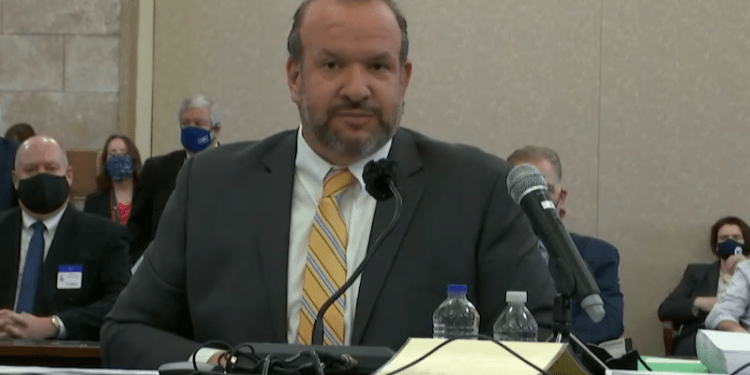 Embattled Labor Commissioner Robert Asaro-Angelo could be out of a job if Assemblyman Christopher DePhillips (R-40) gets his way.

The Assemblyman introduced articles of impeachment against Asaro-Angelo, arguing that his incompetency has turned lawmakers’ offices into “satellite unemployment offices.”

“Enough is enough and it’s time for a change,” he said.

DePhillips argued Asaro-Angelo was not performing the duties of his office, and that this contributed to residents’ suffering during the pandemic.

“The labor commissioner is simply adding insult to injury. Our unemployed residents deserve undivided attention and unlimited in-person help so they can receive the payments they rightfully earned,” DePhillips said. “It is what the Labor Department is supposed to do and since it’s not happening, the commissioner must go

As previously reported at North-JerseyNews.com, frustration has boiled over for both Republican and Democratic lawmakers. A resolution urging Gov. Phil Murphy to “immediately re-open” unemployment offices and address the unemployment backlog was unanimously approved by the full State Senate.

“I’ve never seen anything unify my caucus and your caucus like this ever before,” the Democratic lawmaker told his Republican colleagues,” State Senate President Nicholas Scutari (D-22) said March 3 during a Senate floor speech.

On the same day, the Department of Labor & Workforce Development said it would offer limited, in-person employment assistance beginning March 28 at some One-Stop Career Centers “for claimants who may have difficulty using mobile or online technology.”

For most Senators, this was not enough.

“For almost the entire time of the past two years, many if not most of our legislative offices have been open. Our employees have been coming to work. We have had to spend over 90% of our time doing the state’s job,” said State Sen. Holly Schepisi (R-39).

DePhillips said New Jerseyans shouldn’t be punished for the Labor Commissioner’s failures. He noted that Asaro-Angelo even blamed unemployed residents for the delays at one point.

“In the beginning of the pandemic, when there were more than a million people out of work, he said 94% of claims had been paid. It turned out that number included one-time payments and people who had received some money, but then had benefits unexpectedly stop,” remarked the former Wyckoff mayor. “All the smoke and mirrors in the world couldn’t hide the deficiencies at the Labor Department.”

State Sen. Joe Lagana (D-38) raised the issues of the State Senate being overwhelmed by requests from constituents for help on their outstanding unemployment claims, with little help or communication from Labor Department officials.

“We became a satellite office of the Department of Labor; we were not able to handle almost any other issue besides unemployment,” Lagana said. “And it got to the point where the communication completely ended… Out of over one thousand emails, only a handful were answered.”

“I am imploring you. My community wants to go somewhere. They want to see someone. Having two people at the site won’t cut it. I’m asking you to step up your game,” said Ruiz.

Lawmakers suggested opening options the state used during the pandemic to improve government services, including mega-sites similar to what the state used to distribute COVID vaccines, or use mobile centers like the Motor Vehicle Commission to help serve residents who have unresolved claims.

Asaro-Angelo said those solutions were not practical as people can walk away from an MVC mobile site with a registration or a license, but most outstanding unemployment claims can’t be solved that quickly, especially more complicated ones that have involved cross-state earnings, disability claims and employer disputes. Additionally, he stated being in-person will mean those agents won’t be able to help as many workers as they would be able to help by computer or by phone.