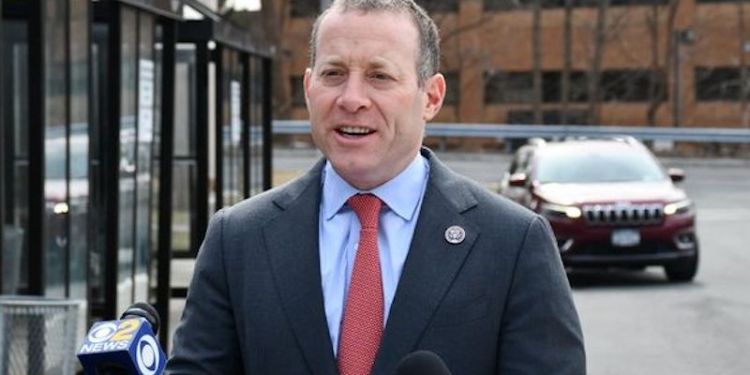 Rep. Josh Gottheimer is leading a House bipartisan coalition looking for answers before talks with Iran are concluded—especially in light of the Russian invasion of Ukraine.

Talks were expected to conclude in Vienna this weekend on an agreement bringing Iran back into compliance with the deal’s restrictions on its rapidly advancing nuclear activities and bringing the United States back into the accord it left in 2018 by re-imposing sanctions on Tehran. In the last hours however, the Russian government has demanded sweeping guarantees that Russian trade with Iran would not be affected by sanctions imposed on Moscow over its invasion of Ukraine.

[Editor’s Note: After publication, talks broke off Match 11 with no agreement due to Russian demands to soften the West’s sanctions on Moscow over the Ukraine invasion.]

But Gottheimer and 20 other members of Congress expressed their overall concerns in letter dated March 10 to President Joe Biden about the potential lifting of the Foreign Terrorist Organization (FTO) designation of the Islamic Revolutionary Guard Corps (IRGC) and of sanctions placed on the Supreme Leader.

“As negotiators continue their work, we must not forget where money will be funneled if terrorist sanctions are lifted on Iran,” said Gottheimer, who was the lead signatory on the letter. “Iran’s nuclear program and terrorist activities are not only regionally focused in the Middle East with Hezbollah, Hamas, and Palestinian Islamic Jihad, but also across the rest of the world.”

The coalition submitted 16 questions include a range of topics including whether the Biden Administration plans to bring the agreement to Congress pursuant to the Iran Nuclear Agreement Review Act (INARA), Iran’s estimated breakout time when the agreement is implemented, and what recourse the U.S. will have should Iran violate the agreement after the snapback mechanism in U.N. Security Council Resolution 2231 expires in 2025.

The Joint Comprehensive Plan of Action (JCPOA) was an agreement on the Iranian nuclear program reached in July 2015, between Iran and the five permanent members of the United Nations Security Council—China, France, Russia, United Kingdom, United States—plus Germany and the European Union.

After the Trump administration twice certified Iran’s compliance in 2017, the United States withdrew in May 2018 from JCPOA as former President Donald Trump pledged he would negotiate a better deal. Trump left office without fulfilling that pledge and analysts determined Iran had moved closer to developing a nuclear weapon since the American withdrawal.

The letter states “We hope that no agreement is finalized without additionally addressing these concerns. Without adequately addressing Iran’s role as the world’s leading state-sponsor of terror—which was noticeably absent from the 2015 JCPOA—and simultaneously providing billions of dollars in sanctions relief, the United States would be providing a clear path for Iranian proxies to continue fueling terrorism.”

Of particular concern is the security of the only Democracy in the region, Israel.

“Iran’s actions also continue to threaten the security and stability of our key ally Israel, and the entire region,” said Gottheimer. “The Iranian regime has actively financed a robust worldwide network of proxy groups that host terror cells in Eastern Europe, Latin America, Africa, and even in the United States. We need to address these concerns, so that we can combat the world’s leading state-sponsor of terror.”

Rep. Elaine Luria (D-VA) added, “If this deal goes through, we must ensure Israel has the means to respond to the resulting threats, and I will continue to stand against any deal that does not permanently prevent a nuclear capable Iran and does not make the Middle East and the world safer.”

The letter sought answers to the role of Russia and “will Vladimir Putin become the de facto judge of compliance with an agreement?” Specifically, the coalition wanted to know if Russia would gain any economic benefit from an Iran agreement and if Iran subsequently believes the agreement has been violated, or that it has not received the promised sanctions relief, will Russia be in a position to return enriched uranium to Iran.

“Our support will be contingent largely on satisfactory answers to the following questions.”

Rep. Tom Reed (R-NY) stressed that it is critical to get the answers needed regarding renewed negotiations with Iran, with the support of the lawmakers be contingent largely on satisfactory answers to the question, especially those regarding Israel.

“We can not take these negotiations lightly as we must recognize Iran’s role as the world’s leading state-sponsor of terror,” said Reed. “In any negotiation, President Biden needs to ensure Israel’s safety and interests are protected. It is fundamental that our questions are sufficiently answered in a timely manner.”