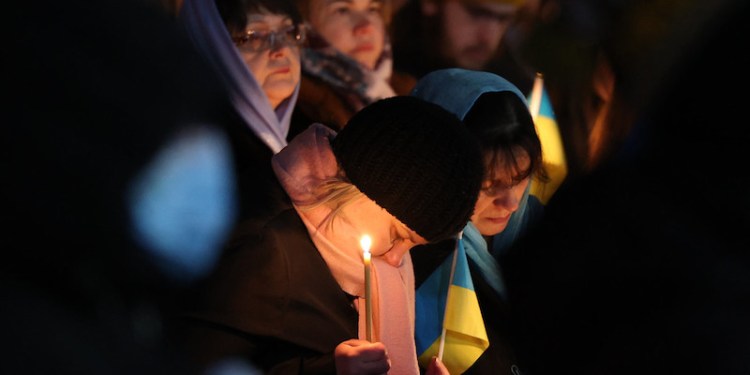 Twelve members of Jewish groups from Bergen County are preparing for a March 20 trip to Poland with needed supplies for Ukrainian refugees.

Members of the Temple Emanu-El of Closter are assembling the donations to bring to the border of Poland for Ukrainian refugees who have been displaced by Russia’s ongoing attacks on the Ukraine.

Rabbi David-Seth Kirshner, who is leading the endeavor, told CBS 2 News on March 14, “We want to be there to help others in any way we can. This is a small, small drop in the bucket of support, but it’s emblematic of what we stand for in our community. We stand shoulder to shoulder with the people of Ukraine, of all faiths and all backgrounds.”

The group’s efforts come as Rep. Bill Pascrell, whose 9th Congressional District includes parts of Bergen County, is urging the Biden administration to take in significantly more Ukrainian refugees in the United States and to move to resettle them faster.

“To meet this monumental challenge, I urge your administration to rapidly and significantly increase the number of refugees being resettled in our country,” Pascrell said. “I also implore your administration to quickly create an expedited refugee resettlement process for those fleeing Putin’s invasion, especially for those Ukrainians with familial ties to legal permanent residents in the United States.”

The group of 12 from Bergen County is heading to Poland, which, according to United Nations statistics, so far has taken in more Ukrainian refugees than any other country.

Each of the 12 will bring four or five camp duffle bags with supplies, given that shipping is so expensive and there are so many delays. They are bringing diapers, formula, and medicine, among other much-needed items.

Steven Rogers, chief executive officer of Kaplan JCC on the Palisades, told CBS the group will travel to JCC of Krakow.

“I think about the history of Jews and the holocaust was not so long ago and it just feels so much like that. It’s heartbreaking,” Rogers said. “It will also be nice to see our friends at the Krakow JCC, who, as you can imagine, have been working 24 hours a day, seven days a week and just show our support to them.”

Pascrell praised the Biden administration for “reversing the unconscionable, xenophobic refugee policies of your predecessor” by raising the Presidential Determination for refugee admissions to 125,000.

“However, as of February 28, 2022, the United States has only resettled 6,494 individuals this fiscal year. A nation of immigrants such as ours, founded on the promise to welcome those seeking a better life, should not fall short of meeting the current admission ceiling,” Pascrell wrote to President Biden.

Pascrell pointed to $1.4 billion in the federal supplemental appropriations law that is dedicated to the State Department’s Migration and Refugee Assistance account. The U.S. House lawmaker said the funds could be used to aid Ukrainian refugees.

“These funds can help raise the number of resettled refugees and assist Ukrainians forcibly displaced from their homes due of Putin’s war,” Pascrell said.