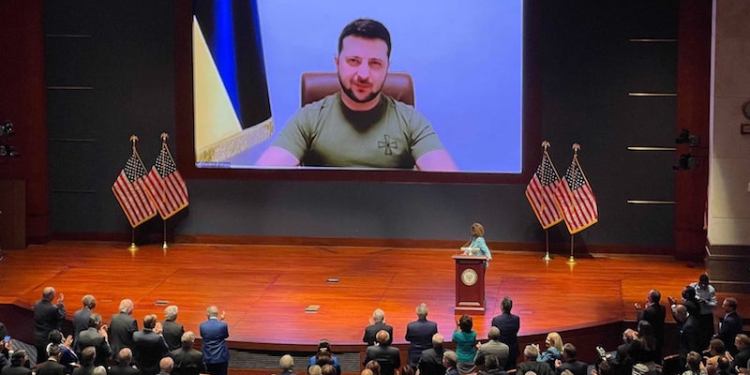 Sen. Bob Menendez didn’t mince words for Florida’s junior senator, Sen. Rick Scott (R-FL), who he cited as “singlehandedly undermining” the ability for the U.S. government to respond to the Russia-Ukraine war by blocking confirmation of officials tasked with supporting Ukraine.

What’s more, Menendez took issue with the fact that the confirmation was blocked just hours after Ukrainian President Volodymyr Zelensky addressed the Congress and asked the U.S. for more aid and support.

“It is amazing to me. My colleagues who got up to applaud President Zelensky. My colleagues who come to the Senate Floor to talk about both the need to help Ukraine and the humanitarian realities that are compounding every day,” said Menendez. “They get up and clap and then come to the floor to object to the very things that can help [Ukraine].”

Menendez said Scott made “extraneous excuses” for his objections, and refused to answer his request for a colloquy to further debate the merits of his obstructionism.

“My God, it is not right to hold up everything we are trying to do for Ukraine. This is a global emergency. The fate of not only Ukraine but democracy is on the line,” he said.

Sen. Roger Marshall (R-KS) also targeted by New Jersey’s senior Senator as well after blocking Menendez’s motion for the Senate to take up Erin McKee to be Assistant Administrator for Europe and Eurasia at the United States Agency for International Development (USAID). Marshall did not cite a reason for his objection.

Menendez also highlighted the nomination of Eliot Kang to the position of Assistant Secretary for the Bureau of International Security and Non-Proliferation, which was yet to be confirmed.

“Because of Republican delays he has not yet been confirmed, despite the fact that he was nominated 328 days ago,” he said.

A Break from Prior GOP Principles

Menendez said he couldn’t understand how the Republican Party, which was the party of “freedom and democracy” under President Ronald Reagan, were taking actions that benefitted Russian President Vladimir Putin.

An ‘Illegal and Unprovoked War’

Menendez, who serves as Chairman of the Senate Foreign Relations Commitment, characterized the conflict as “Putin’s illegal and unprovoked war.”

“The humanitarian crisis inside Ukraine is worsening every day. We can all see it for ourselves. You can see the images of Mariupol, where more than 200,000 civilians remain under siege, cut off from food, fighting for their lives,” said the North Jersey Senator. “You can see the frightened faces of children, crossing the border into Poland, carrying only a teddy bear and a change of clothes.”

“This is a trauma they will struggle with for the rest of their lives,” he said.

OPINION: Affordability at the Gas Pump

OPINION: Affordability at the Gas Pump