Rescue mission delivers supplies to those fleeing due to Russian invasion 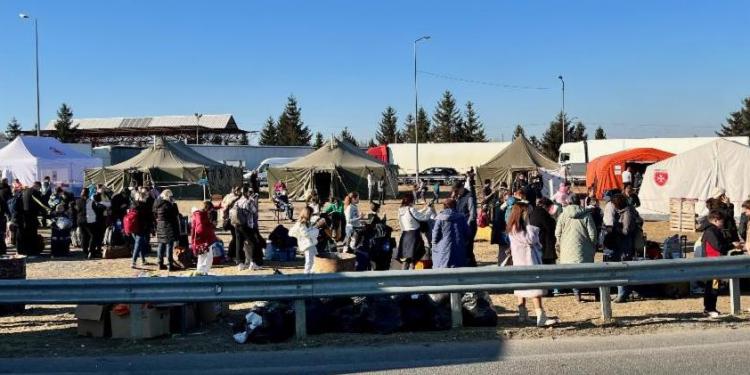 “My eyes sting from some of the sights we witnessed. My heart is full seeing how many people and countries are here to help…These are the real and human stories that give texture, background…to each soul.”

Rabbi David-Seth Kirshner of Temple Emanu-El of Closter posted those sentiments on Facebook during the three day mission he was a part of to Poland and Ukraine to help refugees fleeing from the Russian invasion.

Twelve members from Temple Emanu-El of Closter along with Kaplen JCC on the Palisades leadership, Congregation Ahavath Torah, and Jewish Federation of Northern New Jersey brought over 120 bags of supplies to help Ukrainians in Poland as they attempt to relocate while the war continues on.

Over the three days, the group visited refugees and organizations helping them in Krakow and Warsaw, on the border in Przemysl and inside of Ukraine itself.

The group’s firth stop was at the JCC in Krakow which is facilitating most of the triage points for all persons who are part of the refugee crisis.  Kirshner observed the materials sent would be put to immediate use as the JCC set up a shop where any person who needs any item can come and take what they need at no charge.

“Most importantly, they are doing it with grace and dignity for every soul. Beautifully, they are helping every person —Jews and Gentiles alike,” wrote Kirshner. “Baby food, clothing, hygiene products, and meds were just some of the things on hand. The shop was bustling, which is sad and sweet.”

Their first encounter with a refugee was with Anna, an English teacher who left her home in Kiev with her husband and two children the day the war started. She detailed how they drove across their country, waited in a line for 48 hours “with ZERO sleep and did not eat for four days, just to get across the border.”

Her family—that includes a sister and cousins—are living in cramped quarters with a high school classmate in a small flat. But Anna biggest concern is her disabled father still in Kiev who cannot leave

“He cannot even seek shelter when the missiles fly in. She is helpless thinking about him,” recounted Kirshner.

The group then headed to a central Krakow train station where Ukraine—mostly women and children—are huddled in corners and benches not knowing where their next move will be. The North Jersey residents gave the children candy they had packed “and their desperate faces lit up.”

Elderly and sick grandparents are provided a small room lined with cots. Corners of those rooms house donated food and soups and coffees and teas. Inside the station, there are kiosks giving out supplies people need such as water, juice, diapers and socks. But people have to ask sparingly and receive what they have on hand.

“All should know, the people and land of Poland are doing amazing things to aid in this crisis. Still, the conditions in and near the train station are harrowing and painful,” opined Kirshner “People do not know which train to take to which location or to stay put. Which track will bring hope?”

The Catholic Aid Society has set up large tents outside to provide hot meals. Next to that is a warehouse where people can get items they need while they last, such as a baby stroller.

“People sat in this station in despair, hopeless, and punished for no crime they committed short of being from Ukraine,” the Rabbi observed.

The group then went to a center that the JCC is partnering with other local organizations, that is registering people involved in the Refugee Crisis and finding vetted flats for them to stay in temporarily. Additionally, a daycare center for children has been set up that helps educate Ukrainian moms in the Polish language so that they can get by during this time. They are next to each other so kids are not separated too far from their parents.

“We have seen the worst imaginable and the best in humanity,” wrote Kirshner. “Seeing the children hurt me the most. Knowing these moms and dads love these kids so much, but having patience that is fried and are physically and emotionally exhausted takes its toll, (it) made me shudder.”

The group of 12 then made a three-hour pilgrimage to Przemysl, the largest town in Poland closest to the Ukrainian border and about 15 miles away from the crossing. The contingent first stop at a shopping mall that has been repurposed into an absorption center.

“Each shop in the mall has taken on a new task. A former shoe store now gives out blankets. A pastry shop is a pharmacy. The tech store is a daycare. The clothing store is a clinic and the luggage store is a hospital,” wrote Kirshner.

The largest space, described as about the size of the Shoprite in Englewood, was lined shoulder to shoulder with cots and blankets with about 2,000 people were inside. One corner had games set up where kids and adults were playing chess, another area was a charging hub for electronics.

“Moms were tired-eyed lying in bed or looking for something to be hopeful about,” he wrote. “When we walked in, a toddler had soiled his diaper. His mother had no place or way to clean him. Were this at home, she could run water or give him a bath. No such luxury exists here. It broke our hearts to witness her helplessness.”

Outside of this mall, buses dropped off people who had just come over from Ukraine; other buses were gathering people to take to their next stops in Poland.

The North Jersey group was then escorted to the border crossing of Merdeka. Kirshner observed that many fewer people are crossing with just as many—mainly men—crossing back into Ukraine to fight or are buying and bringing back supplies.

“When one crosses over at Merdeka, the first sight they will see is an Israeli flag, put up by the JDC,” wrote the Tabbi. “(The area was) a mini UN—a pathway and row of different countries offering support. We were moved to see the free food offered by the Sikh community food truck, the Egyptian triage tent, and the Italian paramedics. There are good people all over the world.”

The traveling party then crossed the border into Ukraine. All of the traffic at the border crossing was going in the opposite direction, a convoy of cars and trucks for miles and miles waiting to cross into Poland.

“We were the few going to Ukraine. In the convoy of cars were Audis, BMW, and Trabis—the wealthy, entitled and poor were all looking to get out,” noted Kirshner.

At the border crossing, the group witnessed a convoy of over 100 people exiting Ukraine and entering Poland, with the Rabbi observing “each face was out of central casting. All ages and of women and kids were represented. Almost no men. They were schlepping all of their belongings in nylon bags. I was excited to leave luggage for them that had wheels.”

After clearing immigration, they visited a hospital in Ukraine that is treating people wounded from battle. While nowhere close to battle lines, injured people are brought wherever doctors can provide care.

Kirshner said “the hospital was out of a 1950’s novel, like something from the remnants of the Cold War,” with a 40-year-old x-ray machine, the paint on the walls is chipping and an operating room on the 2nd floor that those needing surgery are carried on a gurney due to no elevator in the facility. Advanced bandages and medicines the North Jersey group brought was put to immediate use.

After donating extra supplies and snacks to the Archdiocese Kiosk set up in the railway station, the North Jersey residents departed for Warsaw.  There they visited the Focus Hotel, one of five leased by the JDC and The Jewish Agency for Israel to house people who identify as Jewish and have fled Ukraine with the hopes of making to Israel. The Focus currently is housing about 300-400 people.

The Israeli government has established a hospital as well as a mobile consulate to speed-process citizenship for each person. There have been almost daily chartered flights to Israel of over 200 people that immediately receive an Israeli passport and earn full citizenship upon arrival.

Kirshner wrote about the people who they meet there, including an 11-year-old girl, whom he described as “adorable with lots of spunk and moxie. She would regularly interrupt the interpreter to explain that whatever part of the story she was telling was most critical.”

The girl shared that when the sirens blared, the family packed a bag and left quickly. She explained the long and harrowing detail of the travails of her cat Messi, how he got lost and was found but it was the wrong cat.

“She cried every night worrying about her cat…(but) was relieved to learn her cat was found and is being reunited with her later this week,” wrote the Rabbi.

After a stop at the JCC Warszawa, the contingent met with Rabbi Michael Schudrich, Chief Rabbi of Poland. Rabbi Schudrich explained that as soon as the war broke out a Crisis Management System among all of the Polish Jewish network agencies was established.

“They were all flummoxed since it was the first time in 80 years that the Jews of Poland were not the ‘crisis’ and were part of the ‘management’,” said Kirshner.

Kirshner conclude his last post by writing “I know it sounds trite—but I swear it is heartfelt—each and every one of you has been with us every step of this journey. When I was informed today that a few thousand pounds of supplies arrived today in Lviv and in another town in Ukraine, near Mariupol, it brought a smile to my face knowing YOU made that happen.”

“I also want you all to know that the appreciation from the people of Ukraine AND the Polish leadership and citizenry knows no bounds. Thank you for being holy people engaged in holy work.”