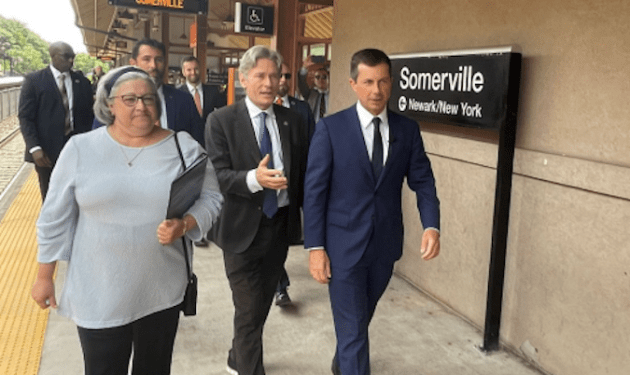 Rep. Tom Malinowski this week released a report to show where infrastructure funding from the federal government will be used in the 7th Congressional District.

According to the Congressman, the Infrastructure Investment and Jobs Act (IIJA) report shows municipal governments and district residents exactly how they can use the funding provided by the law to repair and improve local infrastructure, including road and bridge repairs, flood prevention, and expanding high speed internet.

“From fully funding the Gateway tunnel, to fortifying local infrastructure to protect against extreme weather events, the Infrastructure Investment and Jobs Act will deliver for New Jersey,” said Malinowski. “Many of my constituents are wondering how they will benefit, and this report is a resource for them and for local officials to understand how this funding will work for our towns.”

The report stated there are currently over 50 state-run improvement projects in Essex, Hunterdon, Morris, Somerset, Union, and Warren counties. Some major repairs include construction at the Interstate 80/Route 15 interchange in Wharton Borough, the Route 57/County Road 519 intersection in Lopatcong Township, and the Interstate 78/Route 22 connection in Greenwich Township.

As for bridges, the Federal Highway Administration rated in 2020 nearly 100 bridges across the district in “poor” or “serious” condition.” A poor rating indicates a bridge structure has “advanced section loss, deterioration, spalling or scour,” and a serious rating denotes “loss of section, deterioration…have seriously affected primary structural components. Local failures are possible. Fatigue cracks in steel or shear cracks in concrete may be present.”

Major projects include construction on the Interstate 80 Bridge over Howard Boulevard in Mt. Arlington, the Hamilton Road bridge over the railroad in Hillsborough, and the Route 22 Bridge in Clinton Township.

Besides roads and bridges, Malinowski has pushed for full funding for rail projects since being elected in 2018. Through IIJA, the Gateway Project is eligible to receive some of the $8 billion allocated toward the Capital Investment Grants program, while the Scranton-NYC Service that includes funding of the Lackawanna Cutoff could benefit from the $43.5 billion in grant funding provided to Amtrak to remove backlogs, improve service, and expand/repair rail corridors.

The report highlights the $15.4 million in federal money to New Jersey to build electric charging stations on designated Alternative Fuel Corridors. In NJ-7, there are three interstate highways that have been designated Alternative Fuel Corridors by the Federal Highway Administration—I-287, I-80, and I-78. Additionally, the IIJA expands several grant programs that can be used to invest in electric vehicle infrastructure.

In the district, public and private entities will be aided in their work to develop clean energy infrastructure. In 2021, the U.S. Department of Energy’s Advanced Research Projects Agency-Energy (ARPA-E) awarded $175 million across 68 research projects that support unique approaches to clean energy innovation. Nokia Bell Labs in Murray Hill recently received $2.1 million through this program.

In the Fiscal Year 2022 government funding bill, Malinowski promoted the nearly $9 million he helped to secure to fund community projects, including the water resource projects. Include in that was $250,000 going to Wharton Borough in Morris County that will help with sanitary sewer replacement, water main replacement, and full-width pavement restoration/milling and resurfacing along Washington Street.

The Congressman environmental benefits coming to the state, including $10 million for the Highlands Conservation Act and $12.5 million for the Delaware River Basin Restoration Program to be distributed by U.S. Fish and Wildlife Service. Other provisions include $23 million for the National Estuary Program to improve the water quality and ecological integrity of estuaries like the Raritan, Rahway, Elizabeth, and Hackensack rivers in New Jersey and $4.9 million for the Partnership Wild and Scenic Rivers program which helps rivers—like the Musconetcong—preserve natural and cultural resources as well as monitor water quality.

The report states that “Rep. Malinowski worked hard to reverse the U.S. Army Corps of Engineers’ previous decision to terminate a study” of Rahway River Flood Risk Management Project in Essex County. The project recently received an additional $1.5 million in federal support that will enable the study portion to be completed as “homeowners and business owners near the Rahway River have lived under the near-constant threat of flooding from heavy rains. After Hurricanes Ida, Irene, Floyd, and others, storm water poured into thousands of homes, caused millions of dollars in damages to local schools, and left thousands of residents without power, including many seniors.”

Additionally, the IIJA provide funding for high-quality internet service that “is necessary for Americans to do their jobs, to participate equally in school learning and health care, and to stay connected.” Currently, there are 48,330 residents without internet in Essex County, 12,187 people in Morris, 4,434 people in Warren, 6,642 people in Somerset, 20,096 people in Union and 2,967 people in Hunterdon.

“The bill secures billions of dollars for New Jersey to complete the Gateway Program, repairs outdated highways and bridges, upgrades our electrical grid, and makes our communities more resilient to storms and floods,” said Malinowski. “I will continue working with our state and local leaders to get dollars flowing into the 7th District.”