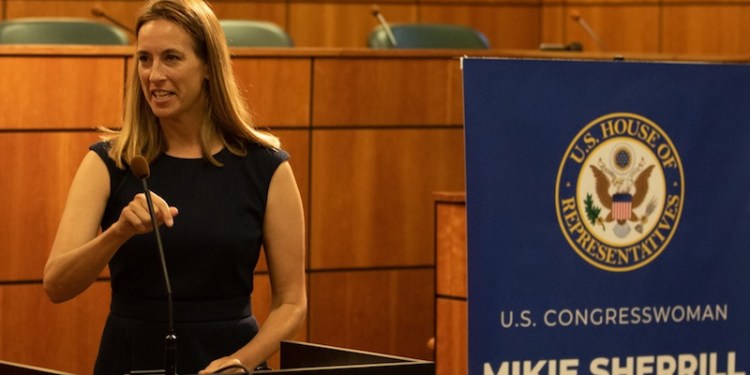 Rep. Mikie Sherrill is seeking a change in federal law to stop Russian President Vladimir Putin from using the Russian Central Bank’s extensive gold reserves to continue his invasion of the Ukraine.

With Russia’s currency, the ruble, crashing, the Russia’s central bank is said to be buying up gold. It had stopped buying gold when the pandemic prompted a spike in gold prices.

Sherrill and a bipartisan group of lawmakers on March 11 introduced legislation (H.R. 7068) that would prohibit U.S. “persons” or entities subject to U.S. laws from “engaging in transactions with foreign persons that purchase or transact in gold from the Russian Federation.”

Added Sherrill: “This bipartisan legislation closes a loophole to prevent Putin and his allies from circumventing sanctions through the sale of gold and other commodities. I stand with the people of Ukraine, and I am committed to ensuring that Putin’s Russia faces devastating consequences for perpetrating this violence.”

‘As Painful as Possible’

The United States and its allies have imposed a raft of sanctions against Moscow. Sherrill and the other sponsors of the “Stop Russian GOLD Act” say that their legislation, if enacted, would be one more step aimed at stopping Russia’s ongoing attacks on Ukraine

“As Ukrainian civilians are fleeing for their lives, we have to make the consequences for Putin’s barbarism as painful as possible for him and his regime, and we need to slam shut every door he could try to use to evade sanctions,” said Rep. Slotkin.

Fitzpatrick added “As the leader of the free world, the U.S. cannot afford to inflict weakly enforced half-measures when it comes to economic sanctions against Russia. We must continue to do everything in our power to fully isolate Putin and his cronies. Our bipartisan Stop Russian GOLD Act takes the crippling sanctions the US has already imposed one step further by freezing Russia’s gold reserves that are helping fund Putin’s war machine.”

The group said that their bill would impose secondary sanctions to anyone transacting with or transporting gold from Russia’s Central Bank holdings or selling gold physically or electronically in Russia.

Additionally, the legislation would direct the U.S. Treasury Department to develop “clear compliance guidelines for U.S. citizens to ensure Americans avoid unknowingly investing in or transacting with Russian gold,” Sherrill and the others said in a press release.

Russia is currently one of the biggest sovereign gold-owners in the world, with gold making up roughly 20%—or $130 billion—of the country’s total reserves.

Rep. Sherrill served in the U.S. Navy as a helicopter pilot. She now serves on the House Armed Services Committee.