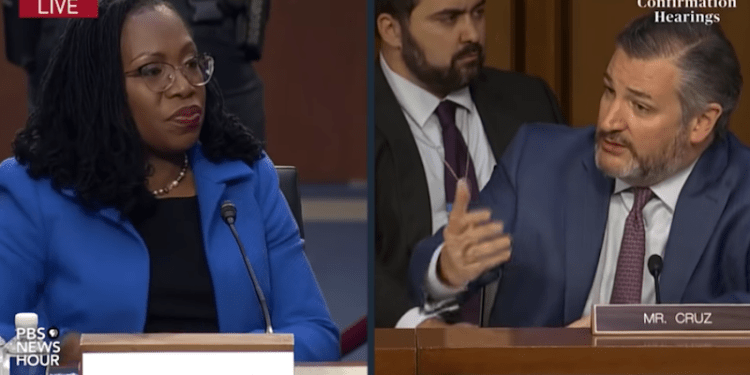 The U.S. Senate confirmation hearings last week were a historic moment—just for all the wrong reasons.

Watching the questioning of nominee Judge Ketanji Brown Jackson to become the first Black woman to sit on the Supreme Court should have been a thoughtful examination of her record, with members of each party exploring her professional and life experiences to see if she was deserving of receiving a lifetime appointment to the highest court in the land.

Instead what Americans were subject to was the continued legitimizing voices of extremists in the Republican party that is now their mainstream.

Let us declare here raising critical race theory in a law setting and Brown Jackson’s sentencing for child sex offenders are legitimate issues. And the answers provided by the Judge were worthy of follow ups.

But returning to the topic over and over again by Senators such as Ted Cruz, Marsha Blackburn, Josh Howley and Lindsay Graham felt more like warm ups for their Fox News hit that night rather than truly attempting to understand the judicial mind of Brown Jackson. Their performance—and that’s what it was—were aimed at those who think Jackson Brown was picked solely based on the color of her skin and not the content of her character and ability.

Cruz, as always, deserves a special heaping of scorn. Taking time out from monitoring his mentions on social media, the Texas senator made an issue of Brown Jackson serving on the board of Georgetown Day that was “filled and overflowing with critical race theory” as part of its anti racism efforts. It was later revealed the elite private schools where Cruz’s daughters are students have advocated a similar anti racism curriculum.

The irony of all of the political theater is the battle for the direction of the Supreme Court has been won by the GOP. Serving on the bench are five reliable conservative voters—Justices Clarence Thomas, Samuel Alito, Neil Gorsuch, Brett Kavanaugh, and Amy Coney Barrett—that will shape laws such as abortion rights in the near future.

The nomination hearings have increasingly been more about performance than assessing the nominees character and ability. Dems, after the stonewalling of the Merrick Garland nomination, have acted in a similar manner—especially with Kavanaugh. GOP complaints go back all the way to the unsuccessful nomination of Robert Bork in 1987.

New Jersey should be proud that Sen. Cory Booker, as the only Black member of the committee, was able to remind us of the historic moment that we are in should be celebrated.

“You have earned this spot. You are worthy. You are a great American,” said Booker as Brown Jackson dabbed away at tears. “This country gets better and better and better. When that final vote happens, and you ascend onto the highest court in the land, I’m going to rejoice. And I’m going to tell you right now, the greatest country in the world, the United States of America, will be better because of you.”

It was not only Democrats that showed the decorum and decency expected of U.S. Senators. An example of someone who used his time well was Sen. Ben Sasse (R-NE). Sasse asked and listened to Brown Jackson’s judicial philosophy in a way that differs from his in a respectful way, on issues including free speech on campus as well his insightful comments about cameras in the court.

“Cameras change human behavior,” he said. “I think we should recognize that the jackassery we often see around here is partly because of people mugging for short-term camera opportunities.”

The spotlight this week should have shone on Judge Ketanji Brown Jackson and her record in the examination of this historic nomination. But too often it reminded us of another Senate hearing—Sen. Joseph McCarthy’s hunt for communists in 1954—where thirsty Senators wanted the moment to be about them.

The four days of Senate hearings were democracy in action. Too bad the headliners were those seeking the spotlight for themselves.

Assemblyman Parker Space Announces This Will be His Last Term