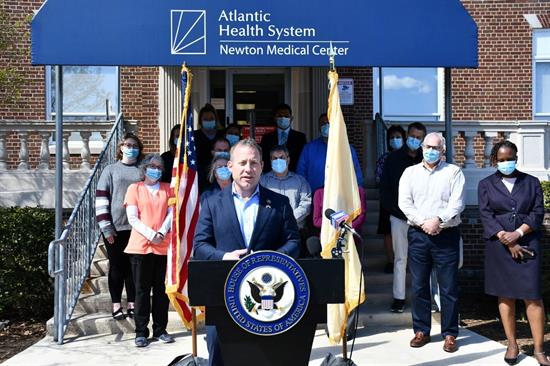 Recently allocated federal funding will go a long way towards improving the quality of life in Sussex County, according to U.S. Congressman Josh Gottheimer.

During a March 21 visit to the future site of the park-and-ride station in Andover Township — which will eventually serve the expanded railway between Scranton, PA and Hoboken — Gottheimer called on transportation agencies “to put aside bureaucratic stalling” and “unleash the resources we’ve allocated.”

Before construction can begin on the expanded railway, NJ Transit must address other work related to the project:

Funding for Phase One work has been set aside in NJ Transit’s current capital plan and the agency can also draw on the Bipartisan Infrastructure Bill approved earlier this year and signed into law by President Joe Biden.

Little Progress Has Been Made

“One of the major reasons I fought for rail and transit resources in the Bipartisan Infrastructure Bill that I helped draft, and that was signed into law just a few months ago, was that it would help invest in the Lackawanna Cut-off railway,” Gottheimer said.

Passenger trains last ran on the 28-mile Lackawanna Cut-off in 1970, freight trains ceased using the route in 1978 and the tracks were removed in the early 1980s. Rebuilding it would enable Amtrak to bring a commuter rail line between Scranton and New York City, with stops along the way.

While it has been long discussed by local, state and federal officials, as well as advocated for by commuter groups, little progress has been made on returning the Cut-off to service.

There are about 28,000 commuters a day to New York and eastern New Jersey from Sussex County and adjacent areas of Pennsylvania’s Pocono Mountains, according to Gottheimer.

“Sussex County residents have the longest commute of anyone in New Jersey, 38 minutes. And Vernon residents are said to have the worst commute in the entire state,” he said.

According to Amtrak’s Corridor Vision plan, which was released in May 2021, expanding service beyond the Cut-off into Pennsylvania will generate about $87 million in annual economic activity, plus $2.9 billion from one-time economic impact from construction along the corridor.

“There are zero options for folks in Sussex County to make their life easier and get on a train to get to work, or to see a family member…The Lackawanna Cut-off railway is a key part of the solution,” Gottheimer said.

Ongoing efforts to address the growing mental health crisis are also getting a boost.

At a March 22 press conference in Newton, Gottheimer highlighted the funding, saying it will help provide access to “critical behavioral health care services,” as well as ensure frontline healthcare workers have the resources they need.

“Today, thankfully, we are clawing back necessary investment to ensure Sussex County has even higher-quality behavioral health services. Our health care workers always have our backs when we need them most; we must make sure we always have theirs, so they can focus on providing the best care possible to our community,” Gottheimer said.

The funding comes as Newton Medical Center has seen an increasing need for behavioral health services, an uptick that has been attributed to pandemic-related stress and struggles over the past two years. Statewide, there has also been a significant spike in youth emergency room visits related to mental health.