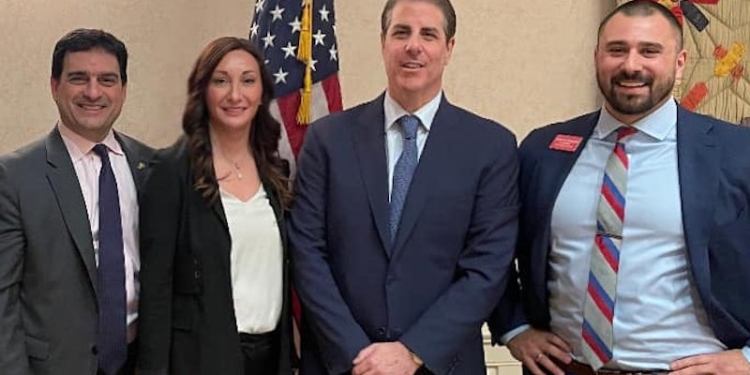 After winning the crucial Bergen County GOP line for the 5th Congressional District, Nick De Gregorio called on the other primary candidates to “join me” in his campaign to unseat Rep. Josh Gottheimer.

Instead, 2020 nominee Frank Pallotta and Cresskill businessman Fred Schneiderman answered that they are committed to running through the June 7 primary date.

De Gregorio won a decisive victory at the Bergen County Republican Organization’s Annual Convention March 23, receiving 302 voters compared to Pallotta’s 116, Schneiderman’s 15 and Seb Skenderi’s three. In the newly-drawn 5th Congressional District, Bergen County makes up over 80% of the population, and success there will be key to prevailing in the primary.

“I am honored beyond words to have received overwhelming support from the place I have called home for my entire life,” said De Gregorio, a U.S. Marine Corps combat veteran who served in Iraq and Afghanistan. “We will need all hands on deck to defeat Josh Gottheimer, and I ask my primary opponents to join me in this next phase of this critical campaign.”

But rather than joining De Gregorio, Pallotta and Schneiderman are pressing on with their campaigns to be the party’s nominee.

Pallotta outlined his plan to make the case directly to the voters by standing up to what he sees as the pay-for-play corrupt politics in Bergen County.

“With yet another Bergen County Republican Organization ‘rigged’ convention behind us, I look forward to winning the hearts and minds of voters once again in this June’s primary,” said Pallotta in a press release March 28. “Text messages recently released from BCRO leadership again prove that was the case. We’ve been here before; most recently in 2020 when I won the GOP primary by 20 points—without the Bergen County line.”

The 2020 nominee has the endorsement of the Passaic County Republican Organization and the Sussex County Republican Committee’s screening committee and boosted of being the only candidate who has been consistently campaigning across all three counties.

“My campaign is filled with impassioned, proud, ethical people who are not intimidated by party bosses and will not engage in the old way of doing business in New Jersey,” said Pallotta. “We need a change in Washington and need to rid our party of anyone who does not stand for principled Republican values. Those who continue the way of politics as usual where party support can be bought and sold, need to be shown the door.”

As for Schneiderman, his campaign decided to bypass the battles for the county lines and instead focus on a roll out TV, radio and digital ads expected to launch in the coming days in his bid to be the Republican nominee.

“This election will not be decided by political insiders making deals in backrooms,” Schneiderman said to the New Jersey Globe.  “It will be decided by the everyday unsung heroes in our community. As we enter the next phase of our operation, my team and I are excited to be taking our campaign directly to the people and fighting hard to earn every single vote.”

The buzz about the Schneiderman campaign has been around whom he has hired: former Donald Trump campaign manager Kellyanne Conway and Jamestown Associates, which has produced TV ads for Trump and for Chris Christie in 2009. And he recently hired Peter Finocchio, a former aide to Christie who has worked on campaigns in New Jersey and Virginia, as his campaign manager.

On his campaign Facebook page, Schneiderman is calling for full debates that were lacking in front of the various county screening committees. “The candidates have only had three-minutes to express their views,” he wrote. “That is not enough time for voters to make an informed determination between the candidates. Voters are entitled to a debate that will truly flesh our our differences on policy, experience and the best ability to flip the seat.”

The next key date for all three campaigns is April 15 when the first-quarter 2022 fundraising reports are due. Besides what he has raised at high-profile Washington fundraisers, De Gregorio has won the backing of the National Republican Campaign Committee’s “On the Radar” watchlist of promising Republican congressional candidates.

Schneiderman has not filed but reportedly has held a series of fundraisers, including one hosted by Conway and former New York Republican State Chairman Ed Cox, the son-in-law of former President Richard Nixon who lived in what is now the 5th Congressional District after leaving the White House.

Gottheimer is sitting on a campaign war chest of $11 million at last count.