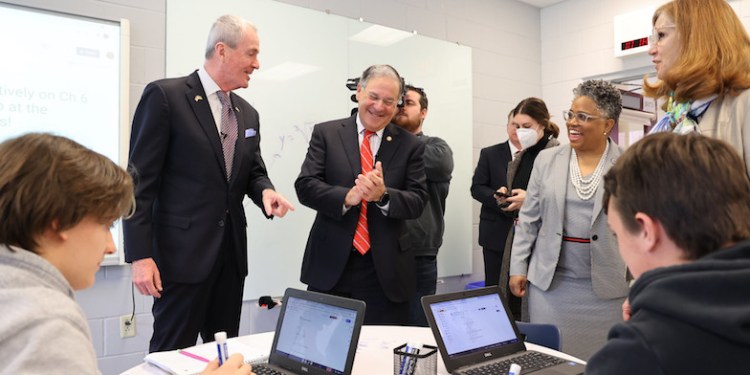 Gov. Phil Murphy expressed surprise as he stood inside a Chatham High School gym that had been converted into a lunchroom.

Michael LaSusa, superintendent for the school district, explained that the school day already was halfway over for the Chatham High School students whose school day begins at 7:40 a.m.

Just like that, a planned visit to highlight Murphy’s spending on schools shifted focus as the talk turned to the growing support behind the idea of delaying school start times.

The same day Democrats in the state Senate and General Assembly announced they had introduced identical bills (S 2462/A 3816) to push statewide high school start times in New Jersey to no earlier than 8:30 a.m. beginning in 2024-2025.

“When students are well-rested and eat nutritious meals they’re better prepared to succeed in school,” said Coughlin. “Overwhelmingly the research and success stories out of other states’ school districts show that the benefits of later start times to students’ holistic well-being, in terms of both mental health and academic performance, easily outweigh the costs.”

Gopal and Coughlin cited a 2017 study by the National Sleep Foundation, which found that teens starting school before 8:30 a.m. can be at heightened risk of experiencing depression and anxiety.

Their bill prompted praise from the New Jersey Chapter of the American Academy of Pediatrics (NJAAP) whose president said the group “enthusiastically supports” it.

Coughlin said that the high school start time legislation ties into his broader push to change how child mental health policy is understood and perceived in New Jersey, and to improve access, treatment, and integration of care across settings.

Shifting school start times involves many logistical challenges that include adapting for after-school sports and other extracurricular activities and managing transportation changes, but Coughlin said schools and their administrators have demonstrated their ability to be nimble.

“Nothing has proven school districts are capable of making rapid changes to adapt and optimize student learning more than the pandemic,” he said. “With clear evidence that a later start helps students, the opportunity to take action has arrived.”

After the Chatham High School event, Gov. Murphy said he is open to proposals to shift high school start times to later in the morning.

“There’s a fair amount of research that suggests it’s a better way to go to start later,” the governor said. “I’m absolutely open-minded to that.”

In attendance at the school with the governor were: Acting New Jersey Education Commissioner Angelica Allen-McMillan, State Sen. Jon Bramnick (R-21), Assemblymember Nancy Munoz (R-21), and Superintendent LaSusa, who has pushed for a later high school start time that will result with am 8:20 start next school year.

“You’re probably the most popular guy in town if you push the start of school back,” Murphy told LaSusa.