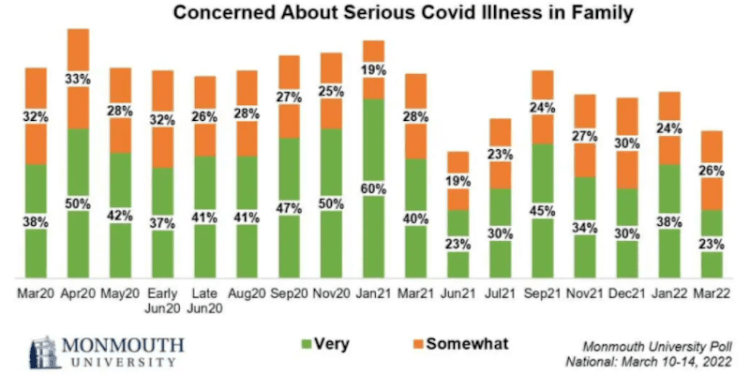 With the Winter surge firmly in the rearview mirror, Americans are ready to return to their normal routine understanding the coronavirus will play a role in their lives.

In a recent national Monmouth University poll, 73% of respondents agree with the sentiment that “it’s time we accept that COVID is here to stay and we just need to get on with our lives.”

Within this group who want to move on, identical numbers actually prefer adjusting COVID guidelines in response to new variants (42%) as say they want no regulations at all (42%). Another 14% of those who say it is time to get on with life want to choose a consistent set of guidelines.

“We asked the same question about accepting COVID is here to stay two months ago and got a similarly high number who want to get on with life,” said Patrick Murray, director of the independent Monmouth University Polling Institute. “Our working hypothesis was that many people who support mandates simply wanted consistency in the guidelines. This new data suggests that is not necessarily the case.”

The Jersey Shore polling outfit found 77% of Americans endorsed the Centers for Disease Control and Prevention (CDC) relaxing its face mask and social distancing recommendations in areas with low COVID rates. But when it comes to the possibility instituting or reinstituting face mask and social distancing guidelines in their state at the current time, the number is 34%—down significantly from 52% in January.

Support for requiring people to show proof of vaccination in order to work in an office or around people remains steady as 44% of respondents support it compared with 43% in January. From a political viewpoint, 69% of Democrats continue to back vaccine mandate and 60% a mask mandates, while at the same time saying they support the C.D.C. relaxing its COVID guidance (67%).

The poll found 50% prefer to see the government continue to adjust COVID guidelines and mandates in response to different variants as they arise along with 14% wanting to settle on a consistent set of protocols from this point forward. Thirty four percent want to do away with all COVID regulations and mandates.

“For some Americans, getting on with life means constantly being on guard and ready to reinstitute restrictions as new situations emerge,” said Murray.

As would be expected, a political divide exist Democrats want to maintain flexibility (82%) while most Republicans want to do away with all COVID regulations (67%).

The number of people who are very concerned about a family member becoming seriously ill from the virus sits at 23%, its lowest since hitting the same number in June 2021. This marks a 15-point decrease over the past two months (38% in January). The biggest drop in this concern has occurred among Democrats (30% now compared with 61% two months ago).

At the same time, 38% of American adults report having tested positive for COVID—an increase of 11% since January. Those having COVID climbs to over half when adding the 14% who responded they were diagnosed without a test or believe they had the disease at some point during the pandemic.

Vaccine uptake, particularly getting a booster shot, has stalled and the poll finds the rate is unlikely to improve by much. The poll, taken from March 10-14, found 48% of adults report having received a COVID booster dose while 33% say they are not at all likely to get it.

That result comes as federal regulators authorized second booster shots of the Pfizer and Moderna coronavirus vaccines on March 29 for everyone 50 and older, describing the move as an effort to bolster waning immunity against severe disease in case the virus sweeps the nation again in the coming months. The Food and Drug Administration said people in the age group could get the additional shot at least four months after their first booster. The agency also authorized a second booster for people 12 and older with certain immune deficiencies.

Ratings for how different groups in the country have been handling the pandemic have ticked up over the past two months, including for President Joe Biden (49% good job, up from 43% in January), federal health agencies (53%, up from 46%), state governors (59%, up from 54%), and the American public (35%, up from 29%).