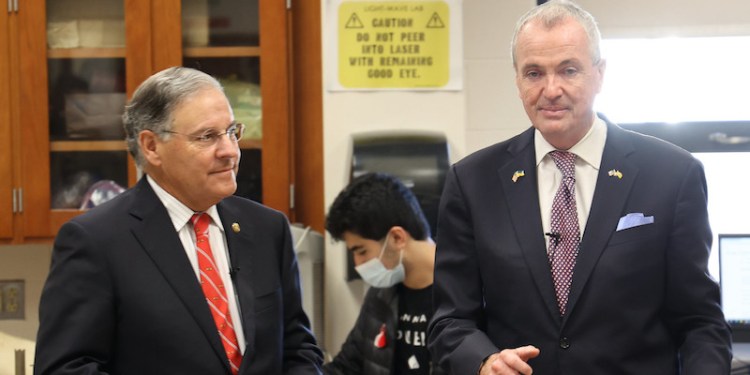 Gov. Phil Murphy has tested positive for the coronavirus.

His office made the announcement late afternoon on March 31. Murphy, who has led the state’s efforts to contain the spread of the virus, is fully vaccinated and has been an outspoken advocate of wearing a mask.

“This afternoon, as part of a regularly-scheduled testing regime, Governor Murphy took a rapid antigen test that came back positive for COVID-19,” the statement from the governor’s office released at 4:20 p.m. “He subsequently took a PCR test, which also came back positive. He is currently asymptomatic and feeling well.”

A contact tracing process has begun to notify everyone who may have come into contact with the governor during the potential infection window. Murphy most recent public event was meeting with local officials in Holmdel on Thursday morning to support a drive to donate medical supplies to Ukraine. Notably, he traveled to Philadelphia to support St. Peter’s in their Sweet 16 and Elite 8 games this past weekend.

According to a Murphy press spokesman, the governor per CDC guidance will cancel in-person events, isolate for the next five days, and continue to monitor for symptoms before taking an additional PCR test. Murphy will appear on his regular call-in radio show on WBGO in Newark on Thursday night but will conduct the interview via telephone instead of in-person.

During his appearance on BGO, Murphy said “I feel pretty good. I would have not taken the test on the way I was feeling, I took it because it was a regularly schedule one. Given all the rooms that I have been in the last 25 months, it’s probably a small miracle that I haven’t got nicked before….we are going to do what they want you to do when this happens.”

The press statement concluded with “The Governor has diligently taken precautions to limit the spread of COVID-19 and encourages everyone eligible to get vaccinated and boosted, as he has done, to protect themselves and their loved ones from the virus.”

Murphy said in the radio interview that after his five day quarantine, he will wear a mask when he is around anybody inside. He expects the virus to come in waves and was preparing to get his second booster shot.

When asked if he would consider rescinding the mask mandate, Murphy said “No we are not. If the numbers went dramatically against us, not gradually, you would have to leave that option on the table. But I don’t see it.”

This is not the first case for the Murphy family or those close to the governor—First Lady Tammy Murphy tested positive in January. And Murphy abruptly left a public event in October 2020 when he was told a senior staffer he was in close contact with tested positive. He would wind up testing negative.

Murphy has been cautious throughout the pandemic due to being in a high risk category. Murphy had surgery to remove a cancerous tumor in March 2020 on his kidney just days before the first cases of COVID was found in New Jersey.

Earlier this month, Murphy lifted the school mask mandate as well as the public health emergency associated with the coronavirus. The governor has alternated wearing masking while indoors—when he visited Chatham High School on March 25 he was not photographed wearing a mask inside of the building and a photo taken March 30 at the swearing in ceremony of Laurie Doran as Director of  New Jersey Office of Homeland Security and Preparedness showed Murphy maskless. But while visiting the St. Peter’s team at their Jersey City campus, he was pictured wearing one while interacting with the coach and players.

The news about Murphy comes as hospitalizations and deaths have declined since the Winter surge, but other key metric, most notably the rate of transmission, have begun to creep up.

On March 31, the state reported 1,143 new PCR cases and 374 probable cases, with two confirmed deaths. The rate of transmission was 1.01, meaning that each positive case was passing on another positive case. The rate was about half earlier this month. The Percent Positivity as of March 26 was 5.7%, a higher percentage due to it being a weekend sampling.

As for hospitals, there were 331 in 70 of 71 hospitals reporting throughout the state; there were 140 patients in North hospitals, 109 in the Central and 82 in the South. A total of 58 patients were in intensive care units, 33 of them on ventilators. Fifty nine patients were discharged.

At his last COVID press conference March 4, Murphy cautioned that while the state was lift restrictions it did not mean that the virus would just go away.  “I would love to say that this is over and has come to an end….it’s not. We think we can responsibly live a normal life with COVID. But an endemic means it remains in our midst.”