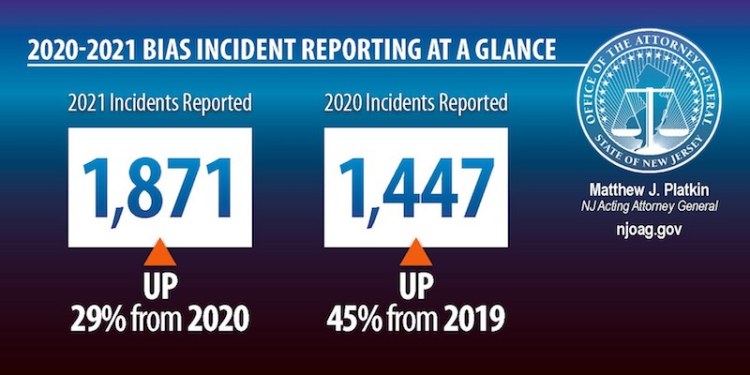 Bias incidents in New Jersey are up 29% in just a year, according to preliminary data that state Acting Attorney General Matthew J. Platkin announced.

New Jersey Division on Civil Rights Deputy Director Rosemary DiSavino called the increase “alarming,” but said each year’s bias incident report “equips us with the information necessary to push the scale towards justice.”

“We must all continue to work towards a New Jersey free from hate, discrimination, and bias,” DiSavino said. She urged anyone who has been subjected to bias-based harassment or discrimination in housing, or the workplace, or other venues to file a complaint with the Division on Civil Rights.

Anti-Jewish bias was cited as the motivation for 347 reported bias incidents in 2021, or nearly 19%.

Another notable increase, the AG’s office said, involved reported bias incidents against Asian people. There were 69 reported incidents involving Anti-Asian bias in 2020, compared with 129 incidents in 2021—an 87% increase.

The AG’s office noted that the preliminary total of 1,871 reported bias incidents in New Jersey for 2021 means that the state has hit a record high for the third straight year.

The AG’s office said that the “dramatic increase” in reported bias incidents in recent years “is likely due in part to several statewide improvements in reporting.”

“New Jersey has made a concerted effort over recent years to encourage people to feel comfortable reporting bias incidents to law enforcement, to make it easier to file a report, and to ensure that law enforcement agencies respond appropriately to all such reports,” the AG’s office said.

But better reporting only partly explains the uptick, the AG’s office said. The Division on Civil Rights analyzed data from 2019 to 2020 and pointed to social and political factors such as the pandemic, backlash against the Black Lives Matter movement, and racially charged rhetoric around the 2020 election.

“Unfortunately, we are seeing a rise in reports of bias incidents nationwide, and the Garden State is no exception,” Murphy said in a statement. “That’s why the work being done in the Attorney General’s Office to encourage people to feel comfortable reporting bias incidents to law enforcement and to address the root causes of hate is so important.”

“New Jersey has been a nationwide leader in taking comprehensive steps to prevent and combat prejudice and hate, but this year’s record-high number of reported bias incidents should serve as a reminder that we still have plenty of work to do.”

Reports of bias incidents are compiled by the New Jersey State Police. The AG’s office gave the caveat that the 2021 statistics are preliminary and remain subject to change as reports are finalized.

State officials urged the public to report bias incidents to their local police departments, online at https://bias.njcivilrights.gov, or by calling 800-277-BIAS.