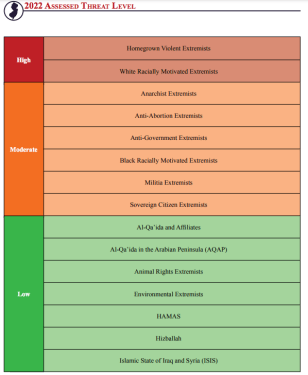 The New Jersey Office of Homeland Security and Preparedness (NJOHSP) released its 2022 Threat Assessment, the 14th annual version of the report.

The report is designed to analyze New Jersey’s threat landscape for the coming year, with a focus on counterterrorism, cybersecurity, and resiliency efforts.

“The COVID-19 pandemic and instances of civil unrest over the past few years exacerbated a threat landscape that continues to grow more diverse and innovative,” said NJOHSP Director Laurie R. Doran.

Threat of Domestic Terrorism on the Rise

“My office’s unwavering commitment to protecting communities throughout New Jersey is driven by intelligence development and information sharing capabilities,” added Doran. “Just as domestic and international extremists adapt their operations to an ever-changing environment, homeland security and law enforcement professionals must also enhance their strategies to combat these threats.”

Overall, the state agency argued domestic extremists would return to pre-pandemic operating norms, with a shift in focus to local expansion and low-level criminal activity. Over the past two years, NJOHSP said domestic extremists had leveraged national events to justify violence across the U.S.

NJOHSP noted homegrown violent extremists (HVEs) and White racially motivated extremists remained the most prominent threats to New Jersey in 2022, with both groups listed in the “high risk” category.

In 2021, the agency noted White, racially-motivated extremists would work in small cells to distribute propaganda throughout the Garden State.

Meanwhile, the report noted foreign terrorists organization posed a low threat to New Jersey despite their continued dedication to combating the U.S.

NJCCIC reported there were over 3,100 ransomware incidents in 2021, including high-profile attacks at Colonial Pipeline and JBS Foods. However, small- and medium-sized businesses (SMBs) were also attacked.

The average ransom demand for third quarter 2021 was $140,000; however, the overall costs is often much higher than that figure.

Additionally, NJOHSP are on alert for foreign actors that could play a part in cyberattacks on U.S. companies and individuals.

“In general, nation-state actors carry out cyber attacks to advance their foreign policy interests and increase their influence on the world stage, while decreasing that of their adversaries. Motivations include espionage and exfiltration of intellectual property, disruption and destruction of information and systems, sowing social discord, and financial gain,” the report read.