The Congressman's bill would establish a commission set up to review rules that are outdated, conflict with others 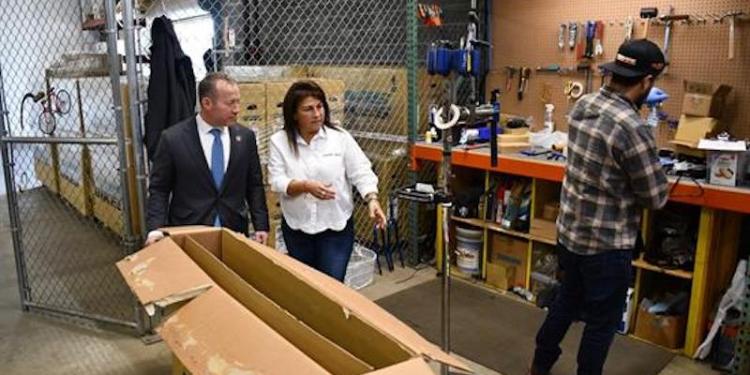 “The stories from Jersey businesses are endless about how long inspections take, or how the town will order one change to a project, the business spends tens of thousands fixing it, and then another official comes in from the state and orders it to be undone. One state agency contradicts another and seems to look for any little thing to hold you up,” said Gottheimer April 4.

The Congressman later added “Unfortunately, we have many of the same issues at the federal level—and they trickle down to the states. Government bureaucracy comes up with new rules that contradict other rules and layers on new ones without actually getting rid of the old, out-of-date ones.”

The proposed legislation would create an independent, bipartisan commission—the Regulatory Improvement Commission—to review rules that are outdated, duplicative, or in conflict with one another. The commission will present its recommendations to Congress for a simple up or down vote, providing the opportunity to cut tape at the federal level.

The three term lawmaker stressed that both Democrats and Republicans will play a role in cutting outdated and unnecessarily burdensome red tape to help unleash more economic opportunity, create jobs, cut taxes, and save Americans money.

“In my opinion, we should reassess these rules every few years and see if they’re still needed,” he said. “We also need to streamline the approval process when we send resources to the states, like the recent help for broadband and infrastructure that we passed out of Congress.”

“Towns have come to me looking for guidance on how they can invest the resources and even the Treasury Department can’t figure out or offer final guidance on the 400-page manual they created to allocate the resources. It’s insane.”

Gottheimer noted the federal and state can learn from local models that have worked. He cited Paramus that in 2016 voted to update their rules, all with the goal of encouraging business expansion. The borough additionally developed a program for self-inspection and certification that makes it easier and quicker for businesses to get their inspections and certifications done.

“I think this approach should be adopted statewide,” he said. “Paramus has increased its revenue by approximately $2 billion dollars as a result. That’s billion with a B. That’s led to more jobs and a huge savings on property taxes for Paramus residents.”

Gottheimer made his case at Jamis Bikes in Northvale, where owner Carine Joannou detailed the frustration of having to take so much time to deal with government paperwork that takes away from trying to expand the business.

“Residents and businesses are moving out of the state, and it is difficult for businesses to start here and grow,” he stated. “Research also shows that business owners who live in Jersey pay twice as much as they would somewhere else.”

The Wyckoff resident said he often hears from small business owners that is not always easy to do business here as they have to compete not just in the international markets but the domestic one as well.

“When we’re competing with the rest of the country, from Florida to North Carolina to Texas, and including a few miles from here in Pennsylvania, it’s almost as if there is a ‘No business need apply’ sign in our state window,” he said. “After speaking with everyone from mom-and-pops to the biggest businesses, New Jersey seems to take the red tape cake. It’s time to change the ingredients…I’m ready to fight back, and steal back some of the jobs and people that other states, and other countries, are taking from us.”

Gottheimer added the legislation is part of his Affordability Agenda for New Jersey, which includes improving the supply chain and cutting taxes.

“It’s time to lower taxes for small businesses and families and make it more attractive for jobs here,” he stated. “I’m the first one to say we need appropriate guardrails to protect our families and communities — but not ones that are added for the sake of it or just to hold up job creation that families need to put food on the table. What we need is more common sense.”