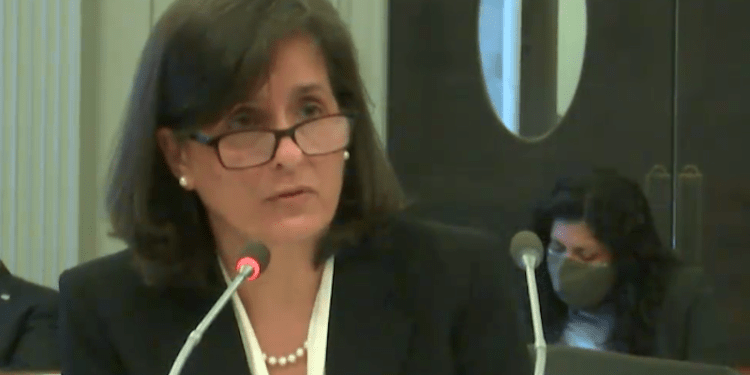 New Jersey’s state treasurer struck a note of cautious optimism as she discussed the state’s recent revenue surge and positive revenue forecast in testimony before the Assembly’s budget committee April 4.

“Erring on the side of caution is not just wise, it’s warranted on the heels of a historically volatile time for revenues, coupled with an entirely new revenue stream that no one fully understands yet—in the form of the Pass-Through Business Alternative Income Tax,” Muoio said.

Analysts from the state Legislature’s nonpartisan Office of Legislative Services offered rosier estimates at the hearing, forecasting the state will take in approximately $3.2 billion more than Treasury anticipates in fiscal years 2022 and 2023.

Muoio said she was “very happy” to hear that OLS “sees even brighter news in terms of forecast revenues”—am estimate that factors in the “incredible March revenue numbers” that came in after Murphy’s budget message was finalized.

“However, while we recognize and understand additional growth in the forecast, it is important to note that the majority of the difference between our forecast and OLS’s forecast is represented by…two of the State’s most volatile and unpredictable revenues,” Muoio said, referring to the Corporate Business Tax and the Pass-through Business Alternative Income Tax.

“That, together with international and national economic concerns for FY 23, regarding interest rates and supply chain issues, would suggest a more cautious approach should be taken,” Muoio said.

Testifying at the hearing, David Drescher, section chief for revenue, finance, and appropriations at the Office of Legislative Services, said he thinks Murphy’s revenue expectations “are reasonable even though they are substantially lower than our expectations.”

“As always, events in the world could ultimately prove us all wrong,” Drescher added.

“Although the COVID pandemic seems to be abating, we continue to face high levels of uncertainty about future revenues, so some caution on the part of budget makers is warranted to account for growing downside risks,” he told lawmakers.

Thomas Koenig, budget and finance officer for the Office of Legislative Services, expressed concerns that while the governor’s spending blueprint “meets the constitutional requirement” of a balanced budget, it is predicated on drawing down $1.7 billion in state surplus funds to cover proposed spending that would exceed expected revenue.

That surplus drawdown, Koenig said, would decrease the state’s surplus from $6.3 billion to $4.6 billion.

“A budget that relies on $1.7 billion in surplus to be balanced is not sustainable in the long run when the surplus is $4.6 billion,” Koenig said. “Maybe revenue growth will continue to surprise us and will close, or at least considerably narrow, the gap.”

“In somewhat flippant terms, this budget proposal could be viewed as engaging in deficit spending when revenues are exceptionally energetic,” Koenig later added after discussing the state’s record revenue collections.

Nonetheless, Koenig noted that a review of items in Murphy’s budget plan that would increase spending by $50 million or more yields a list of provisions that “either enjoy broad support, are legally required, or benefit populations few wish to harm.”

When the State Senate Budget and Appropriations Committee held its first hearing on April 5, Chair Paul Sarlo (D-36) used the term “nonnegotiable” as he called for language to be added to the annual budget to ensure both the legislative and executive branches of state government play a role in determining how the remaining COVID-19 federal money is spent.

“I believe we should have a seat at the table,” stated Sarlo.

Muoio suggested that Murphy has not changed his position and referred to a Budget-in-Brief document recently published by the Murphy administration that says the governor and lawmakers will work together in 2022 and 2023 to allocate remaining funds towards short-term recovery and long-term restart efforts.

“I’m not going to speak for (the Governor), but I know he has repeatedly said he wants to work with the Legislature on this, and I’m assuming that language will be discussed as we get through the budget process,” said Muoio.

She highlighted provisions that would:

“And I would just like to note that should we continue to see additional revenue growth, the administration would like to devote even further dollars towards debt reduction as well,” Muoio said. “That’s a conversation we welcome with the Legislature.

New Jerseyans Do Not See Murphy as Presidential Material