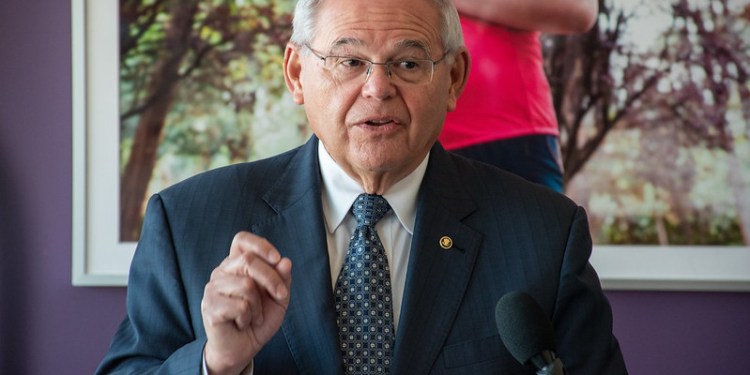 New Jersey’s U.S. senators say they are pleased with the Biden Administration’s decision to lift a public health order known as Title 42 that blocked many asylum claims at the U.S.-Mexico border during the COVID-19 pandemic.

Still, Sens. Bob Menendez and Cory Booker, both Democrats, are urging restrictions on asylum seekers to be lifted in phases rather than all at once on May 23 as planned by the Biden administration.

“We are glad that the Administration has made the decision to end Title 42 expulsions,” said Menendez and Booker, who called the measure “a Trump-era relic that prevented the Department of Homeland Security from implementing our immigration laws and enriched smuggling networks by allowing vulnerable migrants to make multiple dangerous trips across the border.”

“It failed to protect public health and instead created chaos at the border and hurt asylum seekers fleeing prosecution and torture,” Menendez and Booker said of Title 42 in a statement.

The Centers for Disease Control and Prevention (CDC) announced on April 1 plans to end Title 42, a policy implemented by the Trump Administration in March 2020 during the initial onset of the coronavirus pandemic. Under the order, most asylum seekers who were apprehended at the southern border were immediately sent back to Mexico or to their home country without the chance to file their asylum claims.

“After considering current public health conditions and an increased availability of tools to fight COVID-19 (such as highly effective vaccines and therapeutics), the CDC Director has determined that an order suspending the right to introduce migrants into the United States is no longer necessary, the CDC said.

The Biden Administration’s move to end Title 42 is controversial even among Democrats with the more progressive members seeking removal of the restrictions and others in the party raising concerns.

Additionally, the announcement of the Title 42 policy’s end prompted three states—Missouri, Louisiana, and Arizona—and their attorneys general to sue the federal government.

The states’ complaint argues ending the public health order’s restrictions could cause a crisis at the Southern border by removing “the only safety valve preventing this Administration’s disastrous border policies from devolving into an unmitigated chaos and catastrophe.”

The complaint quotes four Democratic U.S. senators’ criticisms of the policy shift to bolster its argument against easing COVID-related southern border restrictions on asylum seekers. Among those quoted is Sen. Maggie Hassan (D-NH) who said, “Ending Title 42 prematurely will likely lead to a migrant surge that the administration does not appear to be ready for.”

Menendez and Booker’s statement points at a different approach to guard against the kind of surge feared by Hassan and others both inside and outside the Democratic party.

“While we support ending Title 42, extending this policy until the end of May will only incentivize more irregular migration to the border and create an unnecessary bottleneck effect when it finally sunsets,” the New Jersey lawmakers said.

“We hope the administration will expand exemptions to the original order and start lifting Title 42 in phases,” they added.

These exemptions already have been used to help Ukrainian refugees at the southern border, they said, in urging the Biden Administration to start processing families of all nationalities immediately.

“Waiting any longer before starting to process migrants with asylum claims will only allow smugglers to exploit even more vulnerable people and increase operational challenges at the border,” they said.

The Biden Administration’s move to end Title 42 by could derail the $10 billion, bipartisan COVID relief funding bill. U.S. Senate Republicans voted to block the relief bill, which they want amended to reinstate Title 42.

Responding to a reporter’s query at her April 5 briefing, White House Press Secretary Jen Psaki said decisions on Title 42 should “remain independent of the urgently needed funding (for COVID aid.) This is a decision made by the CDC.  It’s a public health decision.”

While Menendez favors ending Title 42 restrictions on asylum seekers, he pressed Health and Human Services Secretary Xavier Becerra at an April 5 Senate Finance Committee hearing on how his department was preparing for the “likely increase” in unaccompanied children arriving at the southern border.

“Last Spring, very concerning reports emerged regarding the conditions for unaccompanied children housed in HHS emergency intake sites. And at that time, the Department officials expressed their intent to depopulate and close these short-term facilities as soon as possible,” Menendez said. “However, as of April 1st, there were still two emergency intake sites open, housing approximately 2,100 children.”

Menendez asked, “Is the Department still committed to closing these emergency intake sites and placing unaccompanied children with long-term shelters in your licensed care provider network?”

“That is the goal, senator, because it’s required by a court decision as well, and so we make every effort. Every spot, every slot, every bed that we can find that is under a licensed care facility we use,” Becerra responded.

The HHS secretary added, though, that many of the licensed care facilities “disappeared because the system was dismantled by the previous administration.”

“We have worked hard to build it up, to increase the number of licensed care facilities, but when there aren’t enough, we still have the obligation to care for these children. That is when we do stand up these emergency facilities,” Becerra said.