by North-JerseyNews.com
in Court
0 0
0 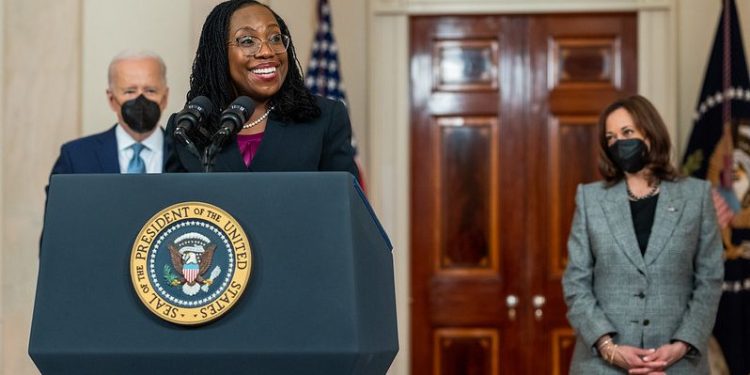 The Senate on April 7 confirmed Judge Ketanji Brown Jackson to the Supreme Court, making her the first Black woman to be elevated high court in the U.S.

After a concerted effort by conservative Republicans to derail her nomination, Judge Jackson was confirmed on a 53-to-47 vote, with three Republicans joining all 50 members of the Democratic caucus in backing her.

President Joe Biden and Judge Jackson watched the vote together from the Roosevelt Room at the White House.

Below is a collection of statements on the historic selection:

“For the first time in America’s history, a Black woman will sit on the highest court in our nation’s land. Like many Americans, I feel immense pride and so much joy at this historic occasion.

“As Judge Jackson ascends to the United States Supreme Court, I see in her the affirmation of our ancestors who suffered the indignities of this country yet sacrificed to bend the moral arc of our nation towards justice. They knew that America, though haunted by its past failings, was not bound by them and believed that a day like this would eventually arrive.

“Judge Jackson brings to the court a unique set of experiences. She has clerked at all three levels of the judiciary, including for Justice Stephen Breyer. In 2005, she became a public defender, embarking on the noble work that is a cornerstone of our justice system. Since then Judge Jackson has continued to serve our nation, first as Vice Chair of the U.S. Sentencing Commission and then on the federal bench. Her sterling credentials have earned her broad support and this will be the fourth time that the United States Senate will confirm her to a role she was nominated for in a bipartisan manner.

“Throughout her confirmation hearings, Judge Jackson has displayed poise and grace, and I commend President Biden for nominating her. He has found the right person to serve as the 116th Justice of the Supreme Court, and I am overjoyed to cast my vote in favor of a brilliant jurist who will inspire generations to come.”

“I want to congratulate Judge Ketanji Brown Jackson on her appointment to be the next U.S. Supreme Court Justice.  She is a brilliant legal mind with the highest character and integrity.  Justice Jackson has served at all levels of the legal system and brings decades of legal experience to her new position.  Her work as a public defender gives her an understanding of how legal decisions affect the lives of all Americans.  I am proud that President Biden has fulfilled his campaign promise to select an African-American woman for the Supreme Court and applaud the Senate for confirming such an exceptional judge.  Today is a historic day in America.”

“With our vote today to confirm Ketanji Brown Jackson as an Associate Justice of the Supreme Court, not only has the U.S. Senate made history, it has also witnessed — in real time — the bending of the moral arc of the universe towards justice and proved to women and girls everywhere that they too can be one of the nine guardians entrusted by the Constitution to ensure equal justice under law for all people.

“As only the second Supreme Court Justice ever to have served at all three levels of our federal judiciary, I have no doubt that, given her impeccable credentials and lived experiences, Justice Jackson will faithfully carry out the duties entrusted to her by the Constitution. Her extensive knowledge about what the law can do, what it can limit, and what it can unlock make her an outstanding Justice who will usher the highest court of the land to a new era — more clearly reflecting who we are as a nation and what we stand for as a fair, just, and hopeful people.

“As I cast my ‘yes’ vote on behalf of New Jerseyans everywhere, I could not help but think of what this meant for the three angels in my life — my granddaughters, Evangelina, Ofelia, and Olivia. After today’s historic vote, they will grow up knowing that, thanks to trailblazers like Justice Ketanji Brown Jackson, there isn’t a single thing they can’t accomplish.”

“Judge Ketanji Brown Jackson’s bipartisan confirmation to the U.S. Supreme Court proves that, even in these politically polarized times, progress can be made. Her success in becoming the first Black woman to serve on our highest court shows that our 233-year effort to form a more perfect union, and a government that is truly representative of all Americans, continues. We have no doubt that the intelligence and command of the law that Judge Jackson displayed throughout the confirmation process – a process degraded by baseless and shameful partisan attacks upon her character and record – will be the hallmarks of a historic tenure on the Supreme Court.”

“In February President Biden fulfilled his campaign promise to nominate the first Black woman to the Supreme Court and today, she was confirmed by the United States Senate in a bipartisan vote that represents a major step forward for equality. Judge Jackson is tremendously qualified as an accomplished lawyer, public defender, and distinguished federal judge. She has proven to be a brilliant legal mind with impeccable character, integrity, and understanding of the law and will make the Supreme Court better reflect the diversity of New Jersey and our nation. I commend Senator Booker and Senator Menendez for championing Judge Jackson’s historic nomination, and I especially want to thank Senator Booker for his impassioned remarks defending Judge Jackson in the wake of absurd partisan attacks.

I also want to recognize the incredible fortitude and grace Judge Jackson showed during her confirmation hearings in the face of a barrage of partisan attacks and bad faith arguments from Republican Senators. Black women everywhere understand the disrespectful treatment that Judge Jackson was forced to endure, because they see it in their own lives all too often. This confirmation is a testament to the key role women of color play in our most important institutions as well as our society, and seeing Judge Jackson take her place on the Supreme Court will be a day long remembered as a reflection of the progress America is making toward full equality and equity for all.”