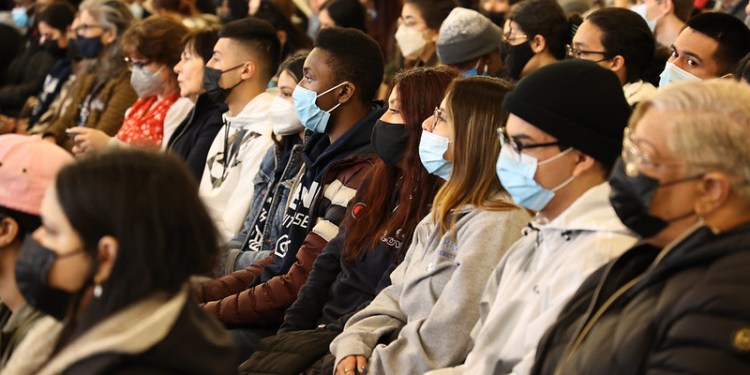 Key Democratic constituencies may be more moderate than the party itself.

That’s according to a recent Stockton University Poll, which found that Black, multiracial, and Hispanic voters were more moderate on a host of issues when compared to the Democratic platform.

Overall, these minority voters still mostly supported liberal positions tested in the poll, but the percentages supporting more extreme positions were at least a few percentage points lower than the Democratic party as a whole, a few points higher for more moderate positions.

“On any given measure, the difference on the ideological scale may be only a few percentage points,” said John Froonjian, director of the Hughes Center. “But the pattern of more Black and multiracial voters being moderate was consistent on the vast majority of issues polled.”

Froonjian added, “On no issue did a higher percentage of Black and multiracial voter support the more liberal position.”

While 70% of Democrats overall supported the recreational use of marijuana, only 64% of Black and multiracial respondents supported legalizing marijuana in that capacity, according to the poll.

Meanwhile, 27% of those minority voters supported legalization of marijuana if used medically only; 22% of all Democrats supported this viewpoint.

One area of agreement was in regards to policing, with 11% of minority voters and the Democratic party overall wanting to defund the police. Equal numbers (51% for both) believed the nation should reduce incarceration rates.

Seventy-eight percent of Black and multiracial respondents said religion played a very important role in their lives. This was markedly higher than the 60% of Democrats who answered the same way.

Minority voters (47%) were less likely than Democrats (55%) to support abortion’s legality in all cases, and 21% of Black and multiracial voters saw abortion as morally wrong. That’s in comparison to 16% of Democrats.

The finding of the Stockton poll mirrors results in a recent in a Monmouth survey when it comes to minority voters. Support for President Joe Biden has softened among Black, Latino, and Asian residents in New Jersey, dropping 18 percentage points. Biden holds a 51% approval to 40% disapproval rating among the cohort, down from May 2021’s 69% to 24% positive margin with this group.

President Biden has a net negative job rating of 45% approve to 50% disapprove in New Jersey, a state he won by 16 points in 2020. The drop caused Patrick Murray, director Monmouth University Polling Institute, to state it “suggests he has lost enthusiasm among core constituencies in his own base.”